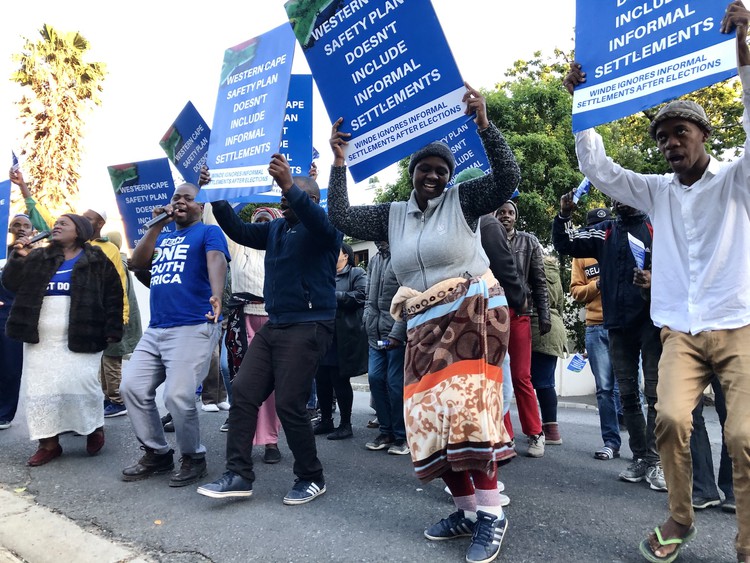 “If the Premier can come to our homes when he wants us to vote, we, the residents of Marikana informal settlement, can come to the Premier’s house to demand safety and services,” read a pamphlet handed out by protesters to passing cars in the Gardens neighbourhood.

One of the organisers, Daluxolo Naki, lives in Marikana. He said Winde had promised the people of Marikana that their settlement would be re-blocked, and would get drains. “None of those things happened,” said Naki. “We tried to speak to Mr Winde, we wrote him letters. The last time he communicated with us, he said his diary is full. He cannot even see us this year, maybe next year by March.”

Police arrived shortly after 6:20am and monitored the protest. One SAPS officer told GroundUp that public order police were on their way, but just as a precaution. He acknowledged the protesters were just singing and not a threat.

Zukiswa Qezo, one of the organisers from Social Justice Coalition, said the Premier had promised he would come to Marikana to talk to residents, but he had not. “There are no streets in Marikana. The police can’t patrol around the settlements where there are no streets and it’s dark. The city was supposed to put five mast lights, but they only put two. The people of Marikana are angry because they want to talk to the Premier.”

In May, soon after announcing his new cabinet, Winde responded to a protest outside the provincial legislature by promising to visit the informal settlement. “Before marching to the legislature ask your leadership to make a call to me. Invite me for coffee. I want us to start to work differently. Call me, I will even come there,” he said then.

When protesters approached the second gate, police told them the Premier was not there, but they were welcome to stand there. The protesters carried on singing, blowing whistles and dancing.

In response to the protesters’ demands, Bianca Capazorio, the Premier’s media spokesperson, told GroundUp: “In respect of Marikana, intervention efforts are made difficult by the fact that the area is illegally invaded private land. A court case is currently pending and due to be heard in the early part of next year which could unblock this situation and allow for us to provide services in the area. We look forward to that outcome so that we may begin to plot a way forward to assist.”

“It must also be noted that SAPS, a national government competency, is primarily responsible for safety and security of persons, including those living in Marikana, yet to date we have seen the failure of the police to protect these residents.”

“Our safety plan is the province’s response to this failure: we are doing all that we can to fill the void left by the agencies rightfully in charge of fulfilling this mandate.”

“It must also be noted that Premier Winde does not currently live in Leeuwenhof. In the current economic climate in which the national governments are cutting provincial budgets, he is looking at ways to maximise the use of this property, which will add to the provincial fiscus.”

She said Winde had visited Marikana the week after the May protest.

Winde is currently on a four-day cycle tour from Saldanha Bay to L’Agulhas to promote safety and mobility in the Western Cape.