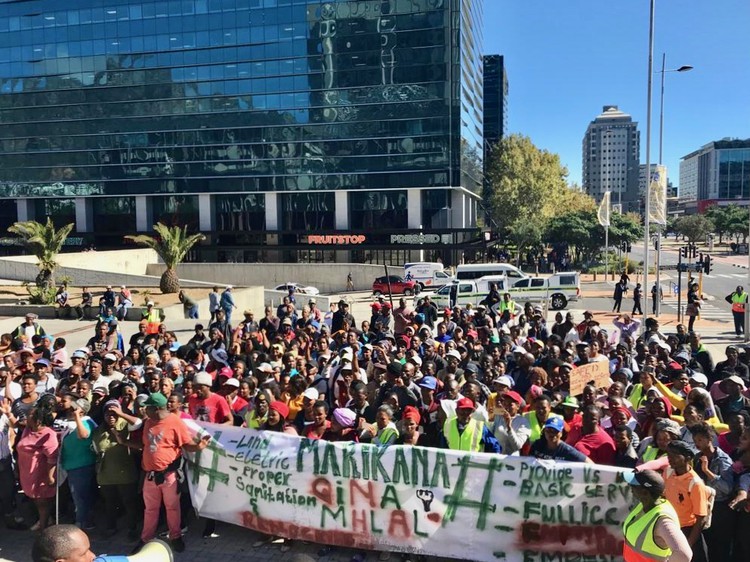 It’s been six years of uncertainty and grief for the estimated 60,000 people living in Marikana, an informal settlement in Philippi on the Cape Flats, and also for the owners of the land. But there is now a legal light at the end of the tunnel.

Lawyers acting for Socio-economic Rights Institute (SERI), on behalf of the Marikana residents, packed their legal briefs and headed to the Supreme Court of Appeal (SCA) in Bloemfontein expecting a tough three days, from Wednesday through Friday.

The matter had been set down as an appeal from the Western Cape High Court which had, in a nutshell, denied three owners of the land, East of Cape Town International Airport, the right to evict the occupiers.

The owners, 86-year-old Iris Fischer, Manfred Stock and Copper Moon Trading, were aggrieved, as were the City of Cape Town, and the Western Cape Provincial Minister of Human Settlements.

But on the direction of the SCA, they abandoned the appeal and instead a negotiated agreement was made an order of the court.

SERI candidate attorney Kelebogile Aplane told GroundUp: “Two weeks before the hearing the court sent correspondence to all parties that they must engage and negotiate, but the parties did not find each other.

“On the day of the hearing the court instructed the parties to negotiate until they found each other and we were able to make a settlement.”

The order provides for the City to purchase the properties at a price to be determined by arbitration. The arbitration panel shall be agreed upon by all parties and shall consist of a retired judge, a senior counsel and professional property valuer.

The price shall be determined in accordance with expropriation legislation and the Constitution.

There will be a strict timetable for the filing of claims and statements and the ultimate award, cannot be appealed.

“This is an enormous victory for our clients,” said Aplane.

“The courts have once again affirmed the rights of the poor people against evictions that lead to homelessness. This order secures the right to housing to thousands of men, women and children in the settlement.

“The order further takes into consideration the rights of the owners who will now receive compensation for the loss of their land. The purchase of the land by the City of Cape Town Municipality was the only reasonable response to this situation. An eviction of the occupiers was neither realistic nor practical.”

Thousands of people began moving on to the vast tract of undeveloped land about seven years ago.

As Judge Chantel Fortuin, who heard the matter in the Western Cape High court, pointed out: “What do you do with 60,000 people who no one can, or wants to accommodate?”

While the action taken by the different property owners over the years differed and involved different legal strategies, in essence they all claimed their Constitutional rights to property had been violated.

Fischer, who lived with her two adult sons on the 2.7 ha property, said the land had been in her family for over half a century.

At the time of the occupation, they were only using about 5% of the land. The rest was unfenced and undeveloped.

Manfred Stock had owned his land for 40 years while Copper Moon had bought its land in 2007 and was waiting for rezoning and planning permission for an industrial development and business park.

The residents of Marikana claimed they had nowhere else to go. They were desperately poor and no-one cared about them. The City of Cape Town, it was argued, had a 70-year housing backlog.

It was pointed out that any eviction on this scale could not be humanely carried out. But Judge Fortuin said there was no reason why the state could not acquire the land.

“While the SCA has disapproved of buyout as a remedy, it has given the nod of approval to expropriation in situations where it is not possible to provide alternative land,” the judge said.

She directed the City to initiate the process provided for in terms of the Housing Act, by entering into good faith negotiations to purchase the Marikana land, and expropriating the land in the event that purchase negotiations failed.

In written opposition to the subsequent appeal, SERI argued that the high court correctly identified the standard expected of the state in responding to land occupations of this nature.

This required the state to respond reasonably to an occupation and that the only legal basis on which the state parties to this case can take steps to acquire the properties on which the occupiers reside is to exercise the City’s powers under the housing act.