“She went from being a property owner to living at the middle of an informal settlement. … This is her primary residence.” 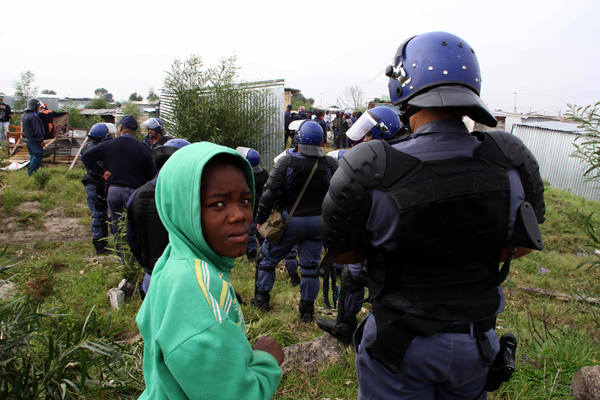 Residents of Marikana informal settlement in Philippi East filled the court on Thursday for the second day of their application to decide whether or not they will be losing their homes.

Yesterday, the court heard why some of the owners of the land wanted the City to buy their land instead of evicting the occupiers. Today, two more landowners also argued that they didn’t want an eviction.

Read an analysis of the case.
Read our daily court reports of the Marikana, Philippi East court case.

One of the owners present in court was 80-year-old Iris Fischer, who has been living at the property for over 50 years. The property was left to her by her husband. She owes the City R150,000 in rates.

Advocate Shafia Mahomed, who is representing Fischer, said her case was different from the other applicant for two reasons.

One was that the City of Cape Town had assisted Fischer since 2013 more than four times with evictions. The City had also sent Fischer a letter advising her to bring an application to evict the residents.

Originally, Fischer’s application had called for an eviction or to buy her out. But in the heads of argument Fischer’s lawyers admit that an eviction would not be “just and equitable”.

The second reason for the case being different was that Fischer was living at the property at the time the land was occupied. “She went from being a property owner to living at the middle of an informal settlement. She is not a commercial property owner. This is her primary residence,” said Mahomed.

Advocate Peter Corbett, representing a company owning part of the land, Copper Moon, said the City had established a Temporary Relocation Area in 2004, which was meant to be dismantled in 2008, but that didn’t happen and has now grown into the Marikana informal settlement with 60,000 residents. “To add an insult to injury, not only does the City stand back and watch this happening without taking any action, they then go and provide services for people living unlawfully at this property … We know that the City does buy private land.”

“I submit that the respondents have not furnished any satisfactory explanation for their failure to take up this matter … preventing the unlawful invasion,” said Corbett.

Both advocates referred to a meeting organised by the City and held on 18 August 2014 where Fischer’s lawyers were present. They said that the meeting had no outcome as the City did not do anything after that.

The City only filed an application with the province in November 2016 to assist with purchasing land to relocate the residents, two years after the meeting.

“Why wait two years? The City should have finished its application immediately after the meeting … They are the authors of their own misfortune,” said Mahomed. (The province has not yet indicated whether it will give the City land or money.)

“It is clear that at this stage all the major players were aware of what was happening in Marikana,” said Corbett.

Advocate Ralph Kujawa, who represents some of the residents, spoke on the emergency housing programming in which the City hopes to place the residents. He said that at best this promises to take three to five years. “They [residents] are not asking for houses, they are asking for a piece of land to enable them to erect a shack … That in itself is a question that speaks of undesirable poverty and desperation.”

“It is astounding. It leaves me speechless, and in fact this is not the kind of country I contemplated living in when we voted in 1994,” said Kujawa.

The case will continue on Friday.