Mantashe: I didn’t give the go-ahead on Xolobeni 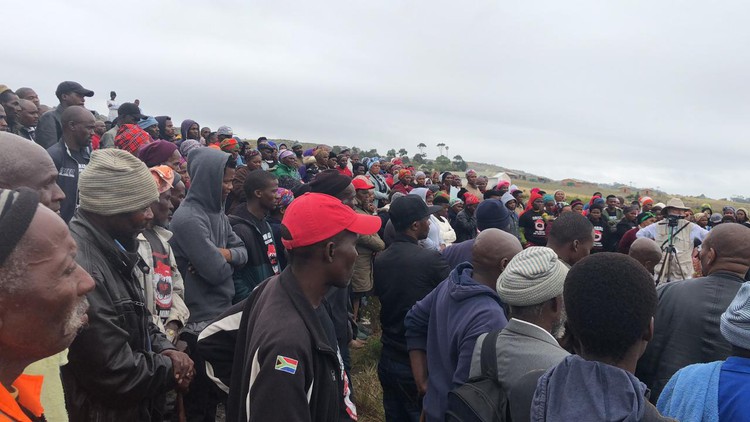 Mineral Resources minister Gwede Mantashe has distanced himself from reports by Australian company Mineral Commodities that the government is sympathetic to its mineral sand mine in Xolobeni in the Eastern Cape.

In spite of the Department of Mineral Resources proposing a 24 month moratorium on mining in the area, the Amadiba Crisis Committee (ACC), which is opposed to the mine, says it has “reliable information” that Mantashe has already promised to renew the mining licence. This is in spite of strong opposition.

The committee revealed that Mineral Commodities had told investors that the “New South African Government Leadership is Pro Development of Project”. MRC, which is listed on the Australian stock exchange, made this claim in a presentation to investors on 24 August.

But in response to questions from GroundUp, the Department of Mineral Resources said, “The Department cannot infer why the company would indicate as such in its investor reports.”

The department confirmed that Mantashe had met MRC in Australia, but said: “Minister Mantashe met with the company as well as other Australian companies active in South Africa, as part of efforts to engage with the investment community to promote investment in South Africa’s mining sector, in line with the Department’s mandate.”

Mantashe held a meeting in Xolobeni on 23 September after an invitation from the ACC.

The ACC said 400 to 500 people had been bussed in to support the mine and opponents had been removed from the meeting by police using tear gas and stun grenades. It said 100 riot police had been present. When ACC’s attorney Richard Spoor asked Mantashe to intervene, the committee said, he had been “attacked with bottles and chairs”. It said ACC spokesperson Nonhle Mbuthuma had been pushed to the ground by five police officers and teargassed.

Spoor was arrested and appeared in the Bizana Magistrates Court on 25 September on charges of incitement to violence, assault of a police officer and refusing a lawful order. The matter was adjourned to 25 October.

The ACC said Mantashe had not spoken to any of its leaders or to any community member opposed to mining.

Asked to comment, the DMR told GroundUp: “All parties present were given an opportunity to present their views either for or against mining, including a representative from the Amadiba Crisis Committee. It’s unfortunate that a small group of people were instigated to disrupt and suppress discussions, but the meeting proceeded as planned.”

“Following this visit the Minister now has first-hand knowledge and understanding of the issues in Xolobeni and will be able to take a more informed decision moving forward, on the moratorium as well as on other matters pertaining to Xolobeni.”

In a statement on Monday, Amnesty International condemned the “excessive use of force” by the police in Xolobeni. Executive director Shenilla Mohamed said Amnesty had received “witness testimonies, video footage and photos” indicating that the SAPS had used tear gas, stun grenades “and death threats” to disperse protestors.

“It is unacceptable that the SAPS resorted to violence and threats to disperse peaceful protestors. The police must remember that community members have the right to peaceful assembly. We must not forget the tragedy that happened in Marikana in 2012, and the repercussions it has had for that community and beyond.”

Mohamed called for an investigation and also called on the SAPS to drop all charges against Spoor.

In a statement on Tuesday, the Royal Family of AmaMpondo ase Qaukeni also expressed concern about Spoor’s arrest. Queen Regent Lombekiso Sigcau said the arrest had taken place during “what was supposed to have been a peace building consultation between Minister Mantashe and the local residents of Xolobeni who are directly affected by plans by an Australian mining company MRC Ltd to mine their ancestral lands for heavy mineral deposits”.