Principal says money to be used for next year’s fees 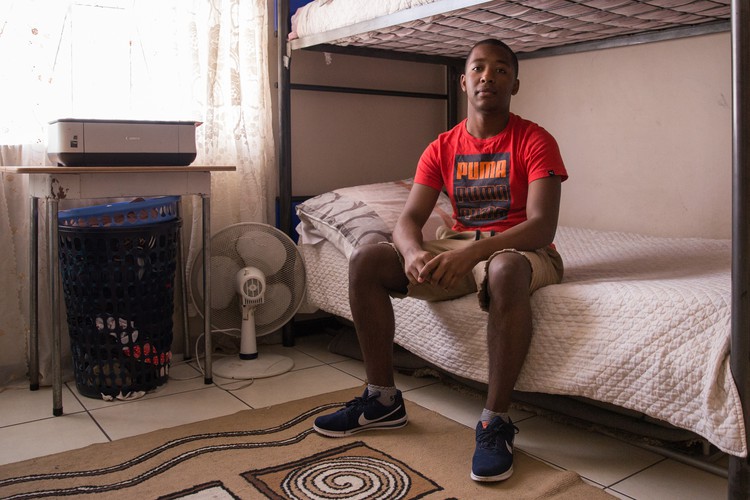 Robin Adams was hit when he was 13 by a stray bullet just outside his home in Athlone during gang violence. He is now in a school for special needs. Photo: Ashraf Hendricks

The parents of a Manenberg teen, who received donations from generous readers, are taking the Eros Special School to court for withholding the funds.

The school’s principal says it is all a big misunderstanding and that the school is acting “in the best interest of the learner”.

On 29 January, GroundUp published an article (republished by News24) describing the struggle of Shereen Adams and her husband Ewald with their son, Robin. At the age of 13, Robin was hit in the head by a stray bullet, just outside his home on the outskirts of Manenberg. He had been playing soccer with his friends. As a consequence of his injuries, Robin, who is 18, is enrolled at Eros, a special needs school in Athlone.

The family relies on Ewald’s modest salary and they struggle to make ends meet. Robin’s school fees are R417 per month plus R364 for transport. When the article was published there were outstanding school fees; how much was not disclosed to GroundUp. A number of readers contacted the family directly offering to help pay Robin’s fees.

Shereen Adams said that they asked donors to make payments directly into the school’s account using Robin’s name as a reference. “We were so thankful when we found out that all of his outstanding fees was paid up until the end of this year. They told us that the school governing body (SGB) was going to meet to decide what to do with the excess money. We were upset because that money was for Robin, not for the school,” she said.

“We spoke to the principal and asked him to release the other money that was donated [in excess of what was due to the school]. The last we checked there was about R8,000. That’s when we got a letter from the school on 14 February to say that they will only give us back the money when he leaves the school,” she said.

She said as Robin’s parents they had the right to decide what to do with the funds donated to their son.

“I can’t take Robin to a doctor’s office because we don’t have money. So we have to take a whole day off school to go sit by the clinic to just leave with a packet of Panado. It’s really not fair,” she said.

Samuel Julius, the principal of Eros, told GroundUp that the decision was made by the SGB. “Robin is in grade 11. He will be in grade 12 next year. Then whatever money is still left will go for his school and transport fees for next year. The school doesn’t use a cent of the money because it’s in Robin’s name. I suggested that the family open a trust fund in his name,” he said.

“I’m also waiting for the Department to give some guidance on this because the one question that has come up is: is it legal? If the Department tells us that it’s not legal, then we will have to give the money over. I feel like we do things in the interest of the learners,” he said.

Millicent Merton, spokesperson for the Western Cape Education Department, said that there are “no guidelines for these situations because the law does not envisage that private individuals’ money would be paid into school accounts”.

Merton said the SGB was prepared to transfer all of the money allocated to the learner into a trust fund to be set up by the learner’s parents. But Shereen Adams says setting up a trust fund would involve lawyers which they cannot afford. She says in order to set up the fund, they were told they would need a substantial amount of money to maintain it.