A Manenberg mother’s desperate struggle to save her son

Shereen Adams fought for her son’s life when he was shot during gang violence. Now she’s fighting to keep him at school. 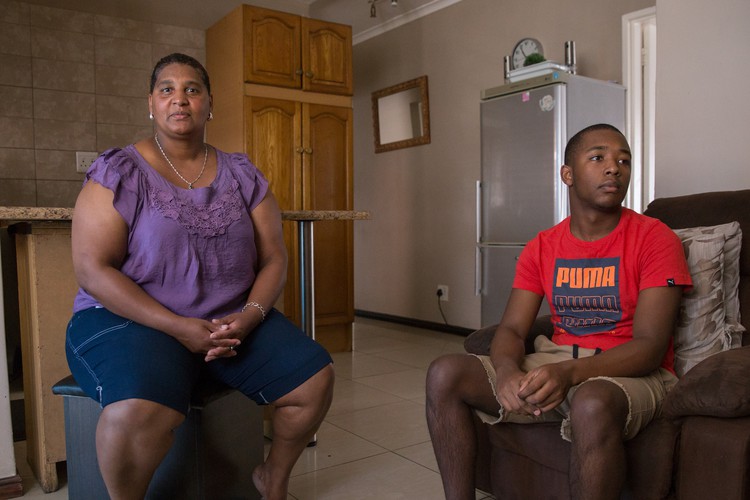 Shereen Adams is struggling to raise the money to pay for her son’s special needs school. Photo: Ashraf Hendricks

In July 2013, Robin Adams was shot in the head just outside his home on the outskirts of Manenberg — one of Cape Town’s most notorious gang ridden areas. Nearly five years later Robin and his family are still battling to deal with the devastating consequences.

Rival gangs started shooting while Robin and his friends were playing soccer on an open field across the road from his house in Vygieskraal. He was just 13 years old at the time.

GroundUp visited Robin and his mother, Shereen Adams, at their house in Sherwood Park. “Robin has a permanent disability. His chances of having a normal life are gone. He used to play soccer all the time and now he can’t even walk to the shop by himself,” Adams said.

“I feel like I’m different,” Robin said. “Before the accident, I was doing things on my own and playing soccer. Now I can’t.

His mother said she was at home on that day in July 2013 when Robin’s friends ran in to tell her that he had “fainted” and blood was coming out of his nose. “I thought he had low blood pressure or something. We didn’t hear gunshots, so that didn’t even cross my mind,” she said.

A neighbour rushed Adams and her son to GF Jooste hospital. It was there that doctors discovered Robin had been shot in the head and was likely to be brain dead within minutes.

“When the doctor showed me his X-rays, they told me they had resuscitated him and his eye was out of its socket. They said the bullet was in his brain and that he would be brain dead soon.

“They took me to a room and said, ‘Please Mrs Adams, your son’s body is still warm. If you donate Robin’s organs now, it can save another child’s life’. I asked them, but aren’t you going to try and save my child’s life? I believed that the Lord can do miracles,” she said.

Adams said she had waited for her husband and their pastor to arrive at the hospital and they had insisted that Robin be transferred to Groote Schuur Hospital for further treatment. There, he was operated on immediately.

Alaric Jacobs, spokesperson for Groote Schuur Hospital, said that Robin’s injury was “extremely serious.” Jacobs confirmed that Robin had sustained a gunshot wound to the right-side of the lower region of his skull. “The bullet crossed through the base of the skull and was lodged in the left frontal sinus of the skull”.

Jacobs said Groote Schuur treats about 80 patients a month for gunshot wounds of which 10% involve the head.

Robin underwent several operations and spent nearly three months in hospital and another two months at the Western Cape Rehabilitation Centre in Lentegeur, Mitchells Plain. He was fed through a tube, first through his stomach and then through his nose. “This was the part he hated most because he wasn’t used to this thing attached to him,” Adams told GroundUp.

But this was just the start of Robin and his family’s troubles. The family moved from their Vygieskraal home because Robin would constantly get flashbacks. Adams left her job to be at her son’s side and her husband, who was suffering from stress, lost his job soon after the shooting. The couple’s younger daughter, Taryn, was also traumatised because she was with Robin on the field that day, Adams said.

Just six months before he was shot, Robin had started grade eight at Wynberg High. In order to “give him the benefit of the doubt,” Adams said, his parents had taken him back to the school in February 2014 to start grade eight again.

“He was still walking with a crutch then and had to carry his school bag around. But Robin wasn’t coping and was very unhappy. So we thought it was best to take him to a special needs school,” she said.

They enrolled Robin at Eros — a school in Athlone for learners with special needs — where five months later in June 2014 he started grade eight again. But because the family relies on her husband’s salary, Adams said, they have been struggling to make ends meet and paying Robin’s school fees is hard.

“I just cry when I think of his school fees because it’s a lot of money for us. It’s R417 per month for school and R364 for the transport that fetches and drops him,” she said.

“I used to get R1,500 for his care dependency grant until he turned 18 last year. Now I need to re-apply. The only date they gave me was in March 2018 to see the [state] doctor. After that it will probably be another two or three months before he gets a disability grant.”

Adams said Robin had made progress at school, where he is in grade 11, but suffered yet another traumatic setback in November last year. He was held up at gunpoint during a robbery at the local barber, Adams explained.

“My husband was waiting outside when a couple of guys went into the barber, closed the door and held guns to the heads of the customers and the barbers. They took cellphones and money. My son was traumatised all over again. His father said Robin just crawled out of the barber. That’s how scared he was,” she said.

Adams said Robin “panics every time he hears gunshots” or other loud noises. Unlike many other 18-year-olds, he prefers spending his afternoons indoors because he is scared to leave his house.

“Besides school, he doesn’t have friends his age. If he walks too far he loses his balance so he has to be with someone. I am sick of being silent. I need to speak out for my son. He wasn’t a gangster or even related to one. His life was stolen from him at the age of 13,” she said.

Earlier this month, the Manenberg Safety Forum made a plea over social media for people to assist the Adams family with Robin’s school fees. The forum’s Roegshanda Pascoe, said victims of gang violence needed more support.

“Everybody speaks about the shooting and gives condolences for those who die, but nobody really cares. Robin will need support for the rest of his life. He is just one case. I know of so many other innocent victims also suffering in Manenberg alone,” she said.

Pascoe said that since her plea on Facebook, she had been contacted by a woman offering free physical therapy for Robin and other young victims of shootings in the area.

She believes that in order to quell gang shootings, more police should be deployed to the area.

“The police in Manenberg don’t even have the manpower to close down the area and go into every house. That is what we need. They use those drones for everything else other than keeping our people safe … The area we live in is in a state of hopelessness,” she said.

Like many other victims of gang violence in areas like Manenberg, Robin’s case remains unresolved with no arrests ever made for his shooting.