Commuter was travelling on the roof of overcrowded train 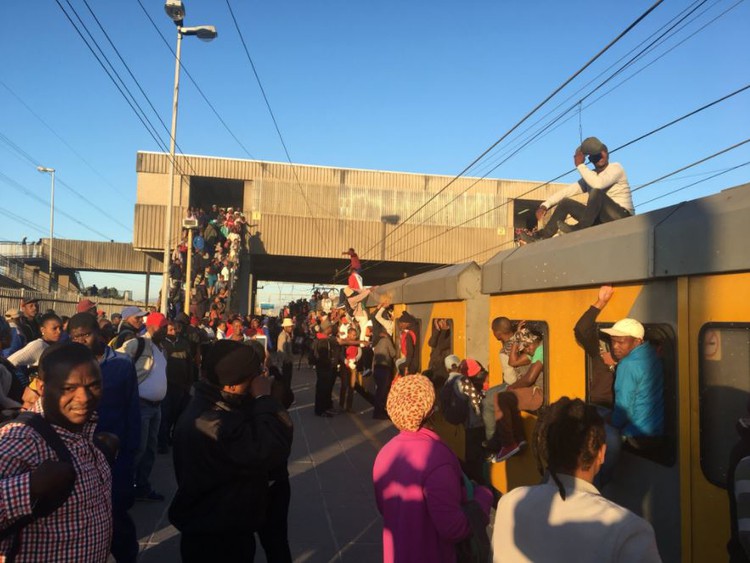 Councillor Brett Herron was travelling on a train from Khayelitsha to Cape Town, when a man got electrocuted on the train just in front of his. Photo from Brett Herron’s Twitter Feed

A commuter was electrocuted on a Metrorail train at Nyanga station on Thursday morning.

Metrorail confirmed the death. Photographs on Facebook show the man lying face down on top of the train.

His name has not been released.

In a statement, Metrorail Western Cape Regional Manager Richard Walker appealed to commuters not to “put their lives at risk by travelling on top of the train, hanging onto the outside of the train or travelling in front of the drivers”.

“It is dangerous and commuters who do so, risk life and limb as this tragedy proved.”

The statement also said trains would be delayed by an hour at least as a result of the death.

According to the Railway Safety Regulator, 495 people died on trains in South Africa in the 2016/17 year, and 2,095 were injured. The Western Cape had the second highest numbers of fatalities and injuries, after Gauteng.

Mayoral Committee Member for Transport and Urban Development Brett Herron had tried to board the train on which the man was electrocuted but it was too crowded. He took a later train. Herron was taking the train from Khayelitsha to Cape Town to “experience for himself the conditions thousands of rail commuters face on a daily basis”.

This is the train we couldn’t get on. Note people on the roof. We’ve caught up with it. It’s been evacuated. Apparently a roof top passenger was electrocuted and died. It is stationary & empty at Nyanga and we are stuck too. #TrainStories Tragic. pic.twitter.com/fmeqOfownb

A video shared by Herron also shows overcrowding on the trains:

This is what happened at Nolungile this morning when I tried to board a train. It is humiliating and degrading of our people. I listened to the most horrific stories of late journeys #TrainStories pic.twitter.com/yjuC3L0kaZ

“I am shocked, pained & angry. I can’t believe what I just witnessed. I was unable to get on the train. People clinging to the roof and hanging on the sides. “ Herron tweeted earlier.

Last month, the Cape Town city council approved a plan presented by Herron for the City to take over the train system in Cape Town.

Herron tweeted that it took nearly three hours for his train to arrive at Cape Town train station. “I am horrified & angry at how cruel this is. We must act now,” he said.

CORRECTION: This article was corrected to reflect the fact that Brett Herron was unable to board the train on which the man was electrocuted because it was too crowded.