Delay blamed on dispute with contractor 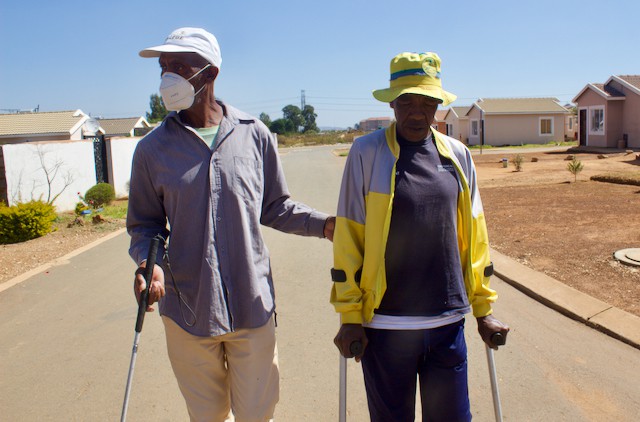 George Msimanga and Jerry Nkambule, both members of Khanyisa Disability Organisation in Nellmapius Extension 22, say the lack of electricity is especially hard for the elderly and for people living with chronic illness. Photo: Mosima Rafapa

More than 1,300 Mamelodi residents in Nellmapius Extension 22, who received RDP houses in 2016, still have no electricity. The project consisted of low-cost housing, 97 units for military veterans, and 550 rental apartments.

The meeting comes after two days of protest action, with residents blocking Solomon Mahlangu Drive from the early hours of Saturday until Monday evening.

Traffic was stopped and funeral goers had to use alternative routes to access Hatherley cemetery.

Community representative Charmaine Sebola said, “We were not proud to turn back funeral cars transporting the deceased. That is not ubuntu.”

But, she said, “Over the years, we were sent from pillar to post. We have submitted memorandums of grievances to the ward councillor and many stakeholders in government. Only when we have a protest action, we’d receive letters saying we would soon see a project starting.”

Last week Tuesday, residents hand delivered a list of grievances to the acting Regional Executive Director Sello Chipu, the ward councillor, and by email to officials from Gauteng Department of Human Settlements, as well as the office of the mayor.

But by Friday, they said they had still not received any response, sparking the protests.

On Monday, Member of Gauteng Provincial Legislature Paul Malema, Ward 15 Councillor Joel Masilela (ANC) and officials from the City told the protesters to be patient until July, and called the Tuesday meeting.

Community representative Petro Motshweneng said, “We have been told that our area would be electrified, that it shouldn’t be a struggle because we are three kilometres away from the substation, but nothing has happened. We just want electricity.”

Councillor Masilela said that contractual disputes between the province and the service provider delayed the electrification. He said the city is trying to fix the problem but “the only thing that is challenging is for the legal department of the province to conclude matters with the previous contractor”.

Meanwhile the spokesperson for the province confirmed that the project had been handed over to the City, but the City spokesperson was unaware of this.