“Two weeks before my husband gets paid, we have no food in the house.” 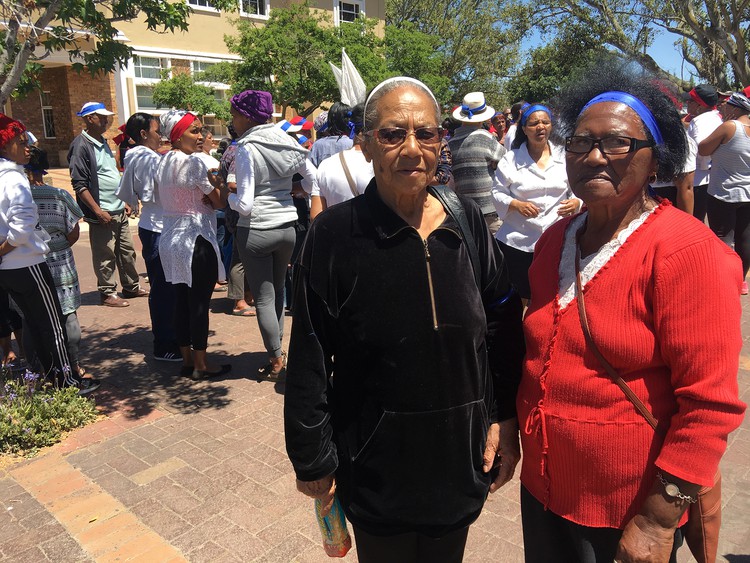 Upset about high utility bills, Wesbank residents in Malmesbury took to the streets on Wednesday. Most of them were women. Some pushed babies in prams. They marched to the Swartland municipal office.

They were also protesting against poor state services.

They carried placards reading “Fight for your right” and “We are not f***dup”. The residents, some of them pensioners, walked for one hour and 20 minutes from 9am, arriving at the municipal offices at 10:20am.

The march to the municipal offices was heavily monitored by police with seven vans, and one nyala closely following the group of fewer than 100 people.

“We are protesting against high water and electricity bills. Municipal officials don’t come to read our water meters but send us a municipal water bill of R2,500 for an RDP house and R4,000 for a normal house,” said Margeree Vermeulen, 34, a mother of two.

Vermeulen says for the past eight months she has been charged R2,600 for water yet her husband is at work during the day and her children are at school. She is a stay-at-home wife, she said. “It is very difficult … Two weeks before my husband gets paid, we have no food in the house. We literally struggle. There is nothing in the house and we must pay high water bills every month.”

Pensioner, Sophia Julies, 71, is a widow. She lives alone in a municipal flat. She says she joined the march because she is upset with the municipality as it disconnected her electricity power supply when she could not pay it.

She depends on her state pension grant of R1,700 a month to survive.

60-year-old Janette Oerson protested because her water bill for November is R3,876.25. “If you come at the municipal offices, the officials don’t listen to you … they just say f*** off to hell. What irritates us most in Malmesbury is that we are treated like we are still in apartheid.”

Ann Lategan, 75, has been applying to the municipality to subsidise her rent in the municipal flat she rents but her efforts have so far been fruitless. This prompted her to join the march. She says she spends R800 for rent including water and pays R500 separately for electricity.

A memorandum listed a range of grievances, including accusations that municipal officials and ward councillors failed to discharge their duties fully, and that municipal by-laws negatively affect “our community”.

The leader of the march, Amber Booysen, and three other community leaders handed over the memo to Mayor Tjimen Van Essen who was accompanied by his deputy, Maude Goliath, and the municipal manager, Joggie Scholtz. Van Essen signed the memo then walked away without addressing the protesters and also refused to take questions from the media.

The municipality’s corporate services director, Madelaine Terblanche, replying to GroundUp via email, said that the mayor would respond in two to three weeks.