Making a little money from filling in potholes 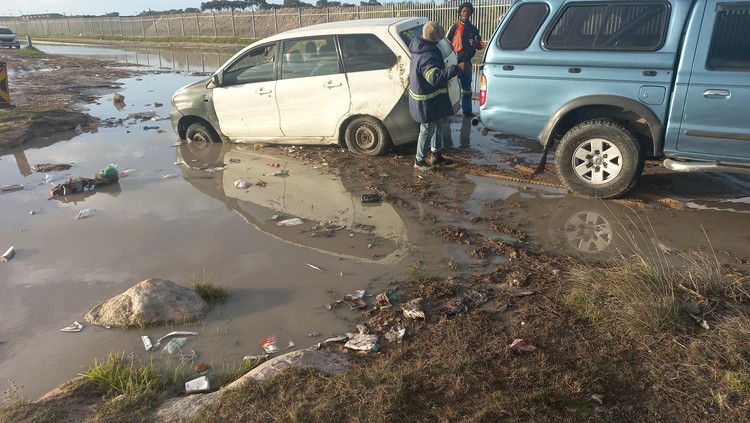 Simphiwe Mazwi and Xolani Pita organising a van to pull a car out of a pothole in Philippi. Photo: Siphokazi Mnyobe

What Simphiwe Mazwi from Philippi East started as a way of killing time - filling in potholes - has turned into a full-time project from which he and two others make a little money.

With no success in finding employment Mazwi and his friends started to fix potholes and public drains in the township. In return, motorists give them money.

Mazwi was employed as a chef at a hotel before he was retrenched in 2020 during the hard lockdown. He started a project called “Helping Hands” trying to find solutions to problems which have not been fixed by the City of Cape Town.

Mazwi, whose dream is to be employed by the City of Cape Town, recruited two other people who were also struggling to find employment. Every morning they gather rocks and dig for sand. In the afternoon they fix potholes and collect small sums of money from motorists, mostly taxi drivers.

“This has now become my full time job. It is how I support my family. The money I get from taxi drivers is not much but at least I’m able to share it with my friends and buy electricity,” said Mazwi.

Ward councillor Mboniswa Chitha said their work was a problem because Mazwi and his team filled in the potholes, so that the municipality could not find them to fix them properly. “When the municipality comes to access the roads, they report that the roads are still in good condition.”

Rob Quintas, Mayoral Committee Member for Urban Mobility, said about R440,000 had been spent by the Road Infrastructure Management department fixing potholes in the Philippi area in 2020-21. “This was over and above the road resurfacing done in the 2020-21 financial year valued at approximately R8.3 million – thus, for 2020-21 alone, almost R9-million was spent in this area on road and stormwater repair work.”

“The local Roads Depot also does pothole repairs on an ongoing basis, as and when necessary.”

“We understand that residents are frustrated and trying to help, however, filling holes with inferior material or rocks could cause damage to vehicles, accidents and possibly cause more damage,” Quintas said. He said if the correct material and methods were not used the pothole would form again. 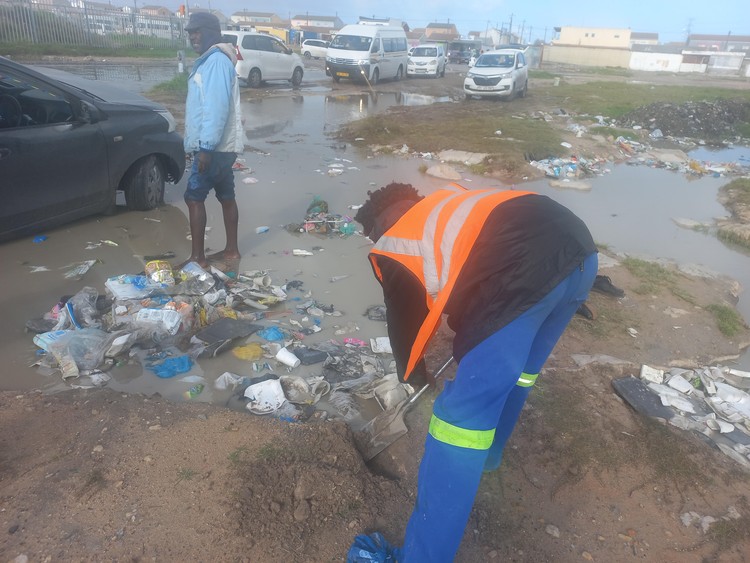 Xolani Pita digs up sand to fill in a hole where a car got stuck. Photo: Siphokazi Mnyobe

Xolani Pita, one of Mazwi’s colleagues, says the pothole work has given him a new focus. “I was ready to end my life, and stop the misery. I still wish to be employed by the City because what we get from motorists now is little. I am happy because I know my community needs me,” says Pita.

He says he tried to register for the Expanded Public Works Programme last year but when he arrived at the City of Cape Town offices he found a long queue of unemployed people and saw no point in waiting.

Masithembe Yayasi, co-owner of Akacia car wash, which is in a street full of potholes, said the potholes were filled with sewage water and in spite of Mazwi’s efforts clients complained that their cars were being damaged.