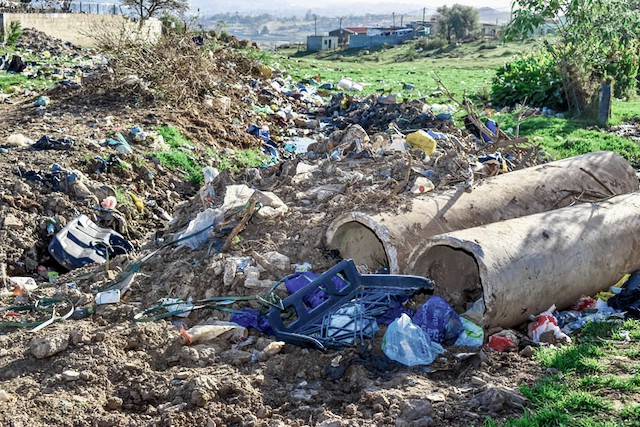 The Eastern Cape High Court ordered the Makana Municipality on 9 September to clean up seven dumpsites, such as this one, within 14 days. It has only cleaned up three. Photo: Loyiso Dyongman

The ruling came after the municipality was taken to court by residents in Ezihagwini Extension 6 and Mary Waters High School last year.

Legal Resources Centre (LRC) attorney Cameron McConnachie said, “Only three dumpsites have received any attention, and even they have not been completely cleared. We have held meetings with municipal officials where we highlighted that there already was non-compliance with the court order.

“We have not taken another court action and have been negotiating with the municipality to comply with the court order.”

Meanwhile, residents of Phumlani location and Fingo Village complain that Makana Municipality has ignored their reports of sewage streaming right past their yards and rubbish piling up.

Luthando Mpofu, from Phumlani, said, “I have lost count of how many times I have been reporting this to the municipality, but it is years. Last year, I even reported this to the mayor [Mzukisi Mpahlwa]. I had a chat with him complaining of the situation … I told him of my disappointment of how the municipality had reacted to this matter. He promised to come back to me… This is another year and he has not fulfilled that promise.”

“It is even worse now as we are approaching summer. This is going to give us an unbearable stench,” said Mpofu.

Council Speaker Yandiswa Vara said the municipality will attend to the problem. “We went there and saw the problem and are going to attend to it. We have informed people in that area that we are going to fix that problem.”