Archbishop: 2020 to be the year of the orange jumpsuit 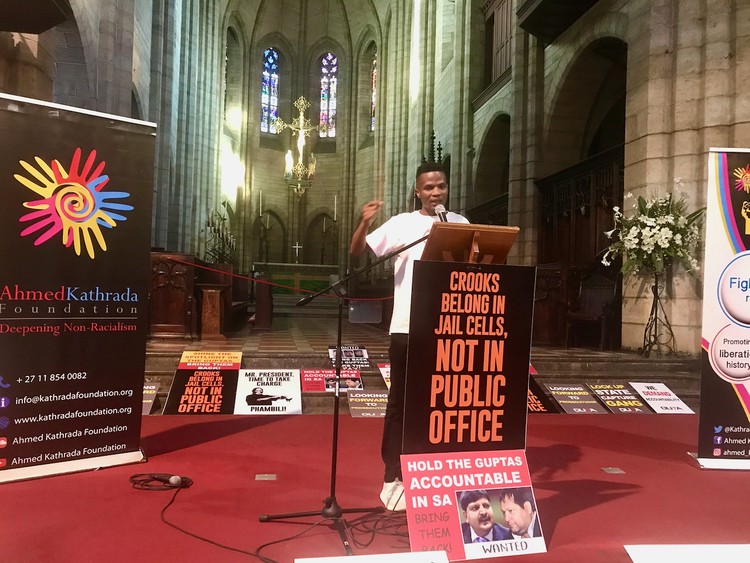 Hundreds gathered inside St George’s Cathedral Cape Town on the eve of the State of the Nation Address (SONA), Wednesday night, for a rally under the banner: “State capture culprits must be jailed”.

Organised by the Ahmed Kathrada Foundation, civil society organisations rallied behind the call for those implicated in state capture to be prosecuted.

Reclaim the City, the Social Justice Coalition (SJC), the Organisation Undoing Tax Abuse (OUTA), MOMS Move for Justice, and Muslim Judicial Council were among the organisations present. Posters read: “We will not allow Gupta Eskom deals to take our lights”, “Mr President time to take charge – Phambili!”, and “Crooks belong in jail, not in public office”.

Reverend Michael Weeder read a speech on behalf of Archbishop Thabo Makgoba. The letter reiterated a call Makgoba made at Christmas that 2020 be “the year of the orange jumpsuit” for those implicated in state capture.

“Tomorrow the president must draw a line in the sand and make it clear that there will be consequences for those in politics, for those in government, for those in the private sector and for anyone else in South Africa who has corrupted the country and stolen from the poor …

“Ensuring that the corrupt go to jail is not being vindictive. Their greed has driven the country to the brink of disaster, and they must pay the price if the law is to be the basis of the healthy and sustainable development of our nation,” Makgoba wrote.

He urged the nation to give the National Prosecuting Authority the space to do its job properly: “Rushed, botched prosecutions followed by widespread acquittals would be a disaster, sending the wrong signals to the corrupt and plunging the country into despair.”

Second to speak was Moulana Abdul Khaliq of the Muslim Judicial Council. “We are ready to take to the streets. How are we going to rescue our country from crime when we have criminals in positions of authority? The time of talk is over; now is the time to implement the law and bring these corrupt leaders to book. Islam stands for justice, honesty and truthfulness,” he said.

SJC General Secretary Axolile Notywala said his desire is to see poor people who are languishing in jail for petty crimes released for rehabilitation and exchange their overalls with “these crooks in our Parliament and government offices who are stealing billions of rands but have never set foot in the jail or court of law”.

“The dignity of the poor and the working class residents of our country is trampled on and there is a direct connection to the money that disappears that would feed and provide the most basic needs,” he said.

“Where is the justice for the real victims of state capture – the children who have to continue using dangerous and undignified pit latrines at school, while school infrastructure budgets have been cut; women who continue suffering because there are not enough resources to effectively deal with gender-based violence; the working poor, who have to ride unsafe passenger trains because of PRASA’s loss of billions due to state capture over the last decade?”

“We have seen the havoc that state capture has wreaked at a national level, and it is with increasing alarm that we watch it replicated at provincial and municipal levels of government. It is a matter of time before many municipalities collapse under the strain of looting and poor management,” the letter said.