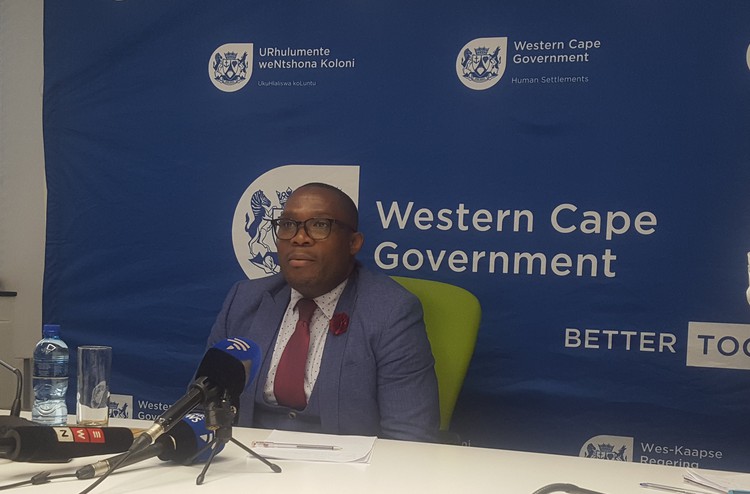 Bonginkosi Madikizela, Western Cape MEC for Human Settlements, said it is important for people to realise that government will not be able to house everyone.

Madikizela was speaking at a media briefing at his offices in Wale Street on Thursday. He addressed the ongoing land occupations across the province. According to Madikizela, his department had recorded 87 protest actions pertaining to land since March.

“What we have seen so far, my judgement is that this is just the tip of the iceberg. These intersections will escalate and we need to be proactive and deal with them swiftly,” said Madikizela.

He said the department could not prioritise land occupiers over those who have been registered on the Western Cape Housing Demand Database for many years. Prioritising certain projects due to protest action would mean that other existing and planned projects are delayed as a result.

“What should inform a decision to start a housing project is that people of that particular area are a priority, not just because they qualify. To qualify for a house is one thing, but in that pool of people who qualify, you must also understand that there are those who deserve to be prioritised because they’ve been waiting for 20 or 25 years,” said Madikizela.

According to the provincial Department of Human Settlements, the housing backlog within the province is in excess of 575,000, and the department can only deliver approximately 18,000 houses per year.

“We have availed 16 pieces of land constituting 133 hectares with a potential total yield of 9,951 housing opportunities. Any deviation or response to illegal land invasions will certainly hamper delivery of these projects, meant to serve the people of this province,” said Madikizela.

Housing protests and land occupations have spiked across Cape Town this year. According to a statement released by the City in May, “the Anti-Land Invasion Unit removes, on average, 15,000 illegal structures” per year. “However, in the first four months of 2018 that figure is standing at over 26,000.”