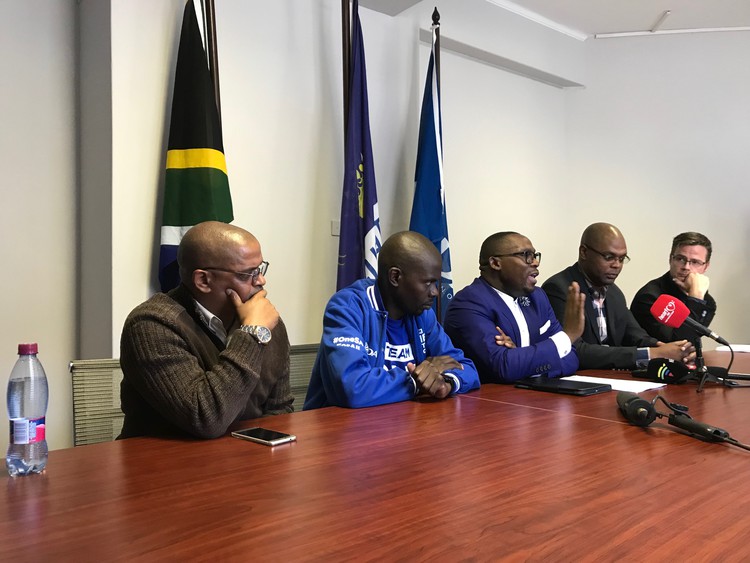 On Thursday DA Western Cape Provincial Leader Bonginkosi Madikizela held a press briefing to clarify concerns over the delay in a social housing project in Salt River. Madikizela said the project has not been blocked; it has merely been put on hold due to several concerns raised by the DA caucus.

Members of housing activist groups Reclaim the City and Ndifuna Ukwazi stood outside the Western Cape Provincial Head Office after they were barred from entering. Their chants and songs could be heard inside the conference room. They were protesting against what they believe is the DA’s lack of action in providing state subsidised affordable housing near the city centre.

The meeting began with Madikizela’s appeal to “set the record straight.” He disputed accusations which called the DA “racist” for delaying the project.

Madikizela blamed Brett Herron, the former Mayoral Committee Member for Urban Development - who was a loud advocate for state subsidised housing near the city centre - not only for the Salt River site disposal delay, but for past instances in which the City failed to carry out its social housing agenda. “We started the Foreshore development,” he said. “Now you know very well what stopped that development is the forensic investigation against Brett,” said Madikizela.

He told the press that the DA is not at fault for inner-city social housing halts. “It’s the people who have left this party… [that have] done the citizens of the city a huge disservice.”

Madikizela defended the City’s social housing projects that are underway even though none in the inner-city have come to fruition. “If you look at our entire pipeline, it clearly indicates the commitment of this government [to social housing].”

DA metro chairperson Grant Twigg blamed Herron for making the future of the Salt River development even more uncertain. “I would like to say at the next council meeting we would have all the information, but the person who was supposed to give it is gone,” he said.

Ward Councillor for Salt River Dave Bryant also denied that the DA is divided about providing affordable housing to low-income Capetonians. “I haven’t found a single councillor in the DA caucus who has ever stood up and said they are opposed to well-located affordable housing in the inner city.”

“The disposal… was actually supposed to come to our full council in March, but it came to us in October,” he said.

See also: Why did the City of Cape Town delay social housing in Salt River?

Hendricks told GroundUp, “The Salt River Market site should’ve been the first site to have been developed for affordable housing.”

“As a person living in Woodstock, Salt River, and being a part of the greater movement of the people, I feel that this project is long overdue,” she said.

In the briefing, Bryant admitted, “Many of these projects have unfortunately taken far too long.”

But the DA is putting the blame on the alleged mistakes made by former councillors. Madikizela said, “It is true… very little has been done in terms of inner-city development.”

He said development takes time. “These developments are at various stages. Many people would know that it doesn’t take a year or two to build houses.”

Both Herron and Communicare have disputed the reasons given by the DA for the delay of the Salt River project. Herron said, “That project has a long history, it’s taken far too long to get to this point. And at the point where the DA could have demonstrated to the country that it is committed to what it said in its manifesto and its policies, it chose to send it back.” (Read more about it here.)

“It’s disappointing that in Cape Town, still, the apartheid spatial legacy is being perpetuated by this political party,” said one protester after the press conference.

“We don’t want to be displaced any longer,” said Hendricks.