Lubabalo Kondlo is the world draughts champion, but he is struggling to make ends meet 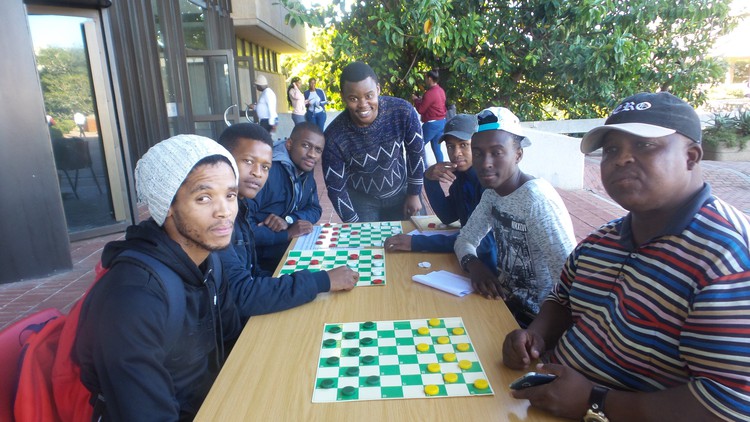 Lubabalo Kondlo is the world champion at the game of draughts. He is on a mission to develop and spread the game in South Africa. He spends much of his time teaching the game to university students and township children.

Kondlo, who hails from New Brighton in Port Elizabeth, became the World Checkers and Draughts Federation (WCDF) champion in 2018. He defeated then world champion, Italian born Michele Borghetti, in the United States. Kondlo won 25-15 (5 victories, 15 draws, 0 defeats) in the Go-As-You-Please variation of the game.

Kondlo is also a top-class player at the popular 3-move version of the game, having lost to Borghetti in this version in a world title match in 2015.

Kondlo teaches at two primary schools in New Brighton. “Draughts is good for the development of kids’ minds and it helps them solve problems in a critical and peaceful manner,” he says.

But it’s an uphill battle popularising draughts. “When sportspeople like Caster Semenya win world titles, they are welcomed at OR Tambo International Airport by the Minister of Sport. But no one has ever welcomed me.”

Kondlo is trying to convince tertiary institutions to introduce draughts as an extra-mural activity. He has teamed up with a group of Nelson Mandela University (NMU) students to whom he teaches the game, including Siphamandla Matiwane, who is studying education. They are forming the Madibaz Draughts Club at NMU.

He started playing the game, with boys of his age, when he was seven years old in New Brighton. At 14 he joined Vulindlela Draughts Club under the mentorship of Jimboy Mqotsi and the late Lulama Gwashu whom he describes as proficient players. Kondlo is still a member of the Vulindlela club.

When his talent was discovered as a teenager, he was thrilled. He saw a prosperous life ahead. He put a huge effort into draughts hoping that it would change his fortune after growing up in a family that struggled to meet basic needs.

He is the first and still only draughts (or checkers, the other popular name for the game) grandmaster on the continent, and the first world champion from Africa. He has won several major tournaments over the last decade and-a-half.

In 2007 he won the US Draughts Open in Las Vegas. He then won a tournament in Las Vegas which earned him the right to play against the world champion at the time, Ronald Suki King of Barbados. The match took place in Ohio USA. Kondlo narrowly lost by one game. The story of the match is told in a documentary called King Me.

Life hasn’t been easy for Kondlo. “I am a very poor world champion. I grew up under the care of my mother’s family who were supportive of me. We lived in an old house that originally housed horses. It was worse than a shack in an informal settlement,” he says.

“Being a world champion has not made life any better for me. I am even struggling to raise my three children.” He doesn’t have a job and spends much of his time teaching draughts to the New Brighton primary schools that he volunteers at.

“It means a lot to me and to Africa,” he says about his world title. “Our government should put draughts on an equal par with other sporting codes. They should also fund it because I am doing all this on my own. At times I find it very difficult to raise airfares to participate in overseas tournaments.”

Government support for him to compete overseas has been intermittent. “Yes I approached the government many times. Sometimes I would get assistance but mostly I footed the bill myself.”

“It pains me that despite being the first world draughts champion on the African continent, I’m still struggling to be recognised. I am not even known here in South Africa,” he says.

But he paid tribute to Alan Millhone, who as president of the American Checker Federation invited him in 2007 to play in the USA. This trip opened the doors for his international career.

Kondlo is determined to make sure that future South African draughts experts get an easier time than he has had. Draughts players should form a national organisation and approach the government as a united force, he says.