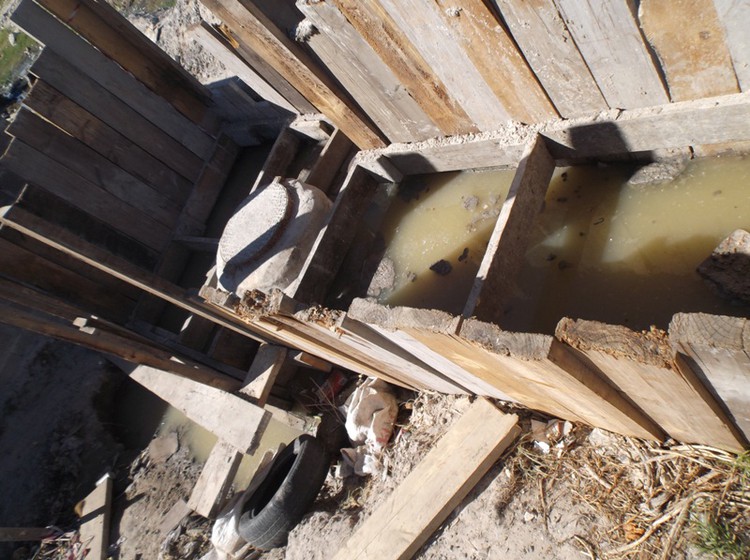 Residents of Lower Crossroads say a foul smell from the drains is keeping them indoors. Photo: Buziwe Nocuze

“We are forced to stay indoors. We cannot open our doors and windows because the smell is too much,” says Lusanda Mbali who lives in Lower Crossroads near Philippi.

Mbali says the smell of human waste has forced residents to become prisoners in their own homes. He says toilets in the area are often blocked after a main pipe in the drain broke in December last year.

“People have been coming here to fix it but instead they are making things worse because before they came it was not a mess like it is now,” she says. “Instead of breathing fresh air we are forced to breathe human waste and the smell comes inside even if you close all the doors or windows”, she says.

Another resident, Busisiwe Singaphi, says they have seen city officials fixing the drain, but the bad smell has not gone away.

Another resident told GroundUp that the stench became “unbearable” in the afternoons and early hours of the morning.”When we come back from work in the afternoon the situation gets worse. And when we wake up in the morning, this is not healthy,” says the resident.

The mayoral committee member for the area, Eddie Andrew, said the City of Cape Town is aware of the situation.

Andrew says that the area is “experiencing frequent sewer overflows” as a result of residents disposing items such as rags, general litter and cooking oil and fats into the sewerage system.

“Investigations are underway to try and improve conditions, but the City will not be able to do this alone. The City will continue to clear blockages,” he says.

Andrew urged residents not to throw litter or to dispose of cooking oils and fats in drains.