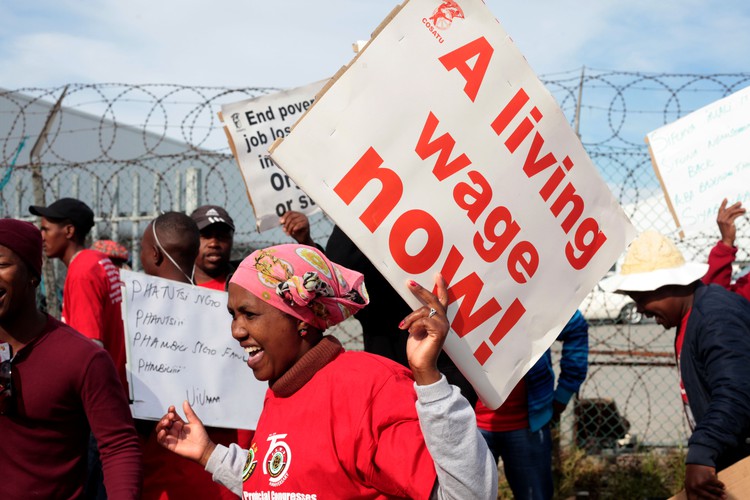 Wage strike in Philippi in May 2016. Archive photo: Masixole Feni

Gilad Isaacs is an economist and lecturer at the School of Economics and Business Science at Wits University. He is also co-director of the Institute for Economic Justice. Isaacs has published research into the socioeconomic impact of a national minimum wage. GroundUp interviewed Isaacs about South Africa’s unemployment problem and what can be done to address it.

GroundUp: How do you think South Africa can reduce unemployment?

Gilad Isaacs: South Africa needs to fundamentally alter the structure of its economy and its current growth path in order to support the expansion of the kind of employment that can support workers’ needs.

GroundUp: Can you give some examples of South Africa’s strategic advantages?

Gilad Isaacs: So let’s take the clothing and textiles sector. We are going to be unable to compete with the kinds of ultra-low wage levels in countries like Indonesia and Cambodia. But we have the advantage of being the closest manufacturers to the African continents’ largest retailers, as one example. So we have a geographical advantage. This means improving production so that our companies can offer turnaround times that others can’t.

The same could be said about agricultural inputs for supermarket chains that operate across the continent, in that case poor infrastructure and other trade barriers are the problem.

Let’s choose a different sector; South Africa has 80% of the worlds’ platinum and we also have an abundance of wind. One of the ways wind energy can be stored most effectively for later use is in something called a hydrogen fuel cell, and platinum is one of the key ingredients in hydrogen fuel cells. So our industrial policy could support the manufacture of hydrogen fuel cells, thereby also increasing platinum demand.

We need strategies to leverage our natural resources. Taking raw minerals and turning them into actual products has fallen in South Africa, so we’re not growing those sectors. We’re also no longer producing as much mining machinery as we should be.

Those are just a few micro-level examples. South Africa’s industrial policy plans suggest dozens of avenues through which we could leverage the country’s unique advantages to grow sectors where we can compete internationally.

GroundUp: There has been an argument for low-wage, labour-intensive industry to create more jobs in sectors like manufacturing. What is your position on this?

However, it is not feasible for South Africa to try and compete on an ultra low-wage growth path. Wages paid in ultra-low-wage countries, for example in parts of East Asia, are so low that workers in South Africa would be starving, literally. And certainly unable to live a decent life. A race to the bottom is not only undesirable, but I believe impossible.

Even if it is conceptually possible economically, it is not possible politically. South Africa’s political economy; a history of labour exploitation, strong union movements, an alliance between the ruling party and labour, and poor social services, would make an ultra-low-wage growth path simply intolerable to the South African body politic.

So we can pontificate about whether or not that would expand employment — of which I am completely unconvinced — but it’s an almost irrelevant conversation.

I am not saying there isn’t a place for low-wage sectors. You are not going to take sectors like agriculture, domestic work, tourism — sectors which are really important — and make them high-wage sectors overnight. But they certainly can’t go any lower than they are. They should be on an upward trajectory and our economic policy should be aimed at such. Also, for an average worker in a substantial number of manufacturing sub-sectors there is no room for a decrease in their wages.

The conversation which we need to be having is a conversation about expanding employment and generating the type of employment that can sustain workers’ needs and be viable in the South African context.

GroundUp: What can government do better to reduce the burden on workers and work seekers?

If you want to allow for moderately low wages in certain sectors, you can’t do that when people are spending a third or half of their income on transport because of our spatially dysfunctional cities. You can’t do that when even lower-middle income households are having to have private health insurance. You can’t do that in an environment where people can’t afford the basic necessities to ensure that they can follow through with their education, and I’m not talking about university, I’m talking about basic textbooks in schools.

Additionally, we need to expand social grants to the unemployed, either through a guaranteed work scheme or a work-seekers grant.

GroundUp: An industry like the hydrogen fuel cell one you mentioned requires a skilled and educated workforce. How does education fit into the reduction of unemployment?

Gilad Isaacs: Education is an important part of the solution. We need to solve the problems in our TVET colleges so that there’s an expansion of artisan skills. We need to think very carefully about on-the-job training. And I would have no problem with relaxing immigration criteria so that we can import skills too.

Education is crucial but it is not the silver bullet. When people qualify there must be jobs available to absorb them and that requires other policy interventions.

GroundUp: What are some of the main obstacles to job creation that South African industry faces?

Gilad Isaacs: In some sectors the skills do exist but the support offered by government is either insufficient or uncoordinated.

If we take agriculture, which is a very important export sector for South Africa, government support to agriculture from the end of apartheid until now has been slashed. We also have poor infrastructure in parts, for example, in water management systems, as we’ve seen. If you look at our export infrastructure, our ports are not bad but our rail is shocking, there is a hell of a lot that can be improved to facilitate increased agricultural export.

We also have very bad infrastructure in poor areas which excludes them from economic participation. For instance, it is difficult for small scale farming to find a market or feed into an agriculture supply chain — at least for domestic consumption — because there are no tarred roads. We should tar every road in the Eastern Cape. We should support small-scale agriculture in a way that it can support livelihoods.

Education is crucial but it is not the silver bullet, when people qualify there must be jobs available to absorb them.

On a broader level, we need a macroeconomic policy environment that supports job creation. The acceleration of austerity – budget cuts and regressive taxation – will have a very negative impact on demand in the economy and job creation. We need a real stimulus, not a reallocation of existing expenditure.

The current policies operated by the Reserve Bank, which see relatively high interest rates and therefore an increased cost of borrowing for domestic industries, is a retarding factor. Bank lending to the non-financial corporate sector – industries which employ many poorer people – has fallen. The extremely illogical manner that the institutions like the Industrial Development Corporation operate – having to raise their own capital like private banks – means that subsidised credit is not going to appropriate sectors to ensure their expansion.

So there’s a whole series of macro-policy issues.

Then add to that the state of state-owned enterprises. What is the mismanagement of Eskom doing to electricity prices, which is a key input in a whole range of industries?

GroundUp: Professor Vimal Ranchhod recently wrote for GroundUp that he is unaware of any highly developed country that has not gone through a substantial period of manufacturing to reach a level of high development. Can South Africa expect to reduce unemployment and develop substantially without having a substantial goods manufacturing economy making global exports? Isn’t that the direction we should be heading?

Gilad Isaacs: Absolutely, I agree with Vimal. The literature is unequivocal that periods of industrialisation are essential to development. But manufacturing is a heterogeneous field. You can manufacture clothing and textiles at a range of wage levels.

South Africa was a world leader in mining technology and pioneering a range of specialised equipment. Now we import even some very simple machinery.

Also, our economy is not only reliant on raw materials and agriculture, we have an outsized service sector, and in particular a bloated financial sector that is not supporting productive investment in the economy.

GroundUp: You said that the political environment makes an “ultra-low-wage growth path” impossible in South Africa, could you please elaborate on that?

There is absolutely no point in advocating for an economic model that is impossible in a given situation. I think that it’s a distraction from the kinds of policy measures that I’ve elucidated which we really need to be talking about.

So when we talk about the kind of growth path we want, we accept at the outset that we’re not going to be Cambodia. We then move from there to understanding what the obstacles are, what is putting pressure on workers’ wages, and what sort of policy interventions can be made to allow for an economy to grow, and to expand manufacturing and other sub-sectors which can accommodate decent wages.

That has to be the starting point of the conversation.

*Views expressed are not necessarily those of GroundUp.