“Passengers are accosted by criminals on the trains. Our employees are being threatened at gunpoint and assaulted. We can’t continue under these conditions.” 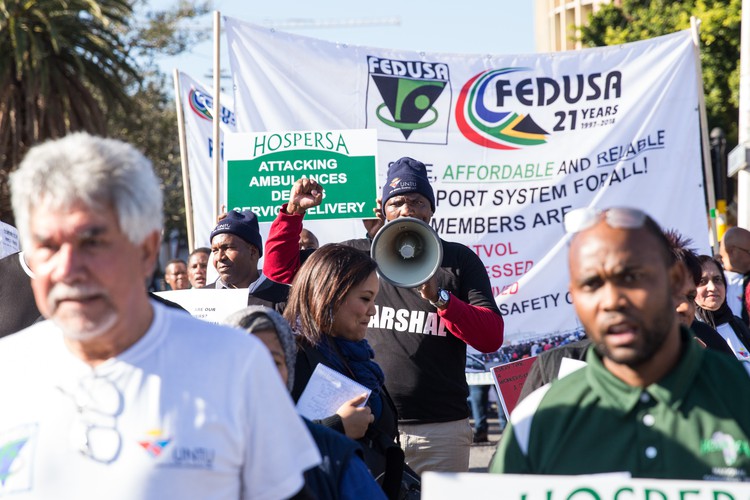 A couple of hundred people marched countrywide to demand a safer train system. About 40 people took part in the Cape Town protest (above). Photo: Ashraf Hendricks

The turnout was low for Friday’s one day strike and countrywide protests called by the United National Transport Union (UNTU) and its umbrella organisation, the Federation of Unions of South Africa (FEDUSA). Workers are demanding a safer train system, both for themselves and passengers.

In particular they have called for the SANDF to be deployed to patrol the railway system. They also want the Passenger Rail Association of South Africa (PRASA) and Transnet to be integrated; better policing of the railways by SAPS; PRASA to comply with the provisions of the Occupational Health and Safety Act; the Railway Safety Regulator (RSR) to be able to exercise its mandate independently from PRASA; and government to find accommodation for the thousands of people living in shacks too close to railway lines.

In Cape Town, about 40 people took part in a march from Keizersgracht Street to Parliament. The Public Servants Association of South Africa and the Health and Other Services Personnel Trade Union of South Africa (HOSPERSA) marched in solidarity. The most popular slogan by the protesters was: “Mr ‘Fix-it’ Mbalula: your 100 days to fix Metrorail are over”.

In Johannesburg about 40 people also marched to the office of the Mayco Member for Transport Nonhlanhla Makhuba. A memorandum, addressed to President Cyril Ramaphosa, called on him to ensure safe and reliable trains.

David Khumalo of FEDUSA said: “The PRASA issue should be considered a national disaster because it affects everyone. The safety conditions at PRASA should be addressed and infrastructure improved. How many more employees should lose their lives before government can intervene?”

In Pretoria a few dozen protesters shouted: “Phansi nePRASA Phansi! [Down with PRASA]” as they marched from Harfield Court to the Union Buildings.

“People are dying on our trains, getting robbed. There’s no windows, no safety at all,” said a PRASA track worker from Mamelodi.

When the protesters reached the Union Buildings there was no representative of the presidency to listen to the demands being read out by one of the workers. Only after about an hour did the Acting Deputy Director General of Rail Transport come out to receive the memorandum of demands.

In Durban, 35 people marched from King Dinuzulu Park to City Hall. UNTU General Manager Steve Harris said the crisis faced by PRASA over the past three years now requires President Cyril Ramaphosa’s intervention. “Passengers are forever late. They’re accosted by criminals on the trains. Our employees are being threatened at gunpoint and assaulted. We can’t continue under these conditions,” he said.