… but it was meant for a brand new sports facility 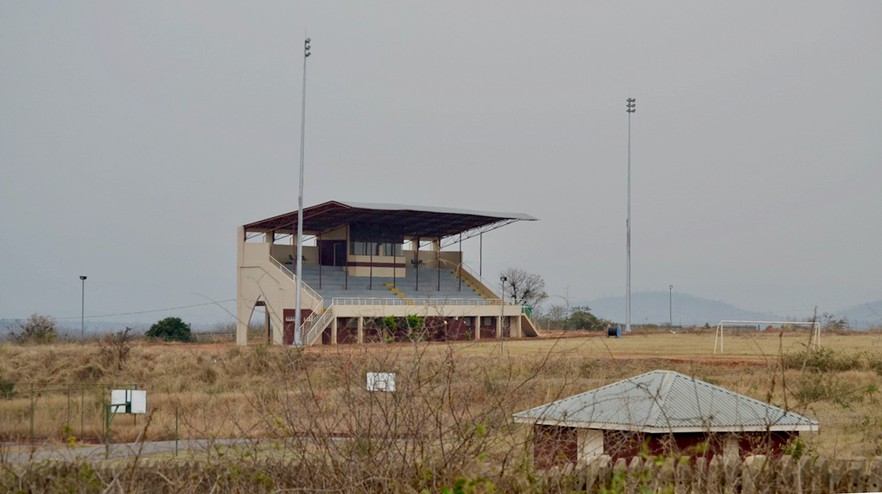 The Mdabula Stadium, supposedly funded by the Lottery in 2018, was constructed by the Thulamela Municipality about 2006. Photo: Limpopo Mirror

An R11.4 million Lottery grant to a non-profit organisation to build a sports facility in Limpopo was used for maintenance and repairs to an existing stadium built several years earlier, leaving close to R11 million unaccounted for.

A months-long investigation has revealed how I Am Made For God’s Glory (IAM4GG), a dormant and non-compliant non-profit organisation registered by a group of young friends in 2012, was used to successfully apply for Lottery funding for the stadium.

The organisation never got off the ground and lay dormant for several years before it was suddenly revived and used to successfully apply for the stadium grant.

After receiving the first tranche of the grant, IAM4GG almost immediately paid an amount of R2 million to a company headed up by a first cousin of National Lotteries Commission (NLC) Chief Operating Officer Phillemon Letwaba.

The investigation by GroundUp and Limpopo Mirror has found that the stadium supposedly funded by the Lottery was in fact built a few years earlier by the Thulamela Municipality using a Government Infrastructure Grant.

And the only work paid for from the Lottery grant appears to have been used to replace several damaged doors, to do some painting and to install some “ineffectual” lights, which a source with knowledge of the project says amounted to “no more than R100,000, if that much”.

Leaked emails also reveal a thwarted attempt to change the names of the directors of the organisation. The names of Lottopreneur lawyer Lesley Ramulifho, Liesl Moses, who works for him, and Themba Mabundza were inserted in Department of Social Development records as office bearers, while three of the original directors were removed. Mabundza, an active director of over 50 companies, is a director of several companies linked to Letwaba.

After receiving a complaint, the Department of Social Development investigated and found that the changes had been made without the correct supporting documents. As a result, the original directors were reinstated in the department’s records.

Lebogang Mokubela, one of the founders of IAM4GG who is still listed as a director, confirmed that he had been approached by the Department of Trade, Industry and Competition (DTIC) investigators a few weeks ago.

“They showed me papers about a Lottery-funded project in Limpopo. I was surprised … I know nothing about any application for Lottery funding or any stadium,” he said. “I have cooperated fully with [DTIC Minister] Patel’s investigators.”

Mokubela said that IAM4GG had been set up by himself and several friends. “We set up the organisation to support a youth programme. We only did two projects, both were self-funded … I have not seen any of these guys [the other office bearers of IAM4GG] for years.”

The other office bearers listed with the Department of Social Development are Thomas Nkuna, Lehlohonolo Khotse, Mpho Maphanga and Nthabiseng Sathekge. Nkuna and Maphanga did not respond to questions sent to them. We were unable to track down Sathekge and Khotse but Nkuna and Maphanga were both asked to forward our questions to them. It is unclear whether they did, as neither responded to the questions.

IAM4GG submitted an application for funding on 7 December 2017 for an infrastructure project in “one of the smallest municipalities that does not have vast opportunities for development”.

IAM4GG originally asked for R15.4 million for the project, which it said would assist athletes from “disadvantaged [areas] … especially rural communities”.

The application was dealt with as so-called proactive funding, which allows the NLC, its board or the DTIC minister to identify a project and then appoint an operator to manage it. How non-profit organisations or non-profit companies are chosen is unclear, especially in light of the red flags IAM4GG should have raised when — and if — the NLC did its due diligence.

The NLC appointed IAM4GG to oversee the project despite the fact that it was non-compliant in terms of the Non-Profit Organisations Act and had not complied with its statutory reporting obligations to the DSD since 2013. The funding application also named three new directors who were not listed as office bearers of IAM4GG in the records of the Department of Social Development’s Non-Profit Organisation Directorate.

And, a copy of the IAM4GG constitution, submitted to Nedbank for FICA purposes was signed by Ramulifho, Moses and Letwaba’s cousin, Karobe Sithole, was dated 9 January 2016. But the constitution submitted to the Department of Social Development when IAM4GG was first registered is dated 25 March 2012.

The funding application submitted by IAM4GG was vague about what was planned. It also made no reference to the research the NLC has repeatedly said precedes any decision involving proactively funded projects.

IAM4GG said its plan was “to provide infrastructure in order to advance sport, recreation and physical activity in communities across the country”. The project was aimed at sports “transformation” and athletes from “disadvantaged … especially our rural communities”. It would create 60 full-time and 40 part-time jobs and benefit more than 16,000 people, according to the application.

On 16 April 2018 NLC COO Phillemon Letwaba, who has been on suspension since late February this year, signed the R11.4 million grant agreement with IAM4GG’s representatives. This document named Lesley Ramulifho as chairperson of the organisation, Liesl Joy Moses (an employee of Ramulifho) as treasurer, and Karabo Sithole (Letwaba’s first cousin) as secretary. But a Nedbank letter confirming the details of IAM4GG’s bank account gives Joseph Tshabalala, another Ramulifho employee, as secretary.

The address provided for the non-profit organisation was the same as Ramulifho’s legal practice in Garsfontein, Pretoria.

Leaked emails reveal that the change of details on the non-profit organisation register was flagged by Social Development officials after a complaint was received. In one of the emails, an official pointed out that details of the office bearers had been amended, without proper documentation being filed.

Four new names were forwarded as replacement for the existing office bearers. Apart from that of Ramulifho, Moses and Sithole, the new names included that of Themba Mabundza.

On 28 June 2018 the Department of Social Development seemingly stopped investigating, describing it as a mere “internal error”.

Hunting for the stadium

On 15 November 2018, Ndivhuho Mafela, the NLC’s spokesperson, issued a statement about Denzhe Primary Care — which is now being investigated by police — and IAM4GG.

It states: “With regard to the I am made 4 God’s Glory (IM4GG) project, work is complete and a progress report has been submitted to the NLC. The Commission is not aware of any challenges on this project and it has been handed over to the local municipality.”

The time frame was extremely suspicious, as barely seven months had elapsed since the first tranche was paid on 26 April 2018 and the announcement that the project was finished. The second tranche of R2.3 million was paid on 6 July 2018.

The NLC was oddly silent about a project of this scale being handed over to a Limpopo municipality. 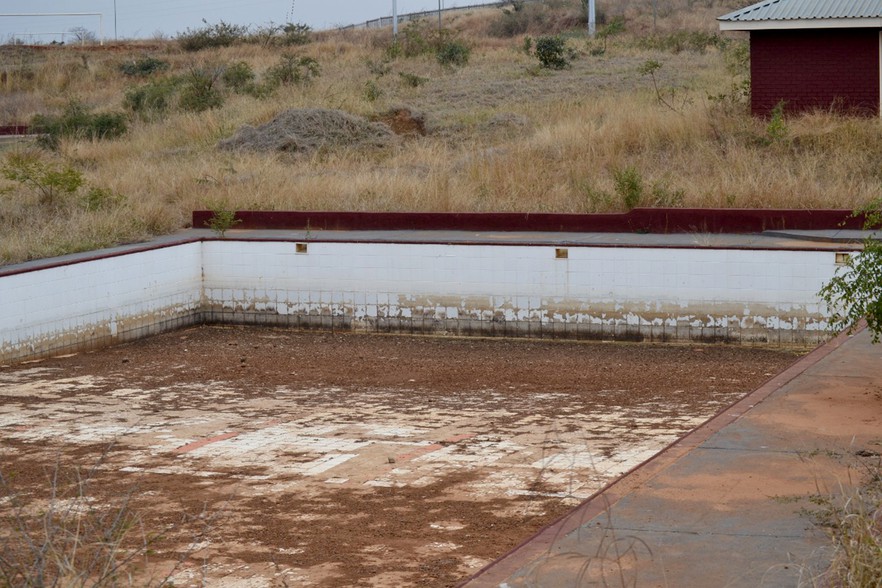 The swimming pool at the stadium does not appear to have seen water for a long time. Photo: Limpopo Mirror

It took many months of searching for the stadium, which we at first believed was in the Mulima area in the Vhembe district. We finally tracked it down after 18 months.

Representatives of several sporting bodies told GroundUp and the Limpopo Mirror that they believed that the project never got off the ground.

We also discovered that the stadium would supposedly include a cricket field that would cost an estimated R6.2 million to build. Despite this, Limpopo Impala Cricket (LIC), Limpopo’s cricket controlling body, and several board members contacted knew nothing about such a facility.

Leaked IAM4GG bank statements revealed that very little of the Lottery grant money was used to build infrastructure. They also gave another clue to the location of the stadium.

On 30 May 2018, the statements list a R2,000 payment with a reference to Thundavhula Sport Complex. There is no such facility, but not far from Mukondeni village is Mdavhula village, which boasts a fairly new stadium, called Mdabula Stadium. An NLC source had also suggested we look at Mdabula.

But it was already built!

A visit to the stadium last month confirmed that this was where the R11.4 million project was based. In 2018, contractors claiming to be working on an NLC project did some work at the stadium.

But the IAM4GG-appointed contractors merely did minor refurbishments at the centre, which entailed replacing some doors, painting some of the buildings and erecting a few ineffective lights, a source said.

The Mdabula Stadium was constructed by the Thulamela Municipality. Construction began on 5 July 2006 after a R4.4 million tender, funded by a Municipal Infrastructure Grant, was awarded to Ben Construction, according to a spokesperson for the municipality.

There were some delays in the project, which the municipality says was the result of a “misunderstanding between the contractor and the municipality”. It was officially handed over on 23 September 2014. In 2016, when municipal boundaries changed following a demarcation process, the stadium was transferred to the Collins Chabane municipality.

A visit to the stadium also revealed no sign of a cricket field. The tennis courts are in a decrepit state, with the surfaces badly eroded. There is also a large swimming pool, which appears to have not seen water for a long time.

A builder with experience in construction, who asked to remain anonymous, estimated the total value of the work done by IAM4GG at the stadium to be less than R100,000.

Lesely Ramulifho did not respond to detailed questions emailed to him.

Responding to questions sent via WhatsApp, Mabundza said: “I do not have any comments for you at this point, especially about a matter which you say is under forensic investigation. I feel like any statement I make to you will be misquoted and misrepresented.”

Ndivhuho Mafela, the NLC’s spokesperson, failed to respond to detailed questions sent to him. NLC Commissioner Thabang Mampane, who was cc’d in the email also didn’t respond.

Connecting the dots
Lesley Ramulifho’s relationship with the NLC dates back to 2015 (and perhaps even before that), when he started doing legal work for the institution. But Ramulifho is not the only one who has connections to the inner circles of the NLC.
Themba Mabundza, another of the IAM4GG office bearers, is connected to Phillemon Letwaba via at least four companies. In the period between 2017 and 2020, Mabundza and Letwaba served as directors of Andzani Investments, The Prestige Hospitality Group, Torrex Mining and PKT Consulting Engineers. Both resigned as directors of some of these companies, but their terms overlapped.
GroundUp also revealed how PKT was a service provider to a library/museum and an old-age home in Kuruman.
Mabundza and Rebotile Malomane (Letwaba’s second wife and the mother of three of his children) are both directors of a Zibsimanzi NPC, which was bought off-the-shelf and received R4.8 million in Lottery funds within months of them being appointed as directors. He is also the director of another shelf non-profit company, Life for Impact in the 21st Century, that received a R10.1 million grant within months of Mabundza’s being appointed as a director.
Another office bearer of IAM4GG, Karabo Sithole, is a first cousin to Phillemon Letwaba. He was listed as an office bearer of Denzhe Primary Care, alongside Ramulifho. He also became a director of a Letwaba-linked company, PKT Consulting Engineers, on 1 March 2017 but resigned just 14 days later. He is an active member of the Letwaba-linked Kaone Wethu, which did construction work on several NLC projects. He previously served as director of Ironbridge Travelling Agency and Events and Redtaq. Phillemon Letwaba’s brother, Thabo, his cousin Karabo Sithole and his wife Keneilwe Constance Maboa, are former directors of Redtaq and Ironbridge.
IAM4GG, Life for Impact and Zibsimanzi are all the subject of an investigation ordered by Minister Ebrahim Patel. A dossier on Denzhe Primary Care, a hijacked non-profit organisation also involving Ramulifho and Moses, has been handed to the police.

Published in partnership with the Limpopo Mirror.