A look at Port Elizabeth’s most closely contested ward

Ward 38’s community lives on the edge of a wasteland 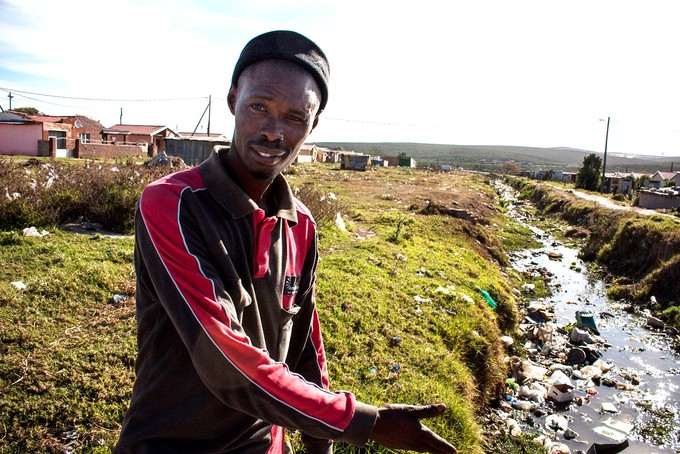 Xolisile Tangana, who lives in one of the shacks visible behind him, says nothing is done about the piles of waste that clog streams and cling to bushes in Ward 38 of the Nelson Mandela Metro. Tangana, who is a card-carrying member of the EFF and unemployed despite an N6 qualification in financial management, believes unemployment is the biggest problem in Kwanoxolo.

At the northern edge of Port Elizabeth, before the stark rows of RDP housing set on waste-strewn land gives way to thorny bush that separates the city from Despatch, is Kwanoxolo, the most tightly contested area in the last municipal elections.

Twenty years ago, Kwanoxolo and its neighbouring suburbs such as Booysen Park, were mostly vacant rolling hills alongside the Chatty River valley. Now, thousands of state built houses cover the hills in uniform blocks between streets beginning to crumble from lack of maintenance: homes for predominantly unemployed black and coloured families.

Clogged with plastic, the river is now choked, and every thornbush covering the expanses of open land on the urban edge is adorned with tattered plastic bags, rubble covering the veld to the extent that it looks as if the suburbs are built on an open landfill.

The rubble and refuse, combined with the sprawl of blocks, the distinct lack of trees and any indication of a business centre or public facilities, give the area a sense of desolation despite it being home to 8,500 people per square kilometre.

A drive through the area, as well as the testimony of EFF ward candidate Thando Thanduxolo and ANC candidate Phumza Matutu, confirmed that Kwanoxolo has no clinic, high school, library, sports facilities or formal shopping area.

As a result, it costs R18 return by taxi to get to the nearest clinic in Kwadezi, says Thanduxolo, an amount few people can afford, especially the elderly surviving on state pension grants who need to get medication regularly.

While there is one primary school in Kwanoxolo, the nearest high school, like the clinic, is across the valley in Kwadezi. With a staggering 70.5% unemployment rate and an average annual household income of R14,600, or just R1,217 per month, few families can afford to pay the R18 return taxi fare for their children to be transported to school. As a result, the vast majority of high school children living in Kwanoxolo walk the three kilometres to school and back, risking being mugged on the way in an area that had 229 reported cases of robbery with aggravating circumstances in 2015, and 264 in 2014.

Should children from Kwanoxolo not get accepted into Lungisa High, which, according to a January report in The Herald newspaper quoting principal Noxolo Tshiki-Nyikana, is overcrowded with up to 45 pupils to a teacher, they would have to attend a school in Zwide, some 6km, or an hour’s walk away.

The Herald reported that Lungisa High, which has merged with neighbouring SEK Maqhayi Senior Secondary, had a 2015 matric pass rate of 33.3%, with SEK Maqhayi achieving just 11.8%, yet lack of transport makes it the high school of choice for Kwanoxolo children.

School children walking back home in the afternoon said ANC politicians visited the school in march and promised that a bus would be organised for them, but so far nothing has happened.

The children said they struggled to get to school on time in winter because they could not set out in the dark lest they get robbed on the way, and shortcuts through the bush were even more dangerous.

“We always need new shoes,” said one school student, pointing at his worn soles, adding that some students dropped out of school because of the lack of transport.

For an area with as much visible housing delivery as Kwanoxolo and surrounds, that a number of people should cite housing as one of the area’s foremost challenges is initially surprising. The dense informal settlements characteristic of the edges of metros such as Cape Town and Johannesburg are not as evident here.

Looks can be deceiving, however. Data from the 2011 census harvested by wazimap indicate that 1,077 (24%) of the 4,490 households in Kwanoxolo live in shacks. This is three times the average for the Eastern Cape, and just under twice the average for the country. These 1,007 shacks are dotted throughout the ward rather than concentrated in one space, so their presence is not as evident as it is in many other areas. While residents indicated many people who live in shacks access electricity from RDP-housed neighbours via an extension cord and are in proximity of a standpipe for water, toilet facilities are non-existent. There were no chemical or mobile toilets to be seen near the existing shacks in Kwanoxolo.

Bearing an EFF membership card, Xolisile Tangana (35), who says he holds his N6 qualification in financial management, pointed out the shack situated on the banks of a heavily polluted stream that he has lived in since he arrived in Kwanoxolo 12 years ago. He said he got electricity from a formally-housed neighbour and used a standpipe for water but had to go to the toilet in the bush, although, “sometimes people in the houses let us use their toilet”.

Both Thanduxolo and Matutu complained about poor construction of the approximately 3,300 houses that have been built in the ward.

“These house were built and demolished and then built again. It is poor quality building because of tenderpreneurs. There are cracks everywhere,” said Thanduxolo, speaking in the yard in front of his aunt’s house where he lives and had set out a small stand from which he and six cadres were blaring music onto the street to attract potential voters.

Matutu, speaking on the edge of a small ANC rally attended by about 400 people who were scrumming for free T-shirts, also said housing was high on the list of priorities in the ward and complained about the poor standard of existing housing. “They are old RDP houses which are leaking,” she said.

Detailed questions sent to the Nelson Mandela Bay acting communications director Kupido Baron received no response despite GroundUp calling him up to make sure he had received the query.

Split between a traditionally DA-voting coloured and traditionally ANC-supporting black residents, the DA-led Ward 38 is the only ward in the metro that had a margin of 10% or less between the two parties in the last elections.

The provincial vote in the national elections of 2014, saw the DA essentially maintaining their ground, getting 49% while the ANC dropped to 44.4%, haemorraging some of their votes to the newly formed EFF who wooed ANC and COPE voters to get 2.5% of the residents to shift their position.

Residents GroundUp spoke to did not seem particularly enamoured with current DA encumbent Sarina Marlow, claiming she was never seen in the ward, neither did she live there. She is not standing for re-election in the ward, replaced by DA candidate Edward Harker.

Unsurprisingly, Matutu believes the ANC will win the ward back from the DA because people are disappointed with Marlow’s lack of delivery. “Even the people in Jacksonville (a coloured area in Ward 38) say the DA councillor didn’t do anything for them,” said Matutu.

However, Thanduxolo says they now have close to 2,000 card carrying EFF members in the ward and the majority of them are former ANC voters. This would indicate an erosion of about 40% of the ANC voter base and if so, the DA could well retain the ward should their voters remain loyal.

Sarina Marlow’s listed cellphone number seemed to have changed or her cellphone was off, and emails received no response. Harker did not respond to messages left on his cellphone.

Joseph Chirume assisted with this article.

Steve Kretzmann is a freelancer who runs WestCapeNews. All photos by Kretzmann/WCN.