The long wait for “madams or bosses”

“Sitting at home will not put food on our tables,” say the men waiting by the side of the road 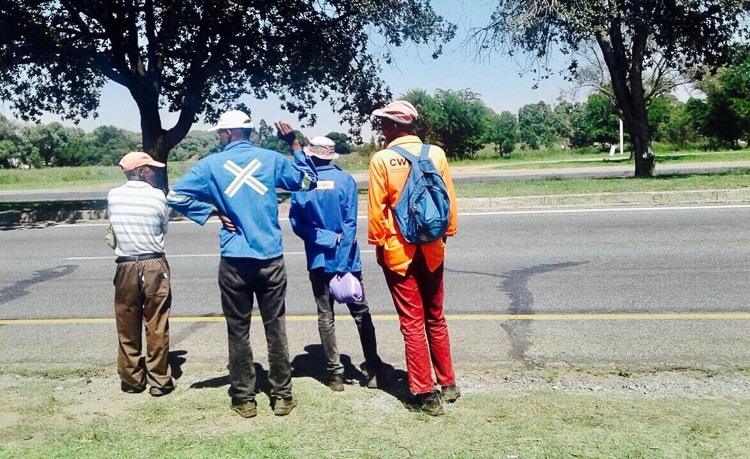 Every day, men without jobs stand at “The Position” by the side of the road in Pretoria hoping for someone to offer them work. Photo: Kimberly Mutandiro

From Monday to Sunday, between ten and 20 men can be seen standing near the corner of South Main Reef Road and the Paul Kruger R51 highway to Pretoria. Some wear overalls, some do not. They are there from as early as 4am, waiting, hoping for someone to pick them up and offer them work. Kimberly Mutandiro talked to some of the men.

There are men waiting by the roadside even on weekends and public holidays. They are on the lookout for anyone who can give them work, any work. They offer gardening, cleaning and painting services, or they are handymen who say they can fix “anything”. Some will work for as little as R50 a day, as long as they can go home with something.

The spot where they wait, nicknamed “The Position”, is situated near an industrial area. In the past, they say, employers would pitch up and fill their vans with workers for different projects. Some would pick up people for domestic work or gardening. There would always be work for the day, and the lucky ones would secure long term employment and never need to return to “The Position”. But no longer.

Thomas Moreku, 59, says he has been coming to The Position for 16 years. The longest he has worked in his life was as a general cleaner from 2000 to 2003.

“I was paid R630 a week for three years, which I can say was very low. But I needed the money, so I hung on. I never got another job. Now, I rely on piece jobs, cutting grass and cleaning … At The Position, sometimes we get jobs to wash dishes for the day and they give us R50 each.”

“I cannot be choosy”

“I never received any special education so I cannot be choosy when it comes to work or the amount of money I get paid. Anything goes. That is how I learnt most of my skills for fixing things and plumbing,” says Moreku.

Originally from Limpopo, he lives in Tsakane. He has two teenage daughters who live with their mother.

“We look out for madams and bosses [employers] who may need a gardener, cleaner, or painter for the day. We take any job offered to us as long as it pays. Even big firms sometimes used to come and look for employees here,” he says.

Of late, though, they don’t get much work, say the men. Some manage to pick up one or two jobs a week, giving them R200 to R300 for the week. Others say they can go for a full week with no work, though they wait as late as 6pm. Some stand a few metres away from the others, hoping to have better luck. Some wait across the road or at the robots.

“l always tell myself that I will not come back here again, when I don’t find work. But after going to other places and not finding anything, I always come back here,” says Sandile Tshabalala, 41. “Standing with other men always motivates me. At least I know I am not the only one struggling to get real work.”

Tshabalala is from KwaZulu-Natal, but he lives in Kwathema. The longest he has ever worked was as a pump operator between 2000 and 2005. Since then, he has only had piece work. He says he is good at plumbing though he has never had training, but he hasn’t been “picked” for plumbing work for a long time.

“I only get gardening work. I go and clean yards in houses and firms, and cut grass. At some point, I even cooked. What can a man do?”

“I struggle to make ends meet. I can’t even afford to marry the mother of my children. I continue coming to The Position.”

“Sitting at home will not put food on our tables,” says Tshabalala.

Sometimes the situation at the spot turns desperate. Some of the men end up asking passing motorists or small change to buy food.

“As long as my children can eat”

“Anything goes as long as my children can eat,” says Nkosinathi Nogilia, 35, who has three children who live with him. Their mother is in the Eastern Cape.

“I have lived on piece jobs all my life,” he says.

Thomas Gradebe, 51, has been coming to The Position for piece work since he was retrenched from a Boksburg job as a driver’s assistant in 1988.

“I don’t have any qualifications,” he says.

Emmanuel Mbali, 50, says he worked in Springs for a month in 2016 and has not had regular work since. “I did metalwork and woodwork in high school. I also have a certificate in fork lifting. But I have relied on piece jobs from The Position for almost ten years.”

“My fiance said if I did not get a straight job she would not marry me. She is now married [to someone else].”

“We have been coming [to The Position] for three years and it is not the same. We hope employers will remember us and bring us work like they used to. But few come by now and they don’t take all of us,” says Patrick Madihlaba, 55, from Tsakane.

“Our place has become almost dry. Where else will we go looking for work?”

Madihlaba is married with two children. “How can a man go back home to his family in the evening empty handed?” he asks.