Covid-19: Patients complain of long clinic queues but officials are trying to fix this

“No patient has been turned away” 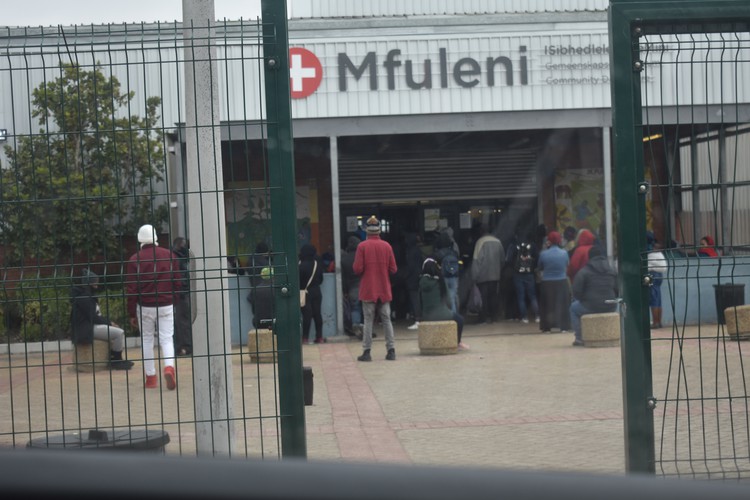 Patients at some public clinics in Cape Town are complaining about waiting in long queues, sometimes in cold and wet conditions.

GroundUp visited two facilities in Mfuleni and Gugulethu where patients are waiting outside for long periods due to Covid-19 regulations. But officials say they are doing their best to manage the situation with limited resources.

At Mfuleni Community Day Centre on Tuesday, dozens of patients were seen huddled around the entrance of the facility to keep out of the rain, many of them not wearing masks. Every few minutes a nurse would come up to the door to collect people’s clinic cards before allowing them inside.

Yonela Sango said she arrived early but expected to be assisted only later in the day day. “I do not understand their way of doing things because it is not working. If it’s too hot or raining we get sick while visiting the clinic. She suggested that the centre put up a tent up with chairs.

Mavusi Gqola, a Community Policing Forum member, said people waiting outside clinics can be targeted by criminals. He said he visited the clinic last week when it was raining and dozens of people, some in wheelchairs, were outside. “I asked the security guard why they were not letting them inside. I threatened to report them and that’s when they allowed people inside.”

Sithembiso Magubane of the provincial health department said the clinic is trying to resolve the long queues outside. This includes employing more pharmacists to make medicine dispensing more efficient. He also said they were increasing home deliveries and setting up alternative collection sites.

During a visit to the facility, a security guard was seen standing at the front gate with a loud hailer, calling out names of patients. One by one, patients stepped forward. Before they entered, their hands were sanitised and their temperature checked.

Outside were four short queues of patients, who were wearing face masks, but standing huddled together.

Emily Mpatani, a New Crossroads resident, said she often goes to KTC to collect her son’s medicines. She says she battled for nearly three weeks to get these at the facility.

“Only after I explained my situation numerous times to the security guards and after arguing with a pharmacist and a nurse, I eventually received my son’s medication. Why can’t we have better services? Why are all these government places that should serve the community all the same?” asked Mpatani.

Speaking anonymously, a senior KTC staff said: “Things have changed now because of the pandemic. Most of the people who complain about waiting are those that do not have appointments. I know that people fall sick suddenly and need to see a doctor, but it becomes difficult to accommodate them when there are people who have appointments.”

The staff member said patients often complain about the process of getting their medicines because they don’t understand the system. “The facility works with a number of non-profit organisations who provide community healthcare workers who go around and deliver medication. A big problem is that you will find that patients give the wrong or outdated address.”

Ndumiso Mzazi from the Movement for Change and Social Justice, an alliance of organisations in and around Gugulethu, said volunteers from the organisation dealt with patient complaints. “Issues that we’ve encountered include complaints that staff do not care especially in the maternity and trauma wards, medication is not being delivered to patients’ homes and there are long queues and waiting periods.”

Spokesperson for the provincial health department Monique Johnstone said hospital management had received complaints from the community. She said most of the issues arose from the need to enforce physical distancing measures.

“No patient has been turned away. We ask that the community please be patient as we cannot allow the facility to be overcrowded in order to limit the risk of Covid-19 spreading. We acknowledge that this can result in a longer wait for our clients,” said Johnstone.

The disparity in resources between the public and private sector shows why state facilities battle compared to private ones. In 2015 (the latest year for which we can find data) the state spent about R3,500 per patient using public clinics. Meanwhile medical scheme expenditure per insured patient — about 16% of the population — was R15,823 (source: SAHR, p. 229).