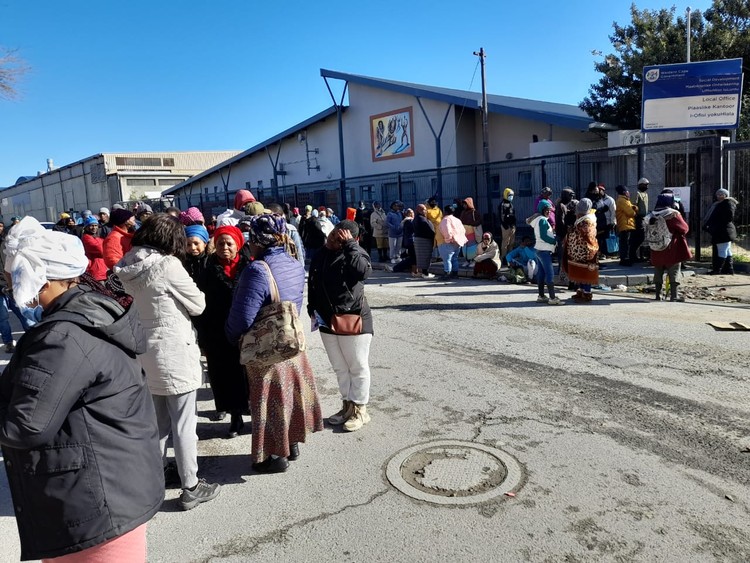 People standing in two different lines outside the Department of Social Development in Khayelitsha waiting to be assisted by SASSA officials. Photos: Nombulelo Damba-Hendrik

Residents of Khayelitsha and surrounding areas protested outside the Department of Social Development on Thursday. They are demanding that the South African Social Security Agency (SASSA) take services back to community halls to alleviate long queues.

Members of the ANCYL and SANCO also attended the protest. The Black Sash’s Amanda Mamase told GroundUp that it was sad that vulnerable people have to sleep outside to get service.

SASSA used to issue appointment cards but the system did not work well because of too many people being given the same appointment dates. Mamase says SASSA is trying an appointment system again.

Mamase says Black Sash, which has been instrumental in the fight for better service from SASSA, plans to meet officials at the agency to find a solution to the problem.

SASSA previously said that the delays at the Khayelitsha office were due to their system being offline during loadshedding periods.

When GroundUp visited the offices last Friday, most people in the line were wrapped in heavy blankets as it was an icy cold morning. There were three lines, two outside the premises and one inside.

Guards at the gate explained that the people inside had slept there and could not be helped the previous day because there was no electricity.

Nomahlubi Nombona has been travelling from her home in Mfuleni to the Social Development offices in Khayelitsha since March to apply for a Disability Grant.

She was among hundreds of people who have resorted to sleeping outside the government office or joining the queue before sunrise in a desperate bid to get help.

“Today I came here to submit the application forms. I was supposed to get another form to take to the state doctor to fill out but there was no electricity [to print the form],” says Nombona.

When she first applied for the grant in March, Nombona says she slept outside the office from 10pm only to be given a date the following morning to return on another day to fill out the forms. She says she had to return a third time because she didn’t have all of the required documents needed for the application.

She fears it may take another three months before her application will be processed. “I have slept here twice before. Today I left my house at 3am to catch the first taxi from Mfuleni to Khayelitsha. We are putting our lives at risk. Unfortunately this is the only option to be serviced. Now that I didn’t get the doctor’s form, I will have to come back again next week,” she says.

Nombono says she has three months to return the doctor’s form. If it is not done within this period, she will have to start the application process again.

“Once I get the form from the doctor, I will sleep here until they assist me. SASSA doesn’t care how many times you come here and are not assisted. When three months end before you submit the form, they no longer accept it,” she said.

Another beneficiary, Gloria Nikani, from BM informal settlement says she has spent several nights outside the office and had to turn home without being assisted. She says by the time the office opens at 7:30am, there are already hundreds of people waiting. By 4pm, officials come out to write down the names of people who were not helped and tell them to return the next day, she says.

Nikani applied for a Disability Grant in February after her grant expired in January. “The application process is very long and frustrating. Imagine waiting for hours on a cold morning just to be told to come back in two months. If you missed your appointment, you will have to make another appointment again,” she says.

“I wish SASSA can take their service back to community halls. Back then the application process used to take less than three months. We are sick, we can’t keep queuing outside. It’s winter and very cold now,” she says

Questions sent to SASSA spokesperson Shivani Wahab on Monday were not answered.

The queues are long and many people will not get serviced on the day.