Living next to a blocked drain for 15 years 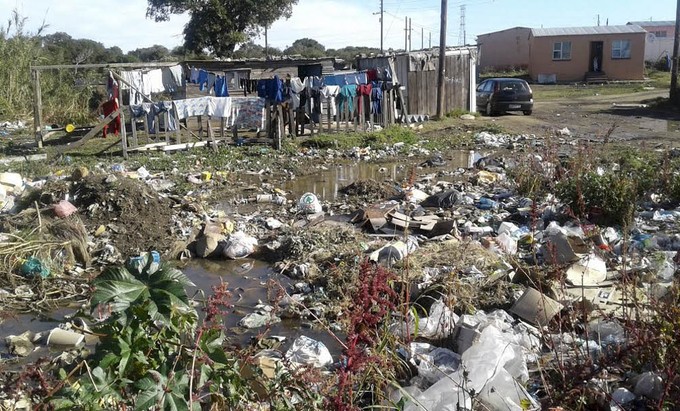 Residents of East Bank in East London say they have lived next to blocked drains since 2001.

Resident Jennifer Mbanga said the blocked drains had been reported to the municipal offices in East London several times but nothing had been done.

When GroundUp visited the informal settlement, Mbanga was doing her washing next to smelly water overflowing from the drain.

She said that her husband was at the municipal offices to report the blocked drain again.

When GroundUp called her a week later, Mbanga said the drain had not been fixed.

“My husband went there last week and again yesterday to report the same problem but still not a single municipal worker has come here,” she said. Her husband Thembinkosi said the drains had been blocked since 2001.

“For the past 15 years I have been in and out of the municipality offices reporting the same matter, thinking that they are going to come and fix it. Last week I was there and yesterday I was there, all they do they keep on feeding me empty promises. When I’m there they promise to send someone to come and fix the drain but they never arrive,” he said.

Another resident, Anna Abrahams, said her children played next to the dirty water.

“There are no playgrounds for our children here so they have no options but to play next to this stinky water,” said Abrahams. She told GroundUp that other residents dumped their garbage there because the area was always dirty.

“If I had a choice I would leave this area and go and live somewhere else, but I can not afford another place,” said the mother of two.

“This is not an area to raise a child. Sometimes they get rashes. I don’t know if it’s because of this dirty place next to our home. Sometimes I lock myself inside the house so at least the smell does not get in the house,” she said.

Resident Zaydene Bennett, whose shack faces the dirty water, said when she moved to East Bank in 2008 the area was already dirty.

She said she often saw people dumping rubbish next to her house. “But how can I tell them not to dump next to my house when the area is always dirty because of the blocked drains?”

Residents said the municipal truck came once a week to collect garbage.

“They only pick up the plastic bags next to the road. Remember, we do not have bins. If the plastic is broken or eaten by dogs, they leave it like that,” said one resident who didn’t want to be named.

Former ward councillor Irene Evelyn Brauns urged residents to be patient. She told GroundUp that the area was not the only one with this problem.

“We are planning to take a harsh stance towards those who break the municipal bylaw by dumping waste on areas not used as dump sites,” he said.

He did not respond to questions about the blocked drains.