Living on a dumpsite since 1992

We’ve been forgotten, say residents of eTipini in East London 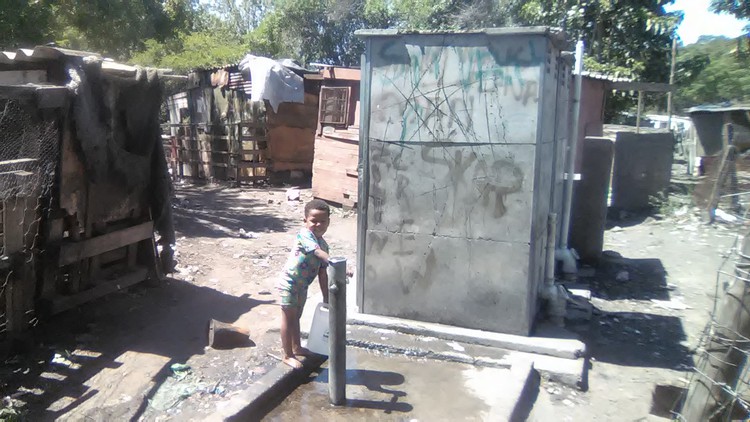 A child fills up a water cannister in eTipini, an informal settlement in a forgotten part of East London. Photo: Chris Gilili

Residents of eTipini in East London say the Buffalo City Metro has long forgotten about their existence. The area, formerly the Stoney Drift dumpsite, has been home to them since 1992, when they removed rubbish, glass and medical waste to create a home for themselves.

People who stay here come from the former Transkei, King Williams Town and other townships in East London.

Today, eTipini is home to over 300 people, according to ward committee member Bonginkosi Gumede. It is listed under ward 9 on the municipality website. The settlement has five communal toilets installed in 2014, but according to resident Peter Greyi not all of them work and there are only three communal taps in the settlement.

The residents use wood from the forest to cook and some have set up illegal electricity connections.

Living conditions are grim and “people use alcohol to escape this reality,” says Gumede.

He says Mayor Xola Phakathi visited the area and made promises to improve the residents’ living conditions or move them to another area, but nothing has happened. “Personally I think the municipality is turning a blind eye to our situation,” he said.

Every day children from eTipini walk the 7km to Duncan Village to school (they have to do the same trip home in the afternoons). “When it rains we just give them black rubbish bags to cover their heads,” says Gumede.

He says ward councillor Mendi Wetsetse has done her best to get the municipality to improve their conditions. “She knocks on every door in the municipality but all the pleas fall on deaf ears.”

Greyi says most residents do not have work. “We collect empty two litre bottles, rusted iron, zinc sheets and sell them in town. At least you get R50 on a good day and have something to eat.”

Some did odd jobs in the East London suburb of Amalinda.

Buffalo City metro communications manager Samkelo Ngwenya said Pakati had promised during a mayoral imbizo last month that the City would provide standpipes within 200m walking distance from each household.