Living on a dam wall

Shack dwellers in Dunoon have occupied the edge of a dam 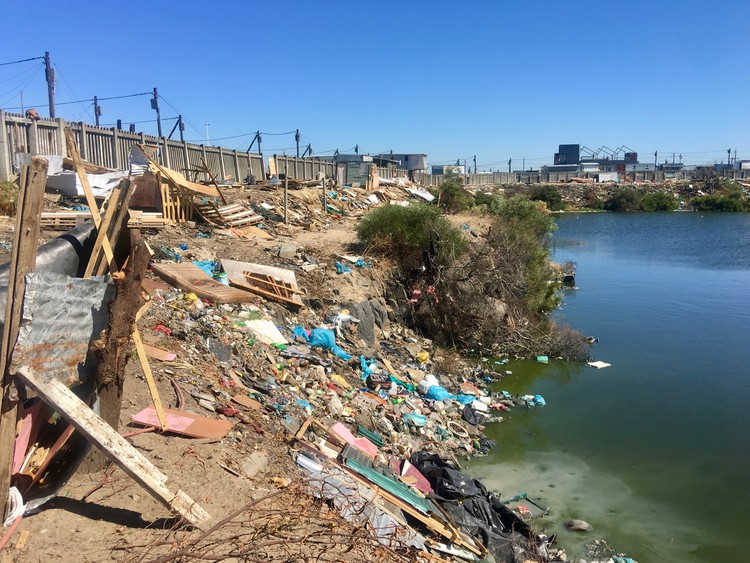 Land on the edge of a dam in Dunoon has been occupied by shack dwellers. Photo: Peter Luhanga

Desperate for rent-free accommodation, residents living in the overcrowded informal settlement of Ekuphumuleni broke down a concrete fence and occupied land on the edge of a dam. Situated behind the Dunoon municipal hall near Milnerton in Cape Town, the air at the site is thick with a rotten egg smell that seems to come from the dam.

Occupiers say the first people to move to the site did so in February last year. A second wave of occupiers followed in June.

By Wednesday some occupiers were rebuilding again.

Before the occupation, the site was an illegal dump. The occupiers pushed piles of garbage into the dam to clear the site and build their homes. “The vacant land was being utilised for illegal dumping. So we decided to clear it and occupy it instead,” said Thetha.

Mateboho Mahashe, 30, who has two children, aged 17 months and seven years, said, “We have been renting shacks outside the fence of the dam in Ekuphumuleni near the N7. We have been paying R800 for rent including electricity. We are unemployed and cannot afford to pay rent, and [we] decided to move inside the dam [area].”

The ALIU demolished her home in January. “They did not give us any notice for eviction or anything,” she said. It cost her and her partner R2,200 to build the shack.

GroundUp saw mattresses floating and household belongings submerged in the grey water of the dam.

Mahashe and Thetha said they built their shacks so that the fronts faced the N7 and the backs faced the dam. “We don’t have many options,” said Thetha. She said the need for land outweighed the dangers of the site.

Mayoral Committee Member for Human Settlements Councillor Malusi Booi confirmed the demolitions. Asked if the City had a court order to evict the residents, Booi said the resident’s claims that the land was already occupied in February and June last year were untrue. “The City’s Anti-Land Invasion Unit removes structures that are unoccupied or unfinished. This is not an eviction in terms of the law.”