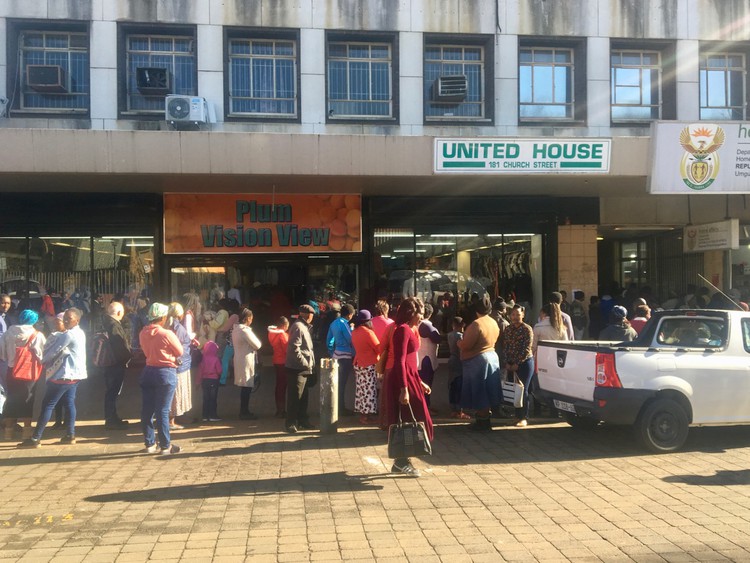 In April Home Affairs Minister Malusi Gigaba made a surprise visit to the Pietermaritzburg office and promised to deal with the long queues. Photo: Nompendulo Ngubane

“The queue is ridiculously long,” complained Sandile Mbhele outside the Home Affairs office in Church Street, Pietermaritzburg, where she had come to collect her ID card.

“I’m carrying a seven-month-old baby. There are no chairs or shelter to shield us from the cold or rain. It’s cold … There are people who are very old. They stand long enough outside despite them waking up early … We come from very far areas and coming to Pietermaritzburg is costly. I cannot be coming here everyday.”

In April, Home Affairs Minister Malusi Gigaba made a surprise visit to the Pietermaritzburg office. He promised that over a period of 12 months his department would deal with the long queues.

His plan included speeding up the process of building new offices in Impendle and Bulwer. Gigaba also said the department would improve productivity in the Pietermaritzburg office.

But people say the queues remain terrible. Zoleka Mnyandu from Richmond was making his third attempt to apply for a new ID card. This time he had arrived at 5am to secure a space at the front of the queue. The office would only open at 8am.

“The queue is not moving. It moves after a long time. You can go around town and come back after an hour, the queue would still be the same. Last Friday, I was turned back when I was very close. I had no choice but to go home,” said Mnyandu.

The Pietermaritzburg office services New Hanover, Richmond, Bulwer, Impendle and other areas further afield. The queue is monitored by the security guards at the door. There are two lines, one for applications and one for collections.

People said they were left unattended when employees took lunch, but Home Affairs provincial manager Cyril Mncwabe said there was a lunch roster in place. “They don’t leave the counter unattended,” he said.

“Our offices have a high volume especially on school holidays. At that time we prioritize students in uniform,” said Mncwabe. “A person walks around the queue outside. They inform the clients on how long is the queue. By doing so, we are giving people a choice to wait or visit the offices some other time … The queue walking is done twice or more to ensure that everyone gets the message,” said Mncwabe.

GroundUp did approach Gigaba’s office for comment but we were referred to Mncwabe.