“He heard little voices coming from the inside” 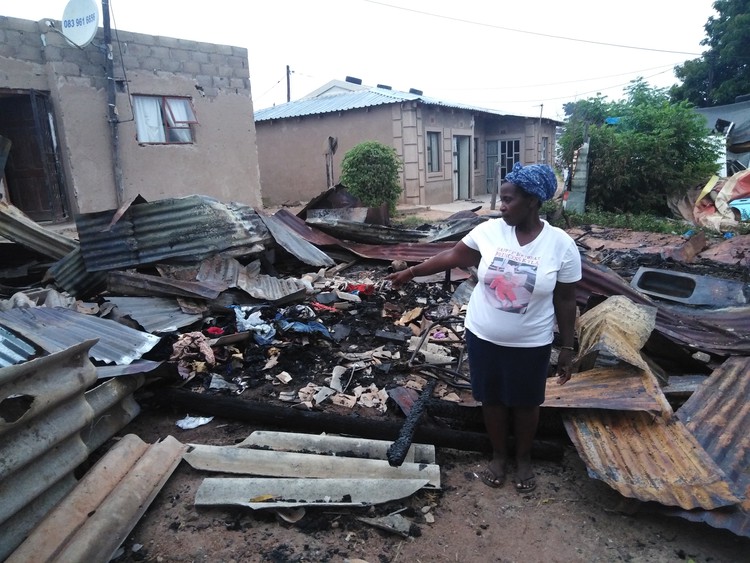 Bongiwe Mazeka points out the remains of her home after it burnt down on Sunday night. Her three children who were home alone at the time were rescued by a neighbour. Two of the children are being treated for burn wounds. Photo: Musa Binda

A resident of C Section in Lindelani, north of Durban has been hailed a local hero after he saved three children trapped inside a burning shack.

Thembelihle Mazeka, 17, was looking after her younger siblings, Nhlanhla, 13, and Xolani, 9, on Sunday night when a candle is believed to have fallen over while they were asleep. Thembelihle and Xolani sustained burns on their faces, arms and feet while Nhlanhla was unharmed.

Their mother, Bongiwe Mazeka, 42 says she was looking after a neighbour’s infant baby while the mother worked night shift. “I take any piecemeal job I can get to help raise my kids. This time, I got a job that required me to leave my kids all by themselves at home at night,” she said.

Mazeka said another neighbour called her and told her to rush back home because of a fire in her shack. When she arrived, her shack was engulfed in flames. “People told me that one of my neighbours, Sqo Mchunu, saved my kids after he immediately noticed that the shack was on fire. They say he heard little voices coming from the inside asking for help,” she said.

“I am thankful to him, if it wasn’t for him, I would be grieving the tragic death of all my kids now,” Mazeka said.

Mchunu, 39, said he was on his way to a nearby spaza shop when he noticed the shack on fire. “I walked towards the shack and heard the screams of small kids. I immediately kicked the door down. I saw the kids standing just next to the door and grabbed them out quickly,” he said.

Thembelihle and Xolani were taken to a nearby clinic before being transferred to King Edward VIII Hospital on Monday afternoon where they remain for further treatment.

Abahlali baseMjondolo local leader, Zanele Mtshali was also at the scene after the fire. Mtshali said attempts to get ward councillor, Simon Khuboni to come and assist the family were in vain. “We are disappointed with how the ward councillor chose to handle this matter. It was a tragedy that required him to come immediately or send one of his committee members but he didn’t bother. The Mazekas had to rely on us as their neighbours for food, shelter and clothes,” he said.

GroundUp contacted Khuboni who confirmed that he had not visited the family. “I was home in the rural areas for the past few days but I have just returned in Durban. I have notified the Disaster Unit within the eThekwini Municipality about the tragedy.”

He said he would visit the family.

In a statement Mtshali said residents had been asking for electricity for years. “The community does not have electricity which is why the family had to resort to using the candle. When we are given formal access to electricity by the state, it always comes after years of struggle. Our movement has been insisting that shack fires are political since 2005, and insisting that they be treated as a national emergency and that urgent measures be put in place to mitigate the risk of fire,” he said.