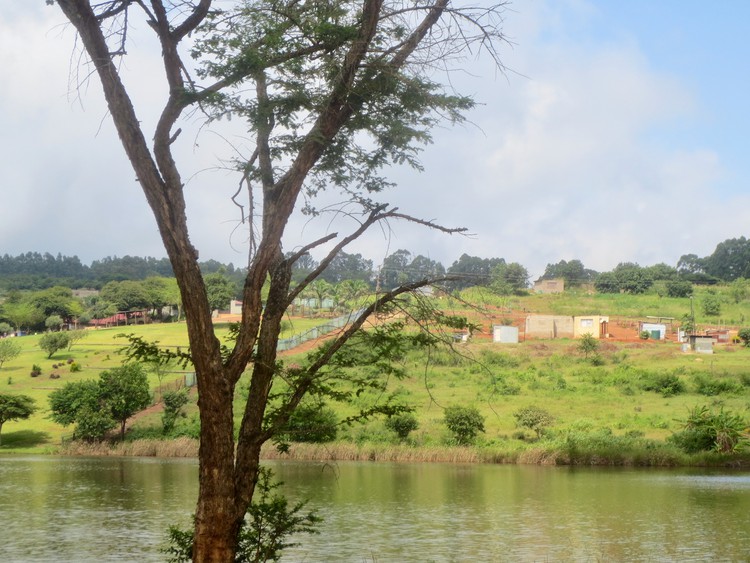 Magangeni’s only source of water is Lemana Dam, which Elim mall is using. Photo: Bernard Chiguvare

Villagers in Magangeni say they are upset with Chief Samuel Mukhari, accusing him of breaking a promise to sink boreholes for them. The traditional council, however, denies that any such promise was ever made.

The village of about 100 households is 30km from Louis Trichardt in Limpopo. The construction of a sizeable mall in Elim, about 5km from Magangeni, has left villagers fearing for their water supply.

Their only source of water is Lemana Dam, a 15-minute drive away. GroundUp saw a bakkie, hired by members of the community, full of empty 20-litre containers, heading out to the dam to collect water. There is no tap water in the village.

The Elim mall, owned by Twin City, has several chain stores, Shoprite, and several others shops, including fast food outlets McDonalds and KFC.

According to community leaders, when construction started on the second phase of the mall two years ago, the chief promised that in return for using the Lemana dam, boreholes would be drilled for the village.

“[If] it [Lemana] dries up we are going to be in trouble. Elim mall is a big entity and I am sure they have alternatives,” said a member of the community who did not want to be named.

Some homesteads have boreholes and sell 20 litres for R2, but not everyone can afford even this.

Mukhari referred GroundUp to Vicky Muvhali, chairperson of the Njakanjaka traditional council. He said, “I am not aware of this promise, but I was chairing the meeting where we agreed that the mall should get water from Lemana dam. We agreed with the community structures … the water would be purified … so that the community gets water. Elim hospital will also benefit if purified water will be piped to the hospital from the mall.”

He said that the leadership structures of communities frequently changed and at times individuals claiming to represent the community presented themselves at meetings and then misinformed their communities.

Several members of the community told GroundUp they had tried to break the pipes to stop the mall getting water from their dam. Muvhali said he was unaware of any such action.

“Most Sundays we hold community meetings, but the chief is silent about the whole issue,” said a villager, who also did not want to be named. “We really do not know what to do. Anyone who dare raise the issue may be ordered to leave the village. We really are afraid of the chief.”

Correction: The original version said Spar was a tenant of the mall. Spar is not a tenant of Twin City Mall. We apologise to Spar for the error.