“As far as we are aware nothing has been done by SAPS.” 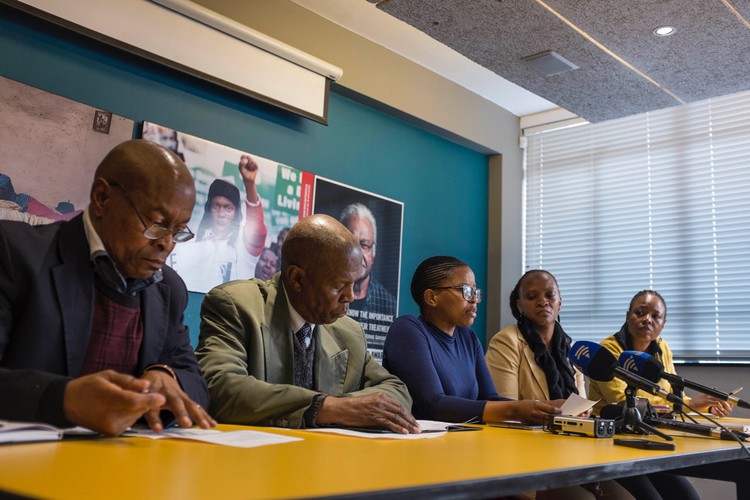 The committee representing the families in the the Life Esidimeni scandal. From left: Andrew Pietersen, Lucas Mogwerani, Nomvula Nonjabe and Christine Nxumalo briefing the media as to issues surrounding the relocation of mental health patients at the SECTION27 offices in Braamfontein. Photo: Ihsaan Haffejee

Representatives of families affected by the Life Esidimeni scandal described their concerns with the implementation of health ombudsman Malegupuru Makgoba’s recommendations made earlier this year. Over 100 people with mental health problems died due to negligence by the Gauteng Department of Health when they were removed from Life Esidimeni centres and placed with NGOs.

Speaking at the SECTION27 offices in Braamfontein, representatives of a family committee briefed media. Committee member Christine Nxumalo, who lost her sister Virginia Machpelah after she was placed in an NGO, said the committee was formed so that the families of patients could be centrally involved in the process to relocate patients to more appropriate care, and also to check if the health Ombudsman’s recommendations were being met.

Nomvula Nonjabe, whose sister has recently been relocated, said a concern the committee has is that the contracts between the Department of Health and the new facilities where patients have been moved to have not been finalised. “We had a meeting last week with the head of department and MEC and they have promised to finalise these contracts by the end of the week,” said Nonjabe. She said that if something should happen to patients at those facilities it would be difficult to hold anyone accountable as no contacts have been signed. “So for example, some of the patients don’t have adequate clothing in these facilities but it becomes difficult to challenge the facility because there is no service level agreement.”

“Only the chair of the board has been removed but the other members have not. So how can you expect the board to function properly when you still have the same people there under whose watch this [patient deaths] happened,” said Nonjabe.

The committee is also frustrated with the way the South African Police Service (SAPS) has been dealing with the inquest into the deaths of the patients. “We are hoping that the police can be given sufficient information so that they can proceed with criminal charges,” said Nonjabe. When asked if any charges or arrests have been made in relation to the negligent conduct of the NGOs, Christine Nxumalo said: “As far as we are aware nothing has been done by SAPS. My sister’s case, for example, goes back to 2016 but I have yet to receive a post mortem. We have raised this with the Premier and the Minister who have promised us that they have had engagements with the SAPS and the NPA in which they will fast track the process of investigation.”

GroundUp has sent a request for comment to both the health department and police. This article will be updated when they respond.