Left in the Dark: a blind student’s story 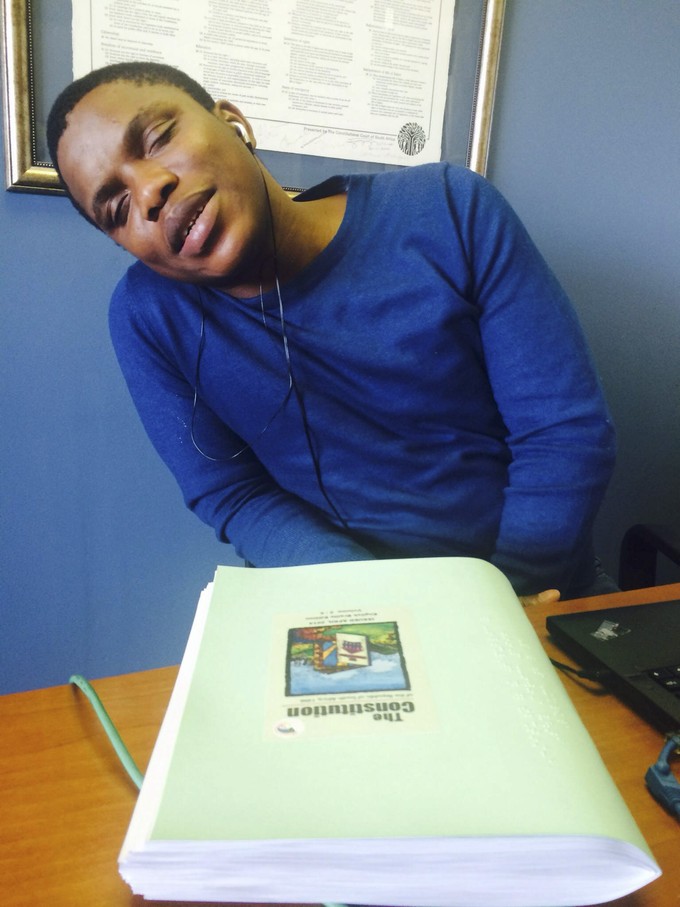 In late 2014 and early 2015, along with colleagues from SECTION27, I visited the 22 public special schools for visually impaired learners in South Africa. Our report on these visits - “Left in the Dark” - is an indictment on the education system for children with disabilities. It is also upsetting to me as a completely blind person.

I share my story here because it is the typical story of a poor black child with disability in South Africa.

I am from Clermont in Durban. From the age of four, I wore glasses, after it was discovered that I was short-sighted. With the glasses I was free to run the banks of the stream bordering our neighbourhood, to play with other children in the debris that covered the sides of the stream and to chase pigs in the cane fields. These were happy times.

In December 1996, at the age of nine, everything changed when my eyesight deteriorated very quickly. I had started attending a former Model C boys school in Clairwood as my family sought to invest in my education. When I was in grade 4 in 1997, it became clear that I could no longer cope and my mother was informed that the school could no longer accommodate me.

I spent the whole of 1997 out of school, waiting at home with my grandmother for my friends to return from school each day. My mother remained hopeful that with the support of the family I would find a school that could accommodate me. I am grateful that she persevered.

The Natal Blind and Deaf Society helped her place me at Arthur Blaxall School for the Blind in Pietermaritzburg.

Like most other children at the school, I had to stay in the hostel as my family could not afford to transport me to school every day.

I was overjoyed about returning to school. I was told I would learn to use my fingers to read. I was so excited that on the morning of my first day I took a print magazine and started feeling the pages intensely over and over, hoping to read the print with my fingers.

I was disappointed to realise that reading using fingers was something called Braille, a tactile system of dots on a page, with many complicated signs and signals called contractions. It was a whole new world for me. I had to attend a special class to learn Braille. It took me five months and only then was I put into the grade four class.

During my time at Arthur Blaxall, we all had Orientation and Mobility instruction. This allows blind and low vision learners to adapt to our environment and equips us to be independent. There are important skills for daily living like counting money, catching taxis, getting dressed, cooking, and working out where you are in a room and finding your way from one place to another.

The downside of my school was the hostel. House parents, who are sometime employed on low wages by the Department of Basic Education or by school governing bodies, and are sometimes volunteers, cannot give children with disabilities the individual attention and love that all children need. In my school, they failed to understand that we had been forced to leave our families and were still struggling to adapt. Some house parents would hit us and treat us very badly.

This problem continues today in special schools around the country with the Department reporting “extremely poor conditions in many special school hostels” and high rates of “child abuse”.

The condition of our school started deteriorating during my time with the resignation of skilled teachers and the eradication of essential programmes. The absence of these can now be observed throughout the country.

It was disturbing to observe in our visits that most schools for visually impaired learners do not have a special class, or teacher, to teach the learners Braille. More worryingly, because of a failed tender process in 2012, the Department has still not produced the more than 600 titles that make up the curriculum in Braille. Moreover, the majority of teachers at schools for visually impaired learners cannot read Braille at all.

Less than half the schools for visually impaired learners employ orientation and mobility practitioners.

After completing grade 12, I was accepted at the university of KwaZulu-Natal in 2007 with three classmates from Arthur Blaxall. We had to adapt to an environment that is not suitable for us. Our lecturers, like many teachers at schools for visually impaired learners today, had no understanding of blind people.

It took a long time to learn to get to classes alone or to find the cafeteria, but the biggest challenge was to access the academic material. We received “course packs” to read on a computer using a screen reader called “JAWS”. We had to wait a long time for the these bundles while other students had readings easily available. Fortunately JAWS was not foreign to me, as I had learnt the software at Arthur Blaxall and at Madressa Noor for the Blind, which I attended for religious reasons. Other visually impaired students did not adapt as easily.

Many visually impaired learners across South Africa are in a hopeless situation because of the failure of the government to protect their right to quality education.

I share the views of the former Constitutional Court judge, Justice Zak Yacoob, in his foreword to SECTION27’s report. Judge Yacoob, who is totally blind, said of the current state of education for visually impaired learners across South Africa: “I am pained to say that if the facilities at the school at which I was a pupil had been as paltry as in most of the schools described in the report, I would never even have completed school successfully.”

Khumalo is a researcher at SECTION27. The organisation presented its findings to parliament’s Portfolio Committee on Education this week.