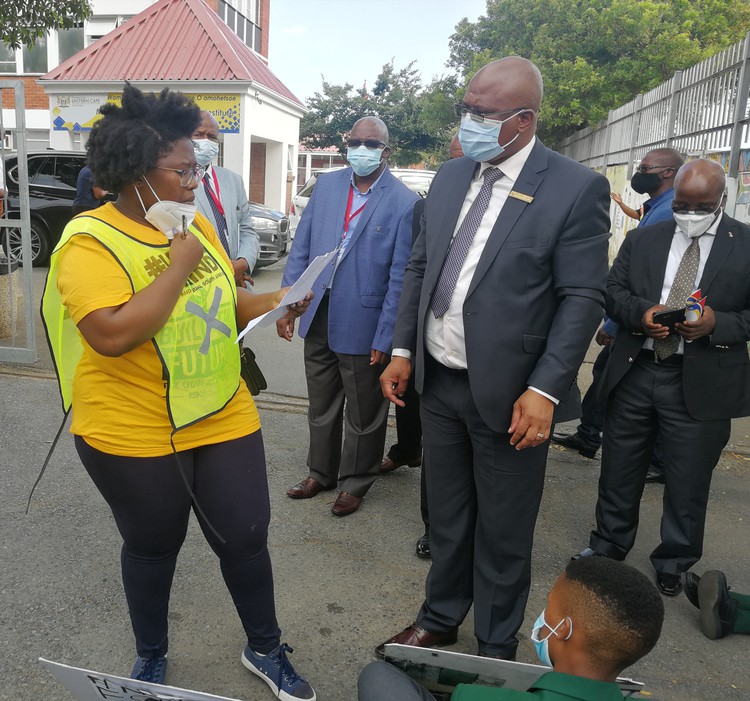 At least 30 learners from four schools in the Buffalo City District picketed outside the Eastern Cape education department’s Mandla Makupula Leadership Institute in East London, where matric results celebrations were held on Tuesday.

The picketers, led by Equal Education, were demanding that the government fix infrastructure and provide more funding to public schools. They said they chose to picket at the celebrations to highlight the plight of thousands of learners at neglected schools.

“In many public schools with overcrowded classrooms and unsafe toilets, and where taps run dry, learners and teachers fight against the odds to achieve excellence. This is an unfair burden,” EE said in a statement.

Elizabeth Biney, a researcher at Equal Education in the Eastern Cape, said they decided to protest after many failed attempts to meet with Education MEC Fundile Gade.

She said the province had the worst school infrastructure backlog in the country and the excuse used by the department is that it does not have funds.

“We are demanding that our schools are fixed. We are advocating for the national treasury to increase the money spent on education,” said Biney.

Eastern Cape Premier Oscar Mabuyane came out to speak to some of the learners who told him about the challenges at their schools.

Learners from Kuyasa High School in Dimbaza told Mabuyane about the shortage of classrooms and teachers after returning from lockdown. They said as a result learners in some grades only attended school once a week.

Learners from Qonce High School in King Williams Town also complained of classroom, teacher shortages and ablution facilities that are in poor conditions.

Learners from Richard Varha in Dimbaza said they needed more school desks to allow for adequate social distancing in classrooms and they did not have enough textbooks.

The group handed over a memorandum to Mabuyane read by Athenkosi Sopitshi. They demanded that all schools get adequate water and sanitation. They also requested details of the department’s plans to transport 30,000 learners recently removed from the scholar transport system.

“Many learners were lost from the schooling system due to Covid-19. We want to know what our MEC will do to bring them back into the system. We also want concrete plans on the schools that were on the project list but have since been removed due to budget constraints,” said Sopitshi.

Mabuyane promised to ensure that the department sends officials to the learners’ schools. He asked Equal Education to send his office a list of schools they claim have been taken off the project list. “I want to ensure that officials go to all the schools you’re referring to and that there’s a report for each school,” he said.

After the picket, Gade denied avoiding meeting Equal Education. “I’m meeting with deputy minister [Reginah Mhaule] on 3 March and at the heart of our discussions is how we sort out the issue of safe schools, ablution facilities, pit latrine toilets as well as challenges that relates to incapacity of the schools as per the department’s safe school policy,” said Gade.

He said the issues raised by the Equal Education memorandum would be taken into consideration when the department holds its planning session.