Villagers have to carry their dead over a “dangerous” river

Children stay away from school when rains fill the river 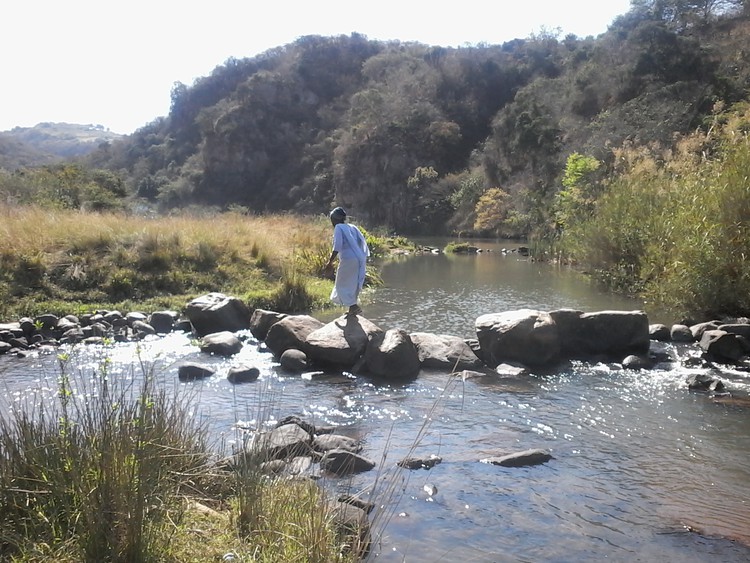 Villagers from Ogunjini in Verulam, north of Durban, often have to carry sick and even deceased people across the Mdloti River. They say their pleas for a pedestrian bridge have fallen on deaf ears. Photo: Nokulunga Majola

In order to get to school every day 13-year-old Nosipho Msane removes her socks and shoes to give her better balance to hop from one rock to another across the Mdloti River.

“Sometimes when it rains and we see that the river is going to be full by the time we get back from school, we don’t go to school,” said Nosipho.

The grade 8 learner is among dozens of learners and villagers in Ogunjini in Verulam, north of Durban who have to cross the river daily to get to school, work or the nearest clinic. The villagers say they have been asking the eThekwini Municipality for years to build them a footbridge to no avail.

Residents say they have had to carry the sick and even deceased people across the river to meet up with an ambulance or hearse on the other side because the village is currently inaccessible by car.

Nosipho’s grandmother Lindeni Msane, 51, said that her two children and five grandchildren attend different schools on the other side of the river. “Crossing the river is the shortest and the only route to get to their destinations. We really need a footbridge to make it easier for us to cross. The road on this side is not that good but that can be fixed,” said Msane.

Jabulile Shangase said she moved to the village in 1996. “There is no development in this place. I have to cross the river at least once a week to get to the shops, church or clinic. I have fallen off and hurt myself a couple of times on these rocks and it is not pleasant,” said Shangase.

She said that when it rains, no one can cross. “All the children that attend schools on this side of the river get stuck and they have to seek shelter with friends and relatives,” said Dube.

Sakhamuzi Shangase said, “We should have had a footbridge a long time ago because this is not the first time we have asked for it. This is a serious concern because we are not getting younger. Maybe it was okay when we were young, but as we get older, our bodies cannot take such strain. Something must be done about this.”

Councillor Chris Langa (DA) said that he recently witnessed first hand how desperately the villages need the bridge. “I recently attended a funeral in the area and had to leave my vehicle across the river. I saw how difficult it was to carry the coffin across the river.”

Langa promised that he would take up the issue with the City.

When asked about the villagers’ request for a bridge, municipality spokesperson Msawakhe Mayisela said it only received a request last month for two pedestrian bridges in Ward 59 .

“These sites will be inspected to determine whether they are suitable for community footbridges. The safety of our communities remains a priority. The City will look into the matter and address it with the urgency it deserves.”