Simo Maninginingi Kwepe was hit by a train on Friday morning 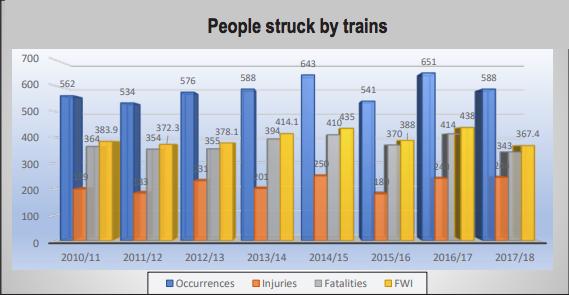 Number of annual injuries and deaths of people struck by trains. (FWI stands for Fatalities and Weighted Injuries. It is the number of people killed plus 0.1 x the number of injuries.) Source: Railway Safety Regulator

A learner, who was about to turn 17, was killed on the Cape Town Southern Metrorail line on Friday morning.

“Preliminary reports indicate that a young male, +/- 16 years old, fell from a moving train between Salt River and Woodstock while attempting to jump from one train to another,” said Riana Scott, spokesperson for Metrorail.

Simo Maninginingi Kwepe, from Zonnebloem NEST Senior School, was certified dead on the scene. The incident was reported at 7:33am. Emergency services and the police closed the line during their on-site investigation. Train traffic was diverted until 12:30pm.

Zukie Vuka, an organiser for commuter activist group #UniteBehind, said: “It is not unusual for people to jump off trains … If the next train is going to come [only] in the next hour or two, imagine if you are going to school or work. You have to be at the same station waiting for an hour because there are not enough trains. People are desperate.”

According to Vuka, a number of people have been killed on Cape Town Metrorail lines since January. Metrorail could not confirm the number killed at the time of publication. The Railway Safety Regulator reports that 343 people were struck dead by trains in 2017/18.

Kwepe died less than 24 hours after Minister of Transport Blade Nzimande announced his plans to address the problems within the Passenger Rail Agency of South Africa’s (PRASA), state-owned enterprise that runs Metrorail. PRASA has been embroiled in corruption scandals known as PRASALeaks.

“This is the reason why we’ve been saying to PRASA we need to start finding out where the money is,” Vuka said. “Because a lot of people are dying. People are being forced to ride on top of trains if they are full, and people get pushed off because they are overcrowded.”

“Nzimande announced his intention to once again find out what is wrong with our rail service by appointing a task team,” #UnitedBehind said in a media statement. “The announcement was bizarre and irrational because Minister Nzimande is fully aware of numerous reports on governance and management instability, lack of safety, rail stock and infrastructure maintenance, state capture, infrastructure, incompetence, mismanagement and rot at the Passenger Rail Agency of South Africa.”

#UniteBehind has been in court since December 2017 demanding the minister appoint a permanent board. For almost a year now, PRASA has had an interim board. In the media briefing on Thursday, Nzimande re-appointed the interim board for six more months.