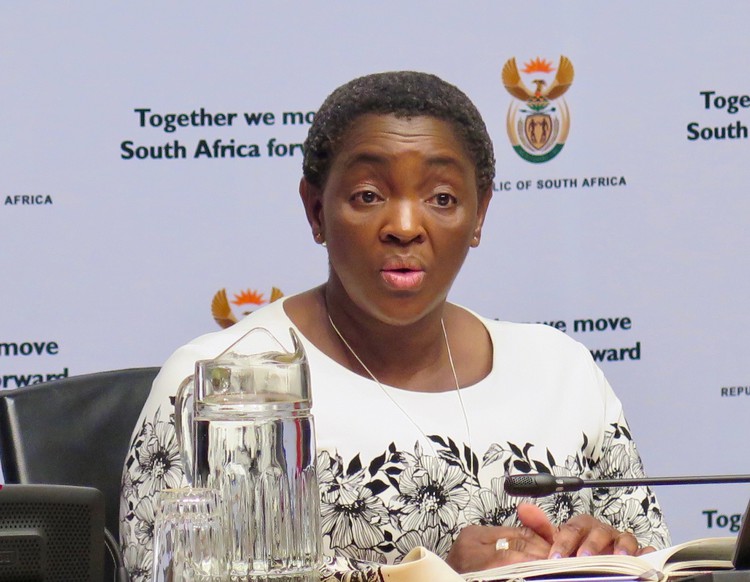 Minister of Social Development Bathabile Dlamini did not attend the meeting in Parliament fat which the SASSA contract was discussed. Photo: Ashleigh Furlong

The South African Social Security Agency (SASSA) may have to offer as much as 30% more to Net1 when it negotiates a new social grants payment contract on 1 March.

On Tuesday, in response to questions from MPs at a meeting of the Standing Committee on Public Accounts (Scopa), SASSA project manager Zodwa Mvulane acknowledged that SASSA CEO Thokozani Magwaza had sent a letter to the National Treasury warning that the agency might have to offer a much higher fee when it renegotiates the contract. The contract expires on 31 March.

Cash Paymaster Services — the company contracted to pay grants to about 17 million recipients — currently charges an “administrative” fee of R16.44 per beneficiary.

MP Tim Brauteseth (DA) said that the new rate of up to R25 per beneficiary would cost SASSA over R3 billion, over R1.3 billion more than its budget of R2.6 billion. “Where will this money come from? Now you are putting a gun to Treasury to come up with that amount,” he said.

The Centre for Applied Legal Studies, on behalf of advocacy group Black Sash, has asked the Constitutional Court to take back the oversight of grant payments when the contract expires. “The emergency situation created demonstrates that the Minister of Social Development does not have adequate oversight over SASSA,” the Black Sash said, announcing the application to the court filed on Tuesday.

The Black Sash said SASSA’s failure to take over the payment system itself left the agency no choice but to enter into “a further uncompetitive contract with CPS”.

Mvulane told the committee that the suggested fees of R22 to R25 per beneficiary listed in Magwaza’s letter to the Treasury “were estimates based on [6%] CPI” incurred since the initial contract with CPS was signed in 2012.

She said during the negotiations with CPS on Wednesday 1 March, pricing and new terms to avoid further deductions from beneficiaries’ accounts would be discussed. The negotiations for the new contract would be within the budget.

She said the new contract would be negotiated as an “emergency procurement” under the Public Finance Management Act which she claimed Treasury would support.

Brauteseth asked: “Would you agree that this emergency was created 100% by SASSA?”

To which Mvulane answered: “We can only take 50% of the blame. It must be noted that the due diligence process started late.”

He also questioned why NET1 CEO Serge Belamant was able to tell shareholders on 10 February that talks between Net1 and SASSA could not be made public because they were “too complex”.

MPs were also annoyed that the Advisory Committee set up in September 2013 to look into the payment of grants, was paid a total of R4 million over the period of a year. “Some of the members of this committee went on to run the work streams recommended by the committee. Do you think that was appropriate?” asked Brauteseth.

Earlier on Tuesday, the briefing got off to a heated start as MPs were angered by the absence of Social Development Minister Bathabile Dlamini and SASSA CEO Magwaza. Dlamini was attending a press briefing just across the road at Parliament’s media centre. SASSA said Magwaza had been booked off sick on Friday for seven days. National Development Agency head Vuyelwa Nhlapo was appointed acting CEO hours before the Scopa briefing.

Scopa’s members were annoyed that Magwaza had not appeared before the committee, with some even suggesting the absence was an attempt to avoid accountability.

MP Shedrack Booi (ANC) said Magwaza and Dlamini’s absence was an attempt to avoid accountability. Annoyed by Nhlapo’s appointment at the 11th hour, he said: “She looks like a flower. She has no clue what is going on here.”

MPs called for a full parliamentary enquiry into SASSA and its “wasteful” expenditure. They also requested that Dlamini be summoned by Scopa to answer questions.