Langa’s dirty hostels have not improved in 20 years, say residents

But City has plan to upgrade them, says councillor 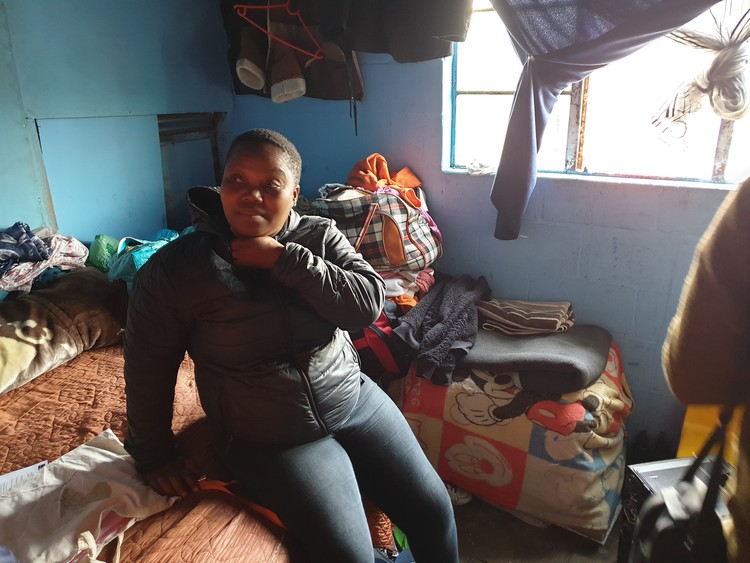 Nomabali Maholwana says she’s been living in this hostel in Langa for more than 20 years but the living conditions have not improved. Photo: Mary-Anne Gontsana

Bad smells, rubbish and stagnant water lead you to the burnt home of Nomabali Maholwana. She lives in an old hostel in Langa’s Zone 24.

Maholwana, who lives with 11 other family members, says she has been living in the hostel for over 20 years. They have not been renovated in that time.

The hostels are owned by the City of Cape Town. Mayco Member for Human Settlements Malusi Booi said that during apartheid, the hostels in Langa, including “The Zones”, were built for black African men who were employed as labourers for various companies. “During this period, it was a prerequisite of employment for companies to provide hostel accommodation for their labourers.”

Maholwana says she and her family can only use two of the three rooms, as the other room is occupied by another family. One side of the house, which used to be a kitchen but now only has a sink and a tap in a small corner, has black walls after a fire in 2011.

Sitting on a bed in a cluttered room with hardly any space to move, Maholwana said, “I am not exactly sure what started the fire, but it did not start here by us. It started next door and spread to us. We lost most of our clothes in that fire.”

“The room that we live in, if you’ve noticed, is a shack that we have added on. We extended with zinc to make more space. There are 12 of us living here, seven adults and five kids. It’s really tough but we have no other option. Outside, it is constantly flooding because the water has no way to flow and the drains are blocked,” said Maholwana.

There is only one toilet available for Maholwana and her family that they share with other residents. But she says the toilet constantly blocks.

Though rental charges for hostel bed spaces are R20 per month, Maholwana said they did not pay rent.

Maholwana’s health makes her living conditions harder to endure. “I have had heart problems since I was very young and have already had two operations. I am better now but who knows what can happen if I continue living like this.”

Maholwana said she has applied for a house but is still on the waiting list.

Another resident, Chwayita Mbeleki, who does not live far from Maholwana, said she was living under the same dirty conditions and did not even have a toilet.

Just behind Maholwana’s home, another hostel can be seen with cardboard used as windows and a huge pile of uncollected rubbish not far away from the door. In the same yard, are two shacks.

Booi said a plan has been made to upgrade the flats and hostels in the Langa Zones and some will have to be demolished and built anew. He said there are about 11,000 hostel beds in Gugulethu, Langa, Nyanga, Lwandle and Mfuleni and these need to be “transformed”. The plan is based on a survey of the hostels in 2010.

The construction cost of one 40m2 hostel unit is roughly three times an RDP house according to Booi.