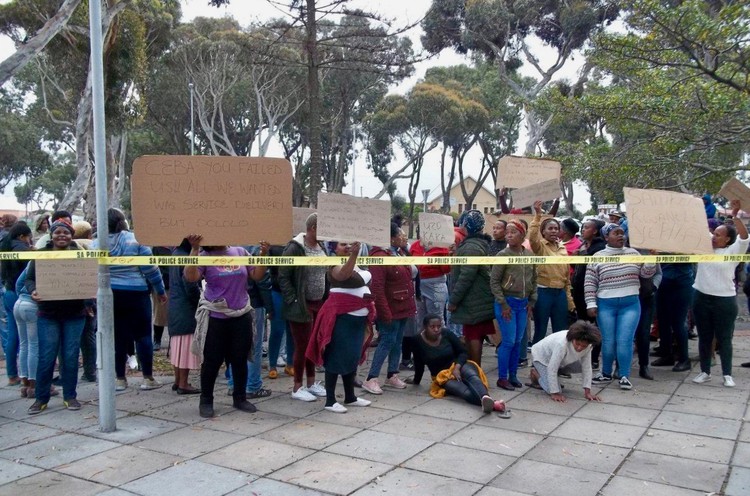 Dozens of residents demonstrated outside the municipal offices in Langa on Monday. Photo: Vincent Lali

Dozens of residents demonstrated outside the municipal offices in Langa on Monday. They said they were unhappy with basic services and they want Ward 53 Councillor Samkelo John (ANC) removed from office.

They sang struggle songs and carried placards that read: “Councillor you have failed us” and “All we wanted was service delivery.”

The ward councillor dismissed the protest saying, “Those leaders lost during the local government elections. Now, they want to rule from the grave.”

Community leader Michael Duma said informal settlements and hostels in Langa are filled with litter. “Most residents staying at hostels don’t even have wheelie bins. As a result, they dump their rubbish at illegal tips … We want the City to give each family staying at a hostel a wheelie bin and put up skips in informal settlements for residents to dump their rubbish.”

“We want flood victims to be moved to dry areas,” said Duma. He said people in ward 52 live near sewage and storm water drains which during heavy rains “fill their shacks with filthy water and shit”.

Duma said residents wanted John to explain how he spends the ward money.

“He doesn’t get street lights, toilets and drains fixed, so we want him to vacate his office,” he said.

Welekazi Lizo, who joined the protest, said water was a problem in Zone 18 and they were using an illegal connection now. “Our toilets are damaged and blocked,” she said.

Xoliswa Twayini said in Zone 26 the toilet pipes are broken.

Community leader Thembelani Nyamakazi said street lights were not working. “Thugs easily rob residents under the cover of darkness on their way to and from work in the morning and in the evening,” he said.

“A damaged flood light has yet to be fixed in Zone 24,” admitted ward councillor John.

John said, “I will always communicate with residents of Ward 52 through Ward Report Back Public Meetings as well the Area Public Meetings. I have divided my ward into five areas (Area One is the hostels/zones; Area Two is Joe Slovo, both informal settlements and RDP flats; Area Three is the N2 Gateway which includes CRU Flats; Area Four is the Settlers Phase One which includes bond houses and Area Five is the old hostel flats) due to its vastness.

“I convened a meeting on 20 June 2019 which was followed by the Area Meetings. All five areas of the ward are part of the Ward Committee; the Areas Two and Four members have resigned.”

“These are the projects that I spent on during the last financial budget:

Mayco Member for Water and Waste Xanthea Limberg said, “The City experiences around 300 sewer overflows each day across the metro, and all with the exception of a tiny minority are a result of residents misusing the sewerage system rather than infrastructure defects or a lack of capacity.”

Councillor Malusi Booi, Mayco member for Human Settlements said, “The City of Cape Town is mindful of the acute need for housing … We are making every effort to address this matter and to provide services within a planned and fair manner, wherever possible within the constraints such as available budget, suitable land and community dynamics that are being experienced.”