Owner accuses those opposing his business of being xenophobic 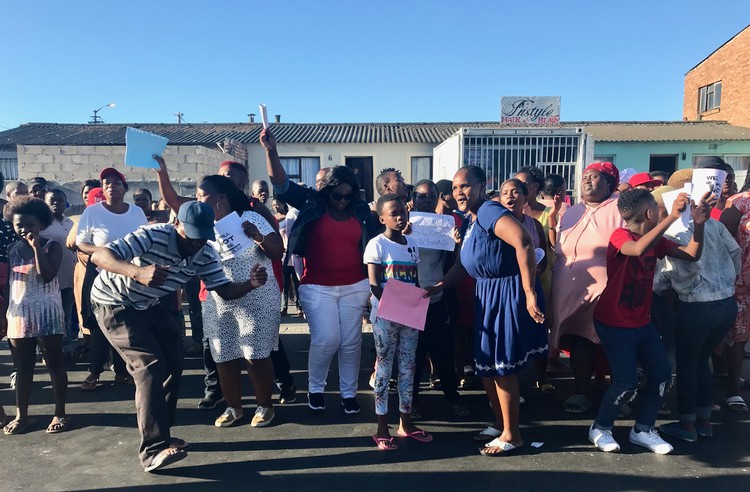 On Friday, a group of Langa residents intending to shut down a tavern on King Langalibalele Drive stood off against another group of demonstrators who want to keep the business open. Photo: Tariro Washinyira

On Friday, opposing groups of Langa residents protested for and against the reopening of a tavern.

The two groups stood on opposite sides of King Langalibalele Drive, where the tavern is located. Each group had about 60 people.

Those in favour of the tavern held posters that read: “Akuzuvalwa (They are not going to close)”, “Yekani umona vukuzenzele” (Stop being jealous, do your own stuff), “Nithini ngei sebenzi yethu” (What are you saying about our jobs).

Protesters against the tavern held posters that read: “We will not be silenced”, “Enough is enough” and “Stop selling fake alcohol”.

Tavern owner Don Vaphi said those against him were jealous and xenophobic. He said the tavern opened in 1995 and it employs 13 people.

“I have a partnership with Chinese people. They have the money and I am the one who was granted a licence. Those [opposed to the tavern] always make accusations that Chinese people are selling fake alcohol. But they buy liquor from South African Breweries,” he said.

Community leader Zolile Kasana said the tavern had been shut down in February 2019 after residents delivered a petition to the Western Cape Police Ombudsman. But on Wednesday, the Parow liquor licensing tribunal gave the tavern authority to reopen.

The petition stated: “The community is living under constant fear of experiencing gunshots and stabbings. Operating hours of this Chinese tavern pose a challenge since they open at 10am till the following morning at 4am. Several incidents were reported to our local police but no action was taken. We are told to take videos and pictures of the incidents.”

Kasana said: “The area was peaceful when the tavern closed. People have been murdered, mugged on their way from the ATM. Their customers urinate on the streets … Mothers don’t know their children bunk off school and drink here.”

An elderly woman said she can’t sleep at night because of noise from the tavern.

Aletta Jumba said her brother, Vumile, was stabbed in front of the tavern on his way from work. “My neighbour’s child, Unathi, was also killed,” she said.

Addressing the protesters, Captain Maart of Langa police station (who refused to give his first name) said that if the liquor board issues a licence there is nothing the police can do other than force compliance.

“We have submitted reports on violations of the liquor act that have been happening here. [The tribunal] told us there is a grace period. They need proof. What proof do they need if I myself went inside there in the tavern?” Maart said.