Land occupiers in Mthatha won’t move until they get houses

Municipality says the vacant land is earmarked for a “major development” 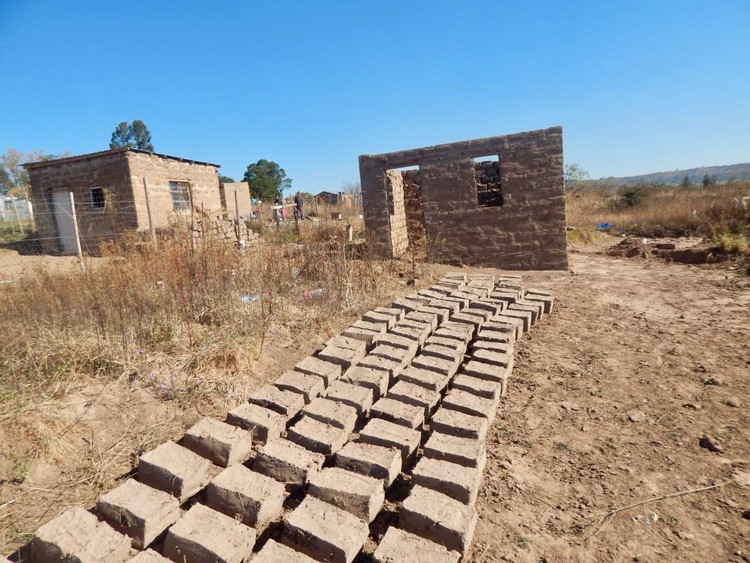 Brick mud houses are being built in a land occupation at KwaMpuku in Mthatha. Photo: Kwanele Mketeni

About a thousand residents of KwaMpuku in Mthatha are battling over land with King Sabata Dalindyebo Municipality. In August 2017, the municipality demolished their homes saying they were illegally on the land. But residents are rebuilding and demanding that the municipality first make proper housing arrangements for them before they are evicted.

Sibusiso Jekemani, his wife, 17-year-old child and a baby, had their home demolished by the municipality on 17 August 2017.

“Only my wife and our last born were home on the day,” said Jekemani, tearing up as he recalled the demolition. “Our last child was only a month old when our home was destroyed with everything in it. The machines I used to cut grass were also destroyed in the demolition and that was the only source of income in our home. It took me months to bounce back.”

But on Saturday, Jekemani was back on the land, building a new home with the help of three friends. “The municipality must acknowledge we’re also entitled to dignity. If they want this land so bad, they must build our homes elsewhere. We refuse to go anywhere if that has not been done.”

Sphosethu Kwedinana said the informal settlement has been in existence for more than 10 years. “They [the municipality] do not want us here so they treat us like we do not exist. It is wrong. We demand our basic rights be attended to. We want houses and we want proper sanitation.”

In July GroundUp reported how the occupiers were forced to relieve themselves in an open field.

Municipal spokesperson Sonwabo Mampoza said, “If people want to build on the unoccupied land, they must first consult the municipality to find out its intentions about that particular piece of land.”

Mampoza said the residents were challenging the municipality to return and demolish their structures – “something which is not in the best interest of the authority [the municipality]”.

He said the municipality could not provide basic services to the residents as they are illegal occupants.

He said the land was reserved for a “major development”.