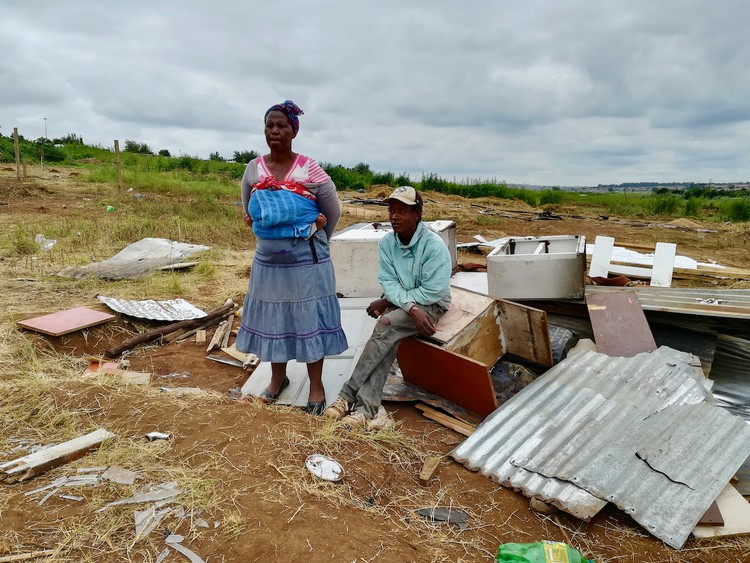 Land occupiers from Tswelopele Extension 8 in Tembisa, East of Johannesburg, are applying for an interdict at the North Gauteng High Court in Pretoria to prevent the Ekurhuleni Metropolitan Police Department (EMPD) from evicting them.

The 118 households want their demolished homes rebuilt and to be compensated for damages incurred during their eviction.

The case was to be heard on Friday, but it was postponed to 16 April to give the judge more time to study the papers.

In the meantime, Ekurhuleni municipality has allowed the occupiers to build up to eight structures as temporary accommodation while the case is being finalised.

The occupation started in August 2018, according to one of its leaders, Florah Tjabadi. She told GroundUp the occupiers were mostly unemployed and unable to pay rent. She said the land had been vacant for over ten years and it had become a hotspot for criminal activity.

Tjabadi said EMPD had evicted the occupiers more than 15 times, without ever showing them an eviction order. The first eviction was on 16 December, four months into the occupation.

In court papers, Lawyers for Human Rights (LHR), which is representing the occupiers, argued that the evictions conducted by the EMPD were illegal and unconstitutional. EMPD did not have an eviction order and it did not provide the occupiers with alternative accommodation. It had also destroyed property of the occupiers, the LHR said.

Louise du Plessis, of LHR, told GroundUp the lawyers wanted to make sure that the “ongoing destroying, damaging and burning of [the occupiers’] homes and personal belongings, also the harassment and intimidation of our clients by the municipality, immediately stops”.

The municipality claimed in its papers that it did not evict people, because the shacks were vacant when they were demolished. It said the municipality did not need an eviction order for shacks that were not properly completed or erected.

It said the property was earmarked for development and the right to housing of other community members was being affected by the occupation.

Joseph Phukubye, one of the occupiers, said EMPD was “just trying to cover up for themselves”. He said people had been living in the shacks with all their belongings for months before EMPD demolished the structures.

“We have video footage and pictures that show people were evicted with all their belongings – with their fridges, cupboards, clothes and everything and we will show that to the court,” he said. “The court will see who is lying and who is telling the truth.”

Phukubye said the community was happy with the arrangement to build additional shacks on the land because “it means we no longer have to share one shack between 20 of us like we are doing now”.