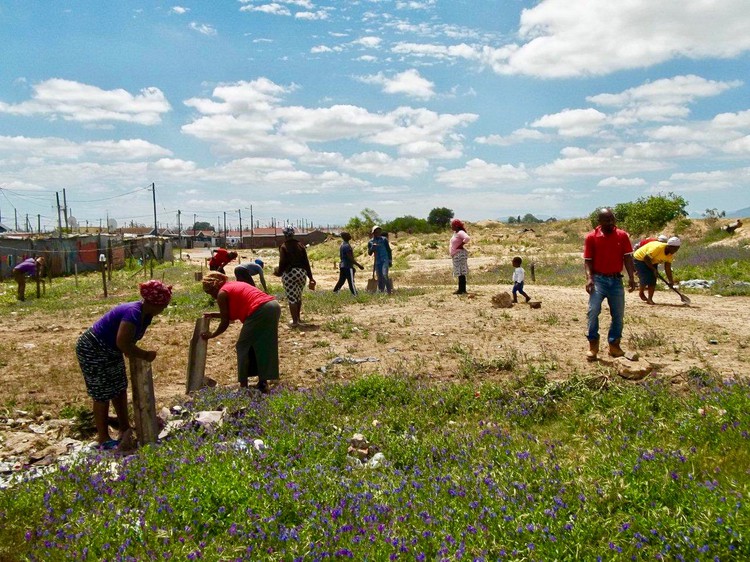 Residents mark out plots at the weekend in an attempt to occupy municipal land in Wallacedene, Kraaifontein. Photo: Vincent Lali.

At the weekend, about 10 people attempted to occupy municipal land in Wallacedene, Kraaifontein. They used asbestos sheets, stones and cleared away grass to mark out spaces to build shacks.

Thandekile Cetyana said, “We want the City of Cape Town to see that we want the land though we don’t have money to buy it … We wish the City could send senior officials to talk to us about how we could acquire the land peacefully because we don’t want to fight.”

Cetyana said he could not afford to pay rent and support his five kids (aged between two and 16) and his young nephew.

“I rely on scarce piecemeal jobs from construction companies for survival, but still I must pay rent, put my kids through school, and buy them Christmas clothes and goodies,” he said.

Nosikhuselo Sodladla said she had occupied the land for her 27-year-old son. “He is mature now. So we both need to have our own places and enjoy some privacy … I’m tired of renting and being cramped in a tiny shack with four mature kids.”

Nokonwaba Nqanabe said she rents a tiny shack and shares it with her jobless husband and two small children. She receives R760 in social grants a month and her rent is R400. “I’m left with no money to buy food and clothes for my kids.”

Nompumelelo Nethi is a seasonal worker on a grape farm near Paarl. She lives with her husband, who does odd jobs, and her four children aged between 3 and 12. “Because we spend almost all our money on rent, we buy our kids second-hand uniforms,” she said.

Nonyameko Mfundisi, who is heavily pregnant, said she had to move. “I breathe smelly air from pigsties and goat sheds every day because my shack is situated near them.”

Thembeka Damoi said she became homeless after she lost her job as a security guard on 10 October. “I left my landlord’s yard because I knew that he would demand rent money at the end of the month, and I won’t have it,” she said.

She had attempted to occupy land elsewhere in the area but the the Anti-land Invasion Unit had taken her shack away. It was worth R5,500, she said. “The unit members refused to listen and simply tore the shack down and left with it.”

He said the residents had re-erected one structure on Sunday, but the City had told them to remove it. Smith said residents who wanted the City to return their materials should call 021 912 4505.