Having done everything through due process, Sakkieskamp residents are running out of peaceful options, as municipality muddles on 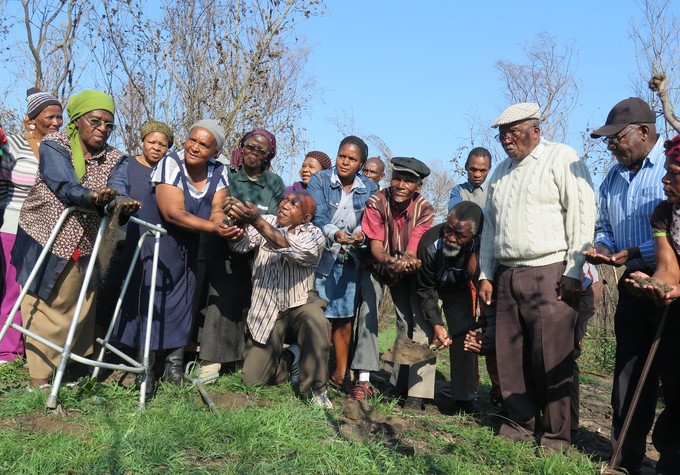 Land claimants take part in a “sod-turning ceremony” on the land that they were promised and have never received. Photo: Ashleigh Furlong

Land claimant Patrick Khohli digs his spade into the soil on the land that he and numerous other families were promised eleven years ago by the Drakenstein Municipality after a land claim made in 1996.

The land is still not theirs, and during the 20 years since the claim was made to the Commission on Restitution of Land Rights, some of the original claimants have died.

The claim centred on the 1972 apartheid-era forced removals of families from Sakkieskamp, Wellington to Mbekweni, Paarl.

Some families who did not “qualify” under the apartheid government to stay in Paarl were sent to various “homelands” such as the Transkei. Khohli, chairperson of the Ex-Sakkieskamp Community Trust, says that the families who were sent out of the Western Cape were not part of the land claim.

As Khohli turns the soil over he is surrounded by about 20 claimants and their relatives, most of them elderly, who have come to the land to have a “sod-turning ceremony” to symbolically stake their claim to the land which is situated on both sides of the N2 in Klapmuts.

Some of the claimants pick up sand with their hands. One scoops some into a black bag to take home.

Khohli says occupying the land “might be” a possibility in the future, but he says they “don’t want to act illegally”. Up and until now, everything they have done has been peaceful.

Khohli, who is also a pastor, prays as the sombre group stands under the Port Jackson trees that have invaded the land.

He says that the story of their eviction and years of struggle for justice is “very painful”. While he speaks he continuously reaches into the folder that he carries and produces documents and letters to backup his claims.

“The only thing that we had been waiting for is the transfer of the land to the trust. And we kept on getting promises that are not fulfilled,” he says.

“In 2005 [we were] brought to the land and shown it. [We were] promised handover would happen,” says Khohli. He says he has proof that they were to be offered the whole farm.

The land belongs to the Drakenstein Municipality, totalling over 200 hectares.

As GroundUp previously reported the commission identified the farm as a possible site for the claimants and in 2005 the Drakenstein Municipality agreed that the claimants could resettle on part of the farm, subject to feasibility studies.

According to minutes from a meeting in 2003 with Drakenstein’s then mayor, Herman Bailey, the mayor “confirmed that they fully support that the land be given to Sakkieskamp community” and that he believed that the property should be kept for restitution purposes.

The Drakenstein Municipality was then presented with an opportunity that it appears it couldn’t turn down – a company wanted to buy the land to develop it industrially. According to the minutes from municipal meetings, a different site was then considered for the claimants.

Minutes from these meetings over the years show how the decision over what to do with the farm was much debated and delayed numerous times. At one point, the municipality offered the company a smaller portion of the farm and then proposed releasing 60 hectares for the claimants, but the claimants refused. A portion of the land was also sold to Eskom and a substation has already been developed on the land.

What exactly the current plan is for the land remains unclear.

“I told them [when you are] writing a contract, [you are] getting an agreement about this and then the next time you go [say] something else – then you are breaching the contract,” says Khohli.

Khohli says that they will not be split up to different areas, and that they want the whole farm, not just a portion.

Theresa Khohli, wife of Patrick, says that in a recent meeting with the mayor of Drakenstein they were told that the commissioner from the Commission on the Restitution of Land Rights must aid them to “enforce their rights”.

During this meeting, the claimants also say that the mayor told them that there was “nothing wrong with the land”. Acting Municipal Manager Jacques Carstens previously claimed to GroundUp that the Klapmuts land had no water connection and was not suitable for farming and housing.

“We wait and wait and wait. We survive,” says claimant Elizabeth James. She says that despite the fact that they are getting tired of waiting she has hope that she will one day live on the land that they were promised.

Kingdom Change Agents Movement, a religious organisation working in the area, is helping the claimants. The organisation’s Andile Tumana says that the claimants have written letters to numerous departments and officials, but that these have “all fallen on deaf ears”.

He believes that if the claimants took the matter to court it would be “solved easily”, because there was a clear breach of contract. But, he says, this wasn’t an option because the claimants don’t have the funds for court action. The Sakkieskamp claimants are just “ordinary people”.

GroundUp contacted Drakenstein and Stellenbosch municipalities as well as the Commission on Restitution of Land Rights. Promised responses to our questions did not arrive by time of publication. This article will be updated when we receive responses.

He said that the municipality is therefore not prepared to release the land for restitution purposes but “is willing to consider alternative options to address the matter”.

Nkasayi stated that the Commission is waiting for the municipality to communicate what these alternative options are and said that the Commission “is always committed to support all the claimants for the finalisation of their claims including the Sakkieskamp community”.

Acting Municipal Manager Jacques Carstens says the claim that the municipality agreed to handing over land but later refused is untrue. The council approved in principle, but there were conditions that had to precede a final decision.

“Council is currently considering alternative land given that the land in Klapmuts is not suitable according to the assessment,” stated Cartsens.

The Municipality will then indicate what land is available and suitable for the needs of the applicants and the Land Claims Commission then negotiates with the claimants and does the handover, according to Cartens.

Correction: This article was, subsequent to publication, corrected to reflect that Stellenbosch Municipality does not own a part of the land.