Land activists march through Sea Point ahead of court case

Tafelberg property to be sold to a private school developer, but Reclaim the City want it for affordable housing 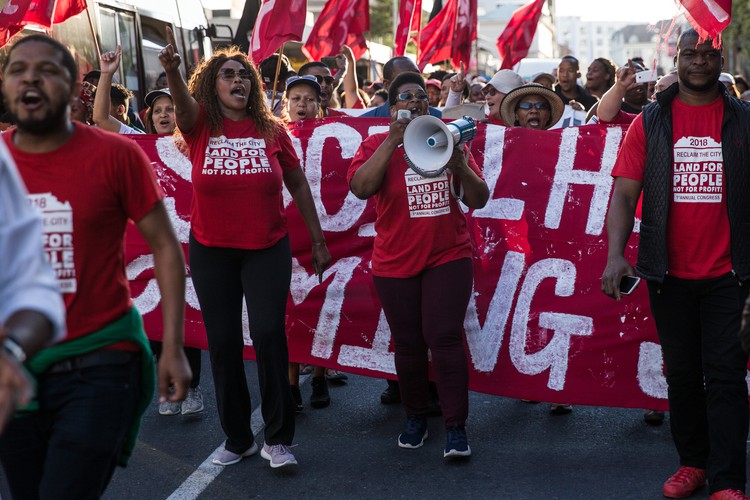 On Thursday evening, Reclaim the City (RTC) rallied close to two hundred people to march together through Sea Point, Cape Town, to create awareness of the upcoming Tafelberg site court case next week.

Tafelberg is a disused property in Sea Point owned by the Western Cape provincial government.

RTC has been advocating for affordable housing on the site since 2015 when the government tried to sell the property to a company that intended to develop a private school on it. Extensive campaigning temporarily stopped the sale, but the authorities decided to proceed with the sale in 2017. RTC and the Ndifuna Ukwazi Law Centre initiated a court case in 2017 asking the Western Cape government and the City of Cape Town to address “spatial apartheid” and to overturn the designation of the Tafelberg property as “surplus”. That case will be heard next week, more than two years later.

Marchers walked from the Sea Point pavilion to Checkers on Main Road and up the road to the Tafelberg site where they unveiled a banner that read: “Social housing coming soon”. The march ended at the Sea Point Methodist Church where people flooded into pews as music sounded throughout the sanctuary.

Zaida Wolhuter lives in the unlawful occupation of the disused Woodstock Hospital. After she was evicted two years ago, Wolhuter moved into the hospital — which activists call Cissie Gool House, named after a famous 20th century Cape Town civil rights activist — with her twins.

Wolhuter wants RTC to win next week’s case. “I would be happy because so many people need a place to stay. I’m going to fight alongside my occupiers. We want housing.”

Addressing the protesters in the late evening, Mandisa Shandu, a lawyer working on the case, described how colonialism and apartheid created segregated communities in the Western Cape. “A landless class was created on the premise of exclusion,” she said. She said that Tafelberg could be a “flagship project for integration”.

Following Shandu’s speech, RTC put on a skit highlighting the court case, and played a short video explaining the history of the Tafelberg site. A sign-up sheet was passed around for supporters to indicate which days they could come to court.

Chulumanco Mahlangabeza is 19 and she attends Camps Bay High School. She told the protesters how evictions affect a family from a child’s perspective.

She described living with her mother and grandmother in a backroom in Sea Point until they were evicted when her grandmother got cancer. They lived through several more evictions, which she said took a toll. “I’m glad to be a part of this movement,” Chulumanco said.

RTC spokesperson Zacharia Mashele told GroundUp: “Today we demonstrated power. We disrupted the busy main road of Sea Point to highlight and remind residents of Sea Point about the unlawful sale of Tafelberg. This piece of land was earmarked for social housing but the provincial government sold it off. We are ready to ask the High Court on Monday to undo this unlawful sale.”

The Tafelberg case will take place from Monday 25 November to Thursday 28 November at the Western Cape High Court. 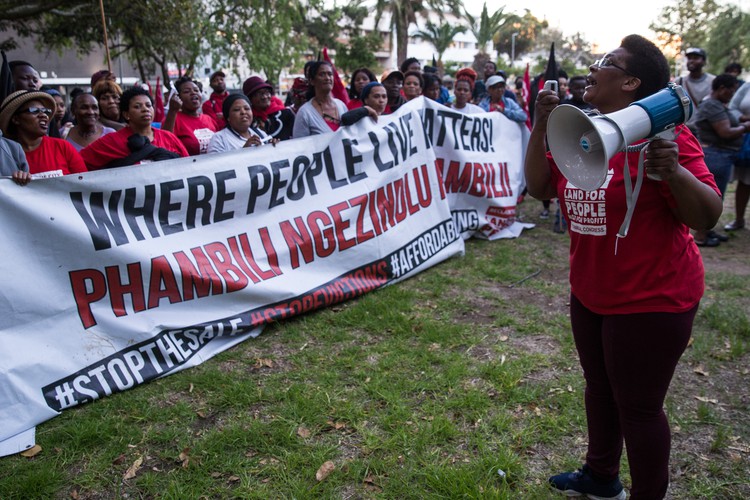 “We are here to remind the comrades that this is our home and this is our land,” said Reclaim the City activist Sheila Madikane. She said that they have been fighting for this land from the 1980s and that now is the opportunity to live here. “We belong in the inner city,” she said. Photo: Ashraf Hendricks