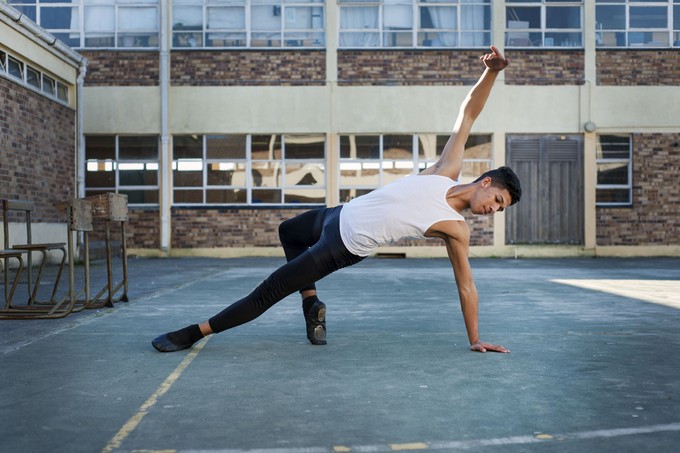 Fifteen-year-old Kyle Andrew Grant from Mitchells Plain has one ambition: to be a professional ballet dancer.

Though now she’s very proud of his achievements, his mother Carol Adams says she was worried at first when her son started taking ballet seriously in primary school.

“I was upset when he reached the higher grades and took up ballet as a subject.” She says she asked him why he didn’t want to play soccer with the other boys, but he just said:“Mommy leave me, I want to dance.”

Adams, 50, who works seven days a week as an administration manager at the Shoprite store in Blue Downs and doesn’t always have time to see Kyle’s shows, says he is “very determined and independent”.

“I think he takes after me.”

Today Kyle is a grade nine pupil at Alexander Sinton high school in Athlone. He spends his afternoons at the studios of non-profit organisation Dance For All, walking the two and a half kilometre distance to the studio after school.

His mother says he was teased sometimes at school about his choice of career, but it was never so bad that he felt he wanted to quit.

“Young people are who they are now, there’s less judgment,” says former principal dancer Philip Boyd, who started the dance academy 25 years ago. Society accepts male dancers more easily now than when he was a young dancer, he says.

“Young people have other issues now. Most of our students come from very difficult economic backgrounds.”

While the students don’t pay to be trained at Dance For All, costs of travel and equipment add up quickly. Kyle’s travelling expenses are around R700 a month and ballet shoes cost about R350 a pair, with new ones needed every few months. “The school helps out where it can,” says Boyd.

He says it costs R5 million annually to keep the school going and the money comes from fundraising events, like the recent 25th Anniversary Dance Gala held at Artscape, and from the National Lotteries Commission.

Students remain at the school until 19 or 20 years old. “Those who want to continue dancing, audition at schools like The UCT School of Ballet, Jazzart Dance Theatre, or the Cape Academy of Performing Arts,” says Boyd.

“I want to go professional and I want a sponsor,” says Kyle. He says he’d like to go overseas some day, and he needs to get his name “out there” so that when the time comes, he can attract the sponsors he will need.

Boyd says Kyle has natural talent and can go on to have a dance career. “He’s quite confident.”

Race and sexuality and gender norms are not big issues for Kyle. The biggest obstacles between him and his dreams are economics and an understanding of what success looks like. He’s had a taste of where he could be, and has an idea of how to get there.

Kyle will be competing with his school in the annual High School Jam on 20 and 21 August at Grand West Arena.

You can donate to Dance For All via this webpage:
http://danceforall.co.za/support-us/donate-now/