Project is several months behind schedule 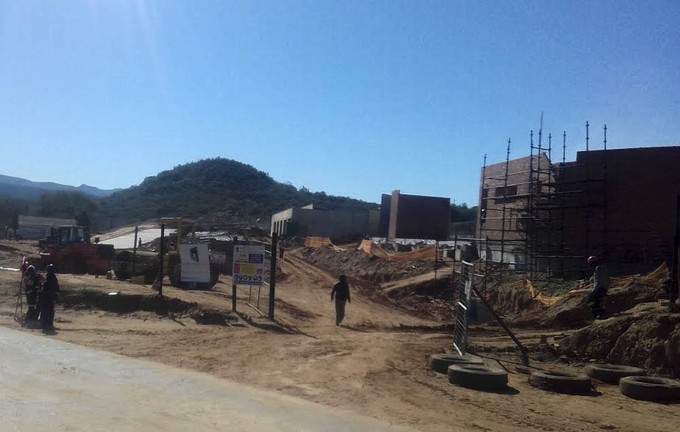 Construction of the Sarah Baartman Remembrance Centre in Hankey. On the left is the koppie where Saartjie Baartman is buried.

Construction of the R164 million Sarah Baartman Remembrance Centre in Hankey, Eastern Cape has been delayed by labour disputes and is several months behind schedule.

The project was to breathe new life into the little towns of Hankey and Patensie, where the main form of employment is work on citrus farms.

Occupying more than four hectares of land in Baartman’s home town of Hankey, near the site where she has been buried, the centre is to include a museum, archives, a garden, shops, an auditorium, classrooms, and parking. None of these have been completed.

The project has been plagued with work stoppages as workers on the project complain that they are being under paid and paid late. They say they should fall under civil construction and not general construction and earn R250 a day instead of R150 to R180. They argue that they have been building roads at the site.

One worker who did not want to be named said others had been dismissed after protesting. He said 15 workers had taken the company to the CCMA (Commission for Conciliation, Mediation and Arbitration) and got their jobs back.

Another worker complained that employees from Zimbabwe and Malawi were paid more than South Africans and that workers from Limpopo also earned more than locals.

Derrick Jaffon, chief liaison officer of the construction company, Lubbe Construction, said the project would now be completed in February next year.

He said 150 people were employed on the site.

“We can finish the project next year around February, if we work without labour stoppages. The last two years were a challenge because we had numerous labour disputes. This time I hope we will undergo constructive discussions with the union and the workers. “

Some of the workers are members of the Association of Mineworkers and Construction Union (Amcu). Amcu shop stewards contacted by GroundUp did not want to comment on the labour disputes before engaging with the company.