“We will fight even if we get arrested” says student 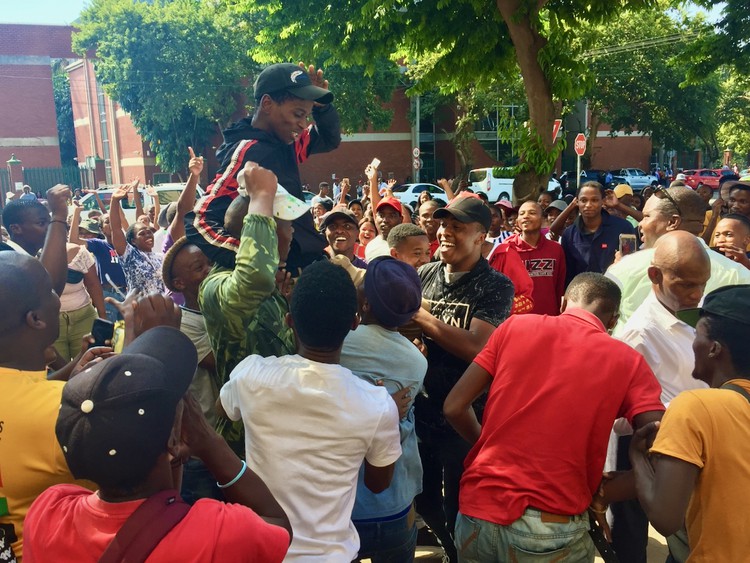 Students from five TVET college campuses chanted and sang songs outside the Pietermaritzburg Magistrate Court on Thursday in support of their fellow students. Photo: Nompendulo Ngubane

Five TVET College students from the Northdale campus in Pietermaritzburg arrested during a student protest last Wednesday have been released on bail of R300 each.

The students appeared in the Pietermaritzburg Magistrate Court on Thursday morning. Students from five campuses chanted and sang songs outside the court in support of their fellow students.

Wanda Jili, Msawenkosi Makhaye, Mbuso Ngubane, Ayanda Zondo and Thubelihle Buthelezi were among those involved in ongoing protests in TVET colleges in KwaZulu-Natal.

Students are complaining about not being paid by the National Student Financial Aid Scheme (NSFAS). Some students said they have not been paid by the fund since 2019.

Student Representative Council (SRC) member Thandeka Nxumalo said, “Until NSFAS pays, we won’t stop protesting. It’s the third month now without any payment. We will fight even if we get arrested.”

“We are here to support our soldiers,” said Linda Mnguni from UMgungundlovu campus. “Our brothers were arrested during a protest on Wednesday at the Northdale campus. They were protesting because they have not been paid and have no place to sleep. Every year, we fight over the same thing with our college and the scheme … Justice must be done and we will not stop fighting.”

According to NSFAS administrator Dr Randall Carolissen NSFAS wallet has paid out R1,533,468 as an upfront payment for allowances to funded students at uMgungundlovu TVET colleges prior to NSFAS receiving confirmation of registration data from the college. He said NSFAS has made an advance payment of R5.2 billion to all institutions.

Carollisen said the advance payment is meant to cover the registration fee and the first payment of allowances.

“We further made a second payment to assist students for March 2020. NSFAS received registration data from the institution, subsequent to that NSFAS will use that registration data to determine the exact monthly to be paid in allowances. Automated and regular payments will proceed from end of March 2020,” said Carollisen.

National chairperson for Radical Economic Transformation (RET) Nkosentsha Shezi said they had assisted the students by providing them with lawyers. “We are happy that the students were released on bail. The team will continue helping students in fighting for their education. We are doing this in all the colleges who needs our help,” he said.

Students will appear in court on 13 April facing charges of public violence.