Learner says Water Explorer programme taught them different ways to use water sparingly beyond just turning off the taps. 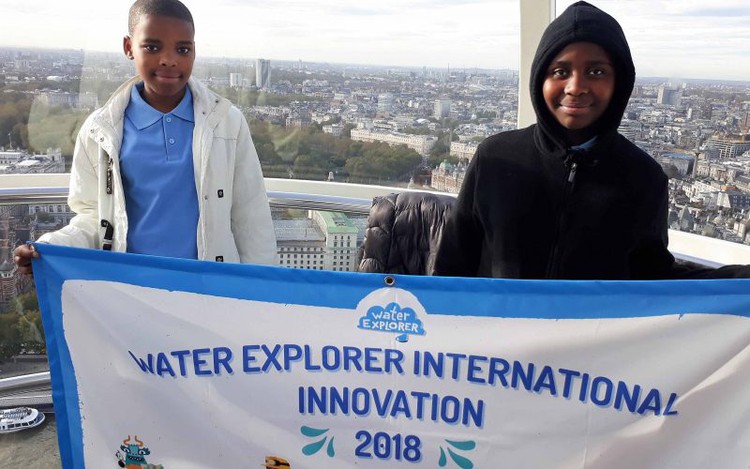 Asiphile Mkhonde and Esihle Gasa of Ebomvini Primary School in KZN flew the flag for South Africa at the international Water Explorer event in London in October where they scooped two top awards. Photo: Bridget Ringdahl

A KwaZulu-Natal school has made waves at an international water conservation competition in October, winning two top awards.

Learners from 11 participating countries including Turkey, Germany and Malta, agreed that Ebomvini’s projects were creative. They were also impressed with the learners’ ability to make the projects work despite having limited resources.

These included turning chip and sweet wrappers — which often end up in local rivers — into eco-bricks which were used to make outdoor furniture. This won Ebomvini the Innovation award.

Esihle Gasa and Asiphile Mkhonde, grade 7 learners at Ebomvini, presented their school’s projects at the event. For both of them, it was the first time they left their home province of KZN and the first time they travelled abroad. They were accompanied by their teacher, Youth Mavundla.

“Did you know that it takes ten litres to make 1 A4 piece of paper?” said Asiphile aged 12. “There is ‘secret water’ in everything we use and eat.” She said the Water Explorer programme taught them about different ways to use water sparingly beyond just turning off the taps.

Speaking after the awards at the headquarters of HSBC bank, in London’s Canary Wharf, Esihle said, “It made me so happy to meet children from other countries and to hear about what water projects they have been doing.”

Ebomvini was picked to represent South Africa after impressing a panel of judges in August. Some of their projects included safeguarding a local wetland and building a pond to attract frogs into a permaculture garden. Other learners from the school also played at active role in the design, execution, maintenance, and monitoring of the projects.

When they returned home, the Ebomvini team were again honoured after their school won yet another international award - International Youth Water Air and Food Awards - which recognises community inspired efforts to make a difference to water management.

This article was produced by Roving Reporters for GroundUp.