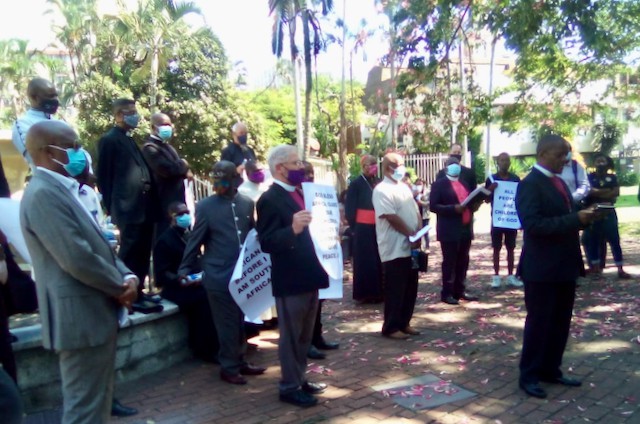 Religious leaders under the KwaZulu-Natal Christian Council gathered on Thursday to express solidarity with those affected by xenophobic attacks in Durban in recent months.

The event in Medwood Gardens, opened by Cardinal Wilfrid Napier, was attended by about 100 people.

Reading a statement, Reverend Musa Zondi said, “Such violence is unjust and further foments anger, frustration and hopelessness among our own poor and unemployed. We strongly advocate for dialogue, mutual acceptance and collaboration as God’s way of enabling South Africans and foreign nationals to rise above their dire circumstances.

“We encourage all South Africans to practice Ubuntu with our foreign brothers and sisters. We appeal to all political, business, civic and religious leaders across KZN and South Africa to remember that victimising foreign nationals undermines and contradicts our own struggle for liberation from colonial occupation and racial oppression in which many of our African sisters and brothers supported and sustained us at great cost to themselves.”

Since the Covid-19 pandemic hit South Africa, many refugees have been unable to apply for asylum as Home Affairs limited or stopped services for them.

The church leaders committed themselves to ongoing work where they have influence, in particular developing a theology of reconciliation and hospitality, providing relief to both South Africans and immigrants, praying for peace and transformation, and making communities into safe places for integration.

Gaby Bikombo, from the Refugee Social Service, said, “The biggest challenge at the moment is that many of them [immigrants] are not working because of these attacks … They need to go back to work and we need to see action and more engagements between government and refugee organisations to find a solution.

“What action is government taking against these people who claim to be MK Vets? Because Chiliza [Provincial executive committee member of uMkhonto weSizwe Military Veterans Thanduyise Chiliza] says they know nothing about these attacks and he assures us that it is not them,” said Bikombo.

Jean-Marie Ntamubano, of the Denis Hurley Centre, also called for Home Affairs to open the refugee reception centres. He said refugees were “with no source of income”.

“They want to go back to their tables to trade,” he said.

Chiliza said the MKMVA is against the xenophobic attacks. “It is upsetting because they are dragging the name of the real MK Vets to the ground.”