#DodgyLottery part two: The National Lotteries Commission has denied that companies linked to its COO are involved. We present evidence to the contrary. 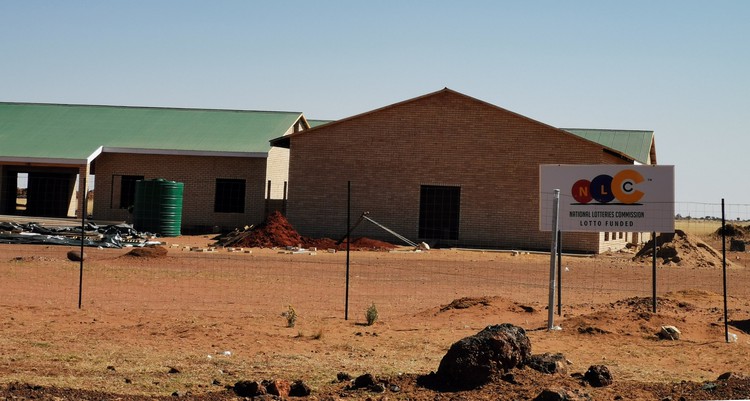 This incomplete old age home in Kuruman is funded by the Lottery. Photo: Raymond Joseph

The companies are PKT Consulting, which is involved with the construction of an old age home and library and museum complex, and Kaone Wethu, which is involved at the old age home. The links between these companies and Letwaba are explained in part one of this series: Conflicts of interest and incomplete projects: How Lottery money is being spent.

The NLC has denied these companies are contracted to the two projects, but in this article, we present evidence that they were indeed involved, at least on 19 February 2018.

In response to questions from GroundUp, the NLC said that Letwaba denied any conflict of interest in the granting of funding and has referred the matter to his lawyer. Letwaba has not answered questions we’ve sent to him via his lawyer.

GroundUp visited Kuruman in July to investigate three different projects funded by the Lottery worth almost R60 million. All three received proactive funding in 2017. Proactive funding allows the Minister of Trade and Industry or the NLC to choose projects to fund before receiving applications.

The Kuruman projects that were funded are the Lethabong Old Age Home for R23 million, the Credo Mutwa Museum and Library for R19.6 million, and the Sanctuary Drug Rehabilitation Centre for R17 million.

In this story, we report primarily on the Lethabong Old Age Home. In parts three and four we will report on the other two projects.

Despite receiving R23 million, the old age home is still under construction almost two years later. It lay dormant with very little construction happening for much of 2018, followed by a flurry of building activity from March or April this year.

As the attendance registers below show, PKT Consulting and Kaone Wethu had representatives present at site meetings related to the old age home and Credo Mutwa museum and library complex on 19 February 2018. The same two people who represented PKT at the museum meeting were also present at a site meeting at the old age home on the same day. Copies of the registers were shared with all those who attended. 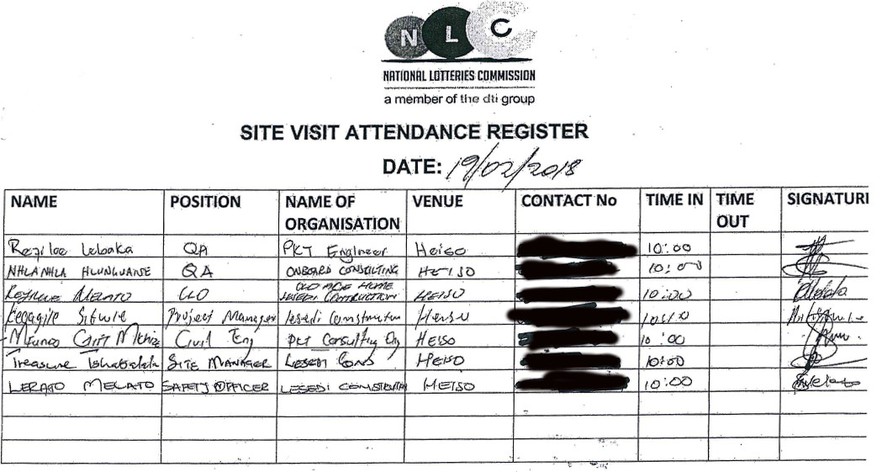 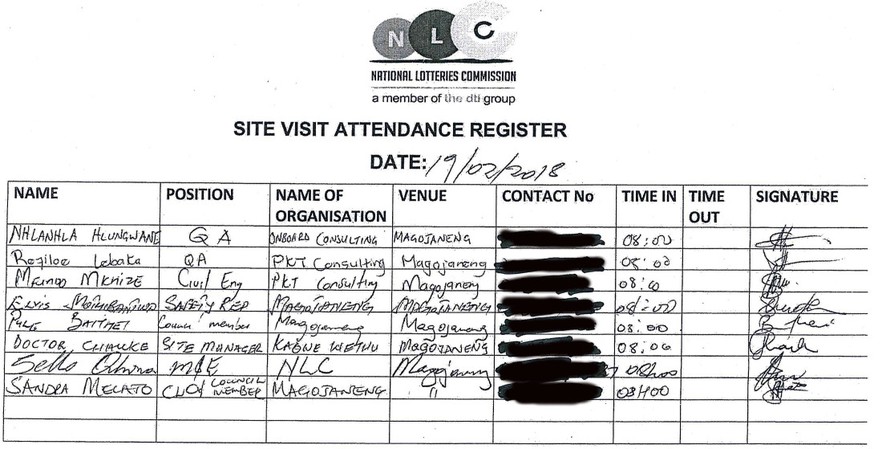 The top site attendance register is for the old age home. The bottom one is for the Credo Mutwa museum. Both are for 19 February 2018. (GroundUp removed the telephone numbers.)

On the same day, at a site meeting at the old age home, both Lebaka and Mfunzo again signed a register as representatives of PKT.

Despite being paid millions in October 2017, the old age home is still unfinished, with parts of the facility still under construction.

Construction on the home was due to begin in January 2018 and take four months to complete, according to the funding agreement Lethabong Old Age, an NPO, signed with the NLC. A further R1 million a year for three years for running costs was included in the contract.

There was very little progress on the construction of the home throughout 2018, with photographs taken in December showing some foundations, a few buildings at window height, and stacks of bricks and other building material on the site. 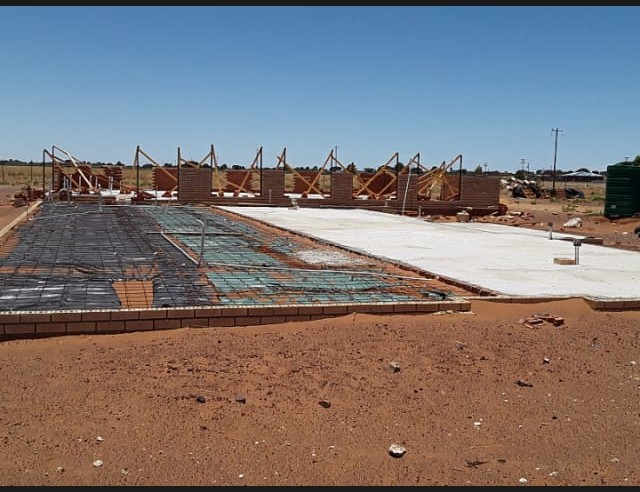 This photo of the site where the old age home is being built was taken in December 2018.

The NLC was apparently so concerned about the delay that COO Letwaba visited Kuruman in January this year to investigate. According to local residents construction began in earnest in March or April.

When GroundUp visited in July there was no apparent activity on the site, although there are now several buildings nearing completion on the fenced-in property. A truck loaded with bricks and other materials was seen arriving at the site. 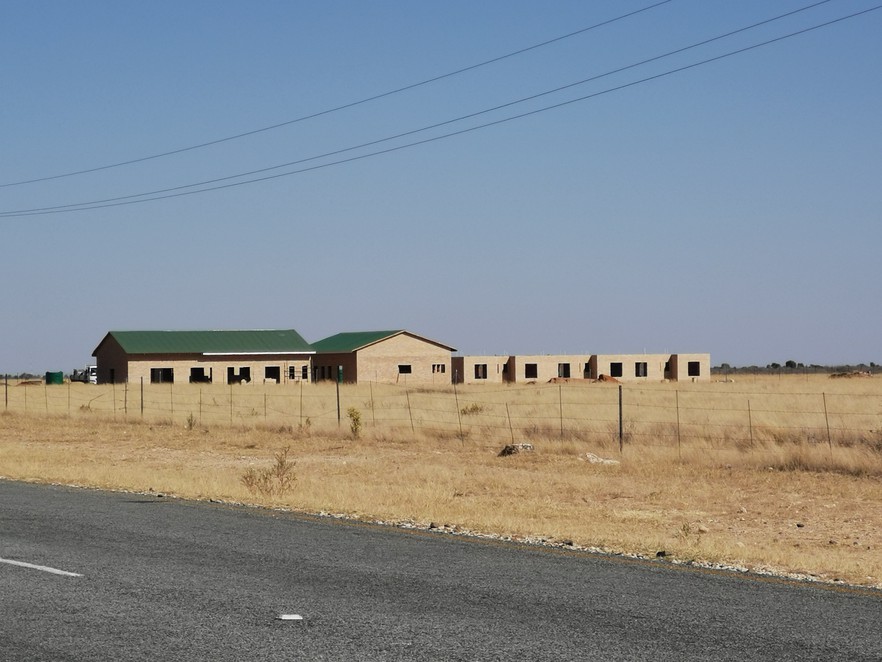 This photo (as well as the main photo on this article) was taken in mid-July. It shows that the old age home is still under construction almost two years after the NLC paid over at least R20 million of a R23 million grant. Photo: Raymond Joseph

Slow to build, but quick to get the money

The decision to proactively fund six old age homes in rural areas in North West, Mpumalanga, Northern Cape, Limpopo, Free State and KwaZulu Natal, to the tune of R23 million each was taken at a special NLC board meeting on 28 August 2017. It is unclear how Lethabong was chosen, or if a call for organisations to develop old age homes was ever advertised or put out to tender by the NLC.

But from the date of the decision to fund old age homes, Lethabong moved rapidly and two weeks later, on 11 September 2017, an application for R23 million in funding was submitted to the NLC. Three days later the NLC wrote to the board of Lethabong informing them that their application had been successful. A contract was signed between the NLC and Lethabong on 15 September, and just over a month later, on 24 October, the first tranche of R20 million was paid to the organisation.

Many organisations that have applied for Lottery funding will be surprised by this astonishingly quick turnaround time.

There is also a discrepancy with the NPO number, 079-579, used by Lethabong in its application.

A search for this number on the Department of Social Development (DSD) NPO register returns details for the Boikanyo Pre-School in the North West Province, which was registered on 19 May 2010. But a search for Lethabong Old Age returns four hits, two in Limpopo and one each in Gauteng and Northern Cape, where Kuruman is situated.

According to the DSD records, Lethabong Old Age in Limpopo was registered as an NPO on 4 November 2010 — the date provided on the Kuruman grant application — with the registration number 078-759. Even if this was an error with the NPO number on the application, it shows that the NLC failed to properly verify it. A cursory check would have led them to the Boikanyo DSD listing.

Since the Northern Cape Lethabong Old Age was only registered with DSD as an NPO a few months ago, on 15 April 2019 under the number 226-372, it may have used a sister organisation in Limpopo as a conduit to apply for funding. Nevertheless, Lethabong supplied a Kimberley, not a Limpopo address, in its application.

Responding to a question about the registration number inconsistency, the NLC said: “This is not correct, according to our records Lethabong Old Age Home was the implementing organisation and not Boikanyo as your source(s) alleges. In our records, the funded organisation was registered in 2010 and this has been verified independently with the Department of Social Development.”

Exaggerating the number of beneficiaries?

“This is what we call indirect beneficiation,” the NLC said in response to our questions. “Part of the project objective was to deal with the burden put upon kids in looking after the elderly, create direct and indirect jobs for youth and people with disabilities based on the impact assessment.”

In fact, the application states that there will be 300,000 “indirect beneficiaries”.

A source with knowledge of the project, who asked not to be identified as they feared victimisation, said that service agreements were yet to be concluded with national or provincial government departments or other suitably qualified service providers to staff and run the facility after completion.

But the NLC said: “As this is a proactively funded project the NLC is at this point embarking on assistance for licensing of the facilities, capacitating the caregivers in collaboration with DSD and ensur[ing] a proper handover of the facility for sustainable care by the DSD.” 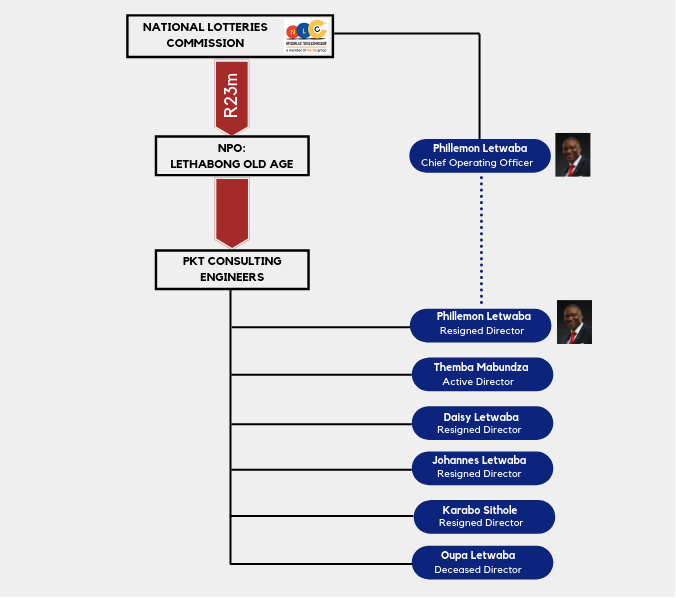 Diagram showing the relationship between PKT Consulting Engineers, the Lethabong old age home in Kuruman, Letwaba and his family.