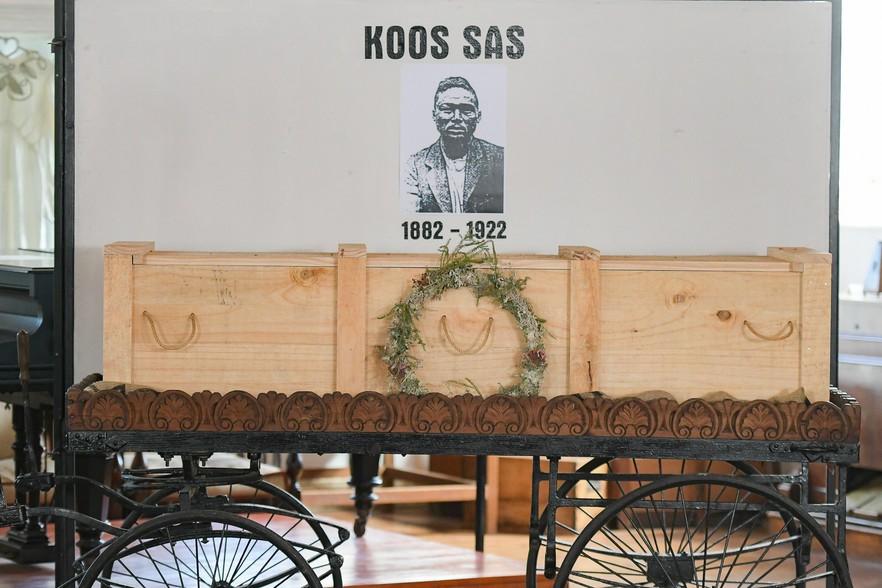 The skull of Koos Sas, which had been kept in a glass case in a museum, was placed in a casket inside a wooden coffin. Photos: Jeffrey Abrahams

A painful chapter in Karoo history was concluded on 18 April when the skull of Koos Sas, who was killed nearly 100 years ago in Springbok, was buried in Montagu in a ceremony conducted by Khoisan leaders.

Sas, a sheep rustler who was accused of murder, is seen as a hero among Hessequa Khoisan. 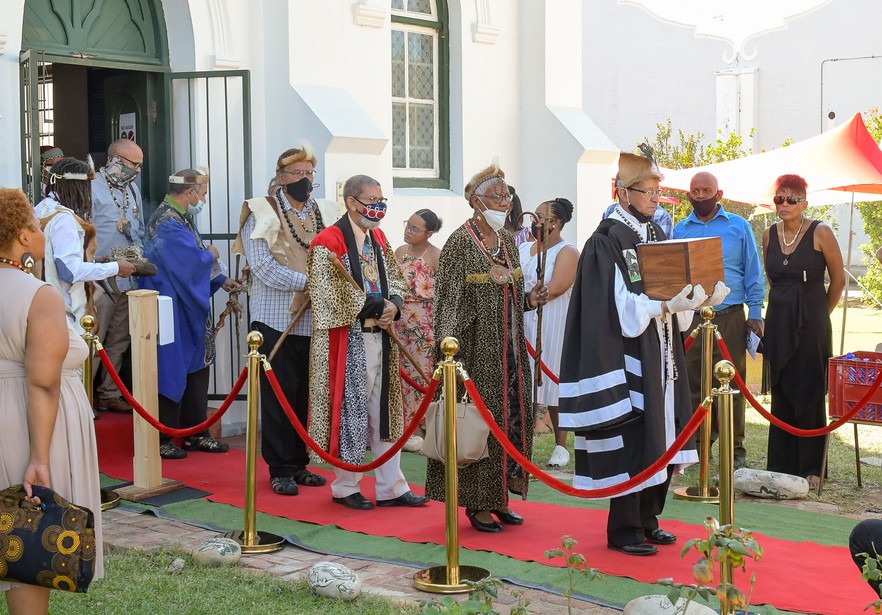 Hessequa leader and chaplain Reggie Boesak led the procession carrying the skull in its casket.

The skull was placed in a casket and the burial procession moved from the Montagu Museum, where Sas’s skull had been kept on display for years, to Cogmanskloof where it was interred. 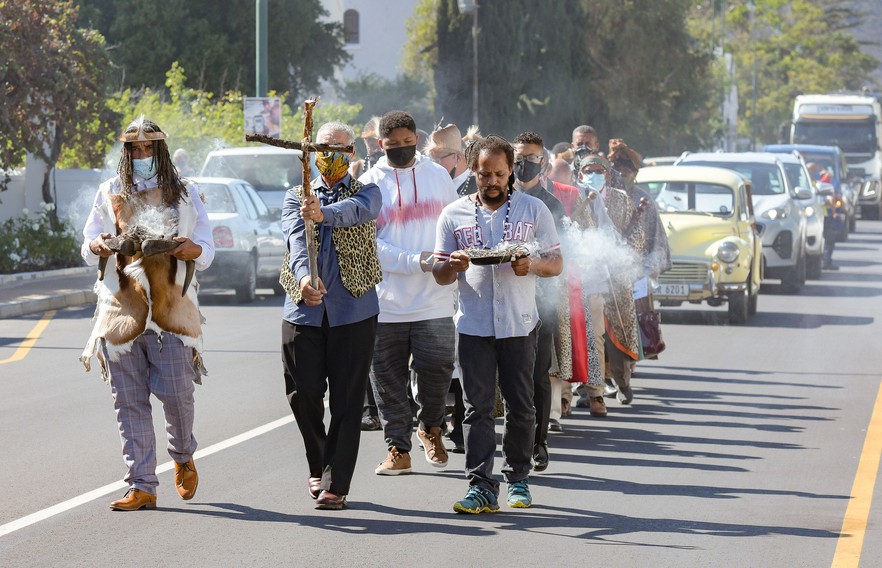 The procession moved through the streets of Montagu.

According to official records, Sas was a sheep rustler accused of murdering a shopkeeper, who was the son of the dominee. He was arrested and the trial was transferred to a higher court in Worcester, but before the trial could begin Sas escaped from custody, as he had done many times. He was declared an outlaw, one who had no rights and who was without any legal protection (in Afrikaans “voëlvry”). This was effectively a death sentence that could be executed by anyone.

Five years later, on 8 February 1922, he was spotted in Springbok, some 600km away, and shot. The dominee there had a photograph taken of his body and printed postcards of it, with proceeds going to the Afrikaans Christian Women’s Association. He was later decapitated and his skull ended up in a glass case in the Mission Church Museum in Montagu, with the rifle which had been used in the shooting.

His story was told by musician David Kramer in Die Ballade van Koos Sas, which later became the musical The Last Bushman of Montagu, a title Sas is said to have claimed for himself.

In March, nearly 100 years after his death, the skull of Koos Sas was ceremonially handed back to Reggie Boesak, leader of the Hessequa Khoisan, by provincial minister of culture and sport Anroux Marais in Montagu, removed from the glass case and placed in a casket in a wooden coffin. 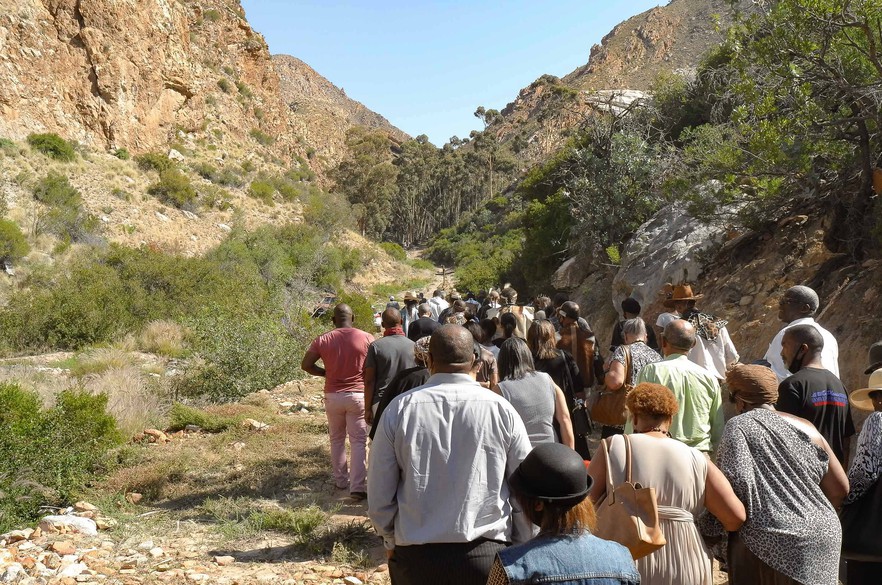 The funeral party followed the casket up Cogmanskloof.

To the Hessequa Khoisan, Koos Sas was a hero and a symbol of resistance against their oppressors. His actions, say Hessequa leaders, should be seen in the context of how they as a people were treated. He was sentenced to death, hunted and shot without a trial. The postcard depicting his remains showed that he was not regarded as human and his skull was put on public display as if it were a hunting trophy.

His remains are now interred on a ledge near an overhanging rock in Cogmanskloof. Boesak said the event laid the foundation for forgiveness, reconciliation and peace. 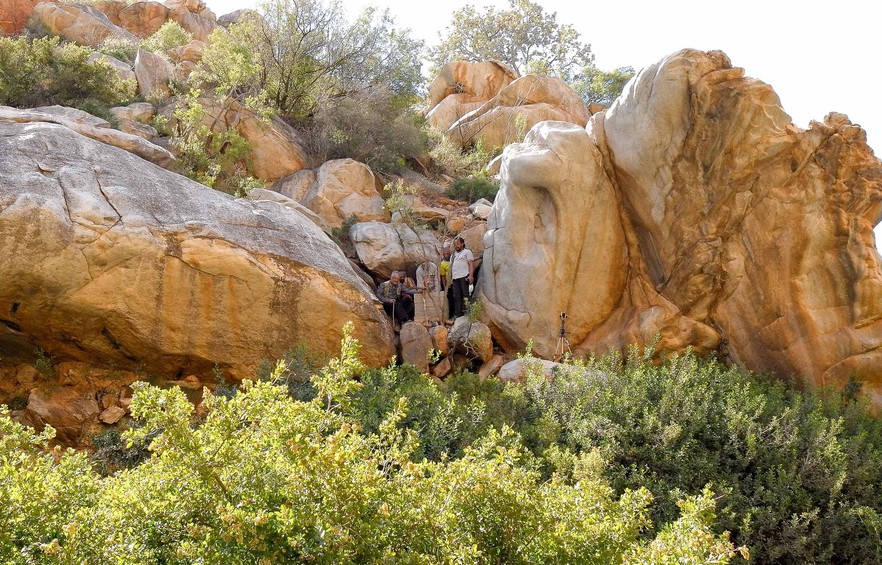 Koos Sas’s skull has finally been interred, on a ledge near an overhanging rock in Cogmanskloof.